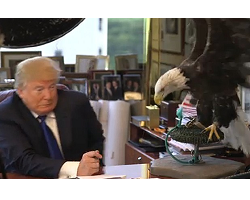 Trumps quest to kill free speech by repealing Section 230 has come to an end. The Senate has voted to override Trump’s NDAA veto.

Late last year, outgoing president, Donald Trump tried to kill free speech online by demanding the repeal of Section 230. Thanks to Trump losing the US general election to Joe Biden, time is growing increasingly short to cause further damage to the Internet. So, in a last ditch effort, Trump demanded that the repeal of Section 230 be attached to the NDAA. When he didn’t get what he wanted, Trump carried through with his veto threat and defunded the military.

As it turns out, in Congress, lawmakers wound up giving a sharp rebuke and voted to override Trump’s veto. The override requires a supermajority, so both Democrats and Republican’s have to, to a certain degree, vote in favor of the override.

That left the Republican controlled Senate. On the outset, some worried that the vote would be close. As a result, the risk is that the NDAA veto override would not be successful. Indeed, Lindsey Graham said that he will vote against the veto override. So, this did raise the question of whether Graham would be able to influence enough Republican’s to vote his way.

By New Years Eve, the signals coming from the Senate suggest that Graham may not get his way. Word was that the Senate will have enough votes for a veto override. This put the efforts to kill Section 230 in serious doubt.

Now, we are seeing reports surfacing that the US Senate has, indeed, voted to override Trumps veto. From USA Today:

The Senate on Friday overrode President Donald Trump’s veto of the National Defense Authorization Act (NDAA) — the first congressional override in Trump’s tenure as president and a final rebuke of the president just weeks before he leaves office.

The House of Representatives on Monday voted 322-87 to override the president, a remarkable bipartisan condemnation of the president in divided Washington. The Senate voted 81-13 in favor of overriding Trump, and the NDAA will be enacted into law despite Trump’s disapproval.

The article doesn’t offer a vote breakdown, but we were able to find it via the official Senate page:

This ultimately means that the NDAA is now law without a Section 230 repeal. As a result, there is nothing Trump can do to stop this from becoming law now that we are aware of.

What it also means is that this could be the final nail in the coffin for Trumps effort to repeal Section 230. There is, of course, efforts to tie COVID relief funds to the repeal of Section 230, but many observers note that this effort is doomed to fail. So, the quest to end free speech on the Internet has become the latest Trump failure in a legacy jam packed with failure. In this case, with respect to Section 230, it is a win for digital rights.

Of course, as we pointed out previously, things aren’t quite so simple, though. While Section 230 is protected for now, there are other bills attached to the NDAA. This includes the CASE Act as well as the felony streaming bill. This means that those who fight for digital rights have a lot to work on to try and undo the damage caused by those two pieces of legislation that would otherwise never pass.

Plenty of work left to do to to try and fix what this development breaks, but Section 230 is very likely surviving Trump.