There’s been multiple Sega console releases over the years. While there are emulators that emulate one system or another, there is the Kega Fusion that can emulate a large number of them. This guide shows you how to emulate Sega games with this particular emulator.

The first thing is to go over to the Kega Fusion website and download the latest version of the emulator here. Since this emulator is cross-platform, you can select an emulator based on the operating system you are using.

If you are using a Windows operating system, download the Windows version. You’ll get a zip folder. Once you have downloaded this zip folder, find a convenient place on your hard drive and create a folder for your Sega related needs. In that folder, create a folder for your emulator. Next to this folder, I’d make another folder for all your ROM/CD images. Go into your Kega Fusion folder. Next, extract the contents of the ZIP archive you downloaded into the emulator folder. After that, go back into the Sega folder and put all your ROM images into the ROM folder you created. Once that is sorted, go into the emulator folder and double-click on the Fusion.exe file to start the emulator.

When you open up the emulator, you’ll get a screen like this: 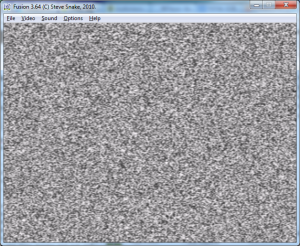 The first thing you should do is set your controller keys. Unlike a number of other emulators, this is done a little differently in this emulator. First, you go into the “Options” drop down menu and then click on “Set Config”:

From here, you’ll want to go to the “Controller” tab that’s on the top of the screen. From there, you can set the two different controllers found on these Sega systems. The first is the Genesis/32x/Sega CD controllers. Click on the define button on the same line as “Port 1” (this is the first player controller). Clicking on this forces you to define every single button, so you’ll have to think carefully on what keys are most appropriate. If one key seems off, you’ll have to re-define every key all over again. Once done, do the same thing for the Master System/Gamegear Controllers (again, “Port 1”). I’ve highlighted all of these buttons and the tab in question below:

Once done, you can test out a ROM/CD image. In order to do this, click on the “File” drop-down menu:

As you can see, you have to know which ROM goes with which system. Since this is an emulator that emulates multiple systems, you have to work with this fact when opening each game. If you load a game using the wrong opening option, you’ll get an error and a black screen. If you don’t know what the console system goes with the game in question, try looking at the name. Sometimes, games have a “32x” in the name. this is a dead giveaway in figuring out that the game belongs to the 32x system. Other games aren’t so obvious, so it may be a case of trial and error to get it working. Alternatively, you can Google the name of the game and “Sega” to figure out which system the game plays on.

Finally, The save and load states buttons are fixed to F5 and F8. You can have different slots for each game and scroll through them with F6 and F7, but there is no customization in this area.

That should be it! If you run into an issue of needing BIOS files, just search around for it. While we can’t say where those files are, we can safely say that those files aren’t at all hard to find. Just extract the BIOS files into a folder that will be easy to find and then point the emulator to those files by going in to the Options>Set config>SMS/GG tab and clicking the Browse button in lines that correspond to the proper BIOS file.