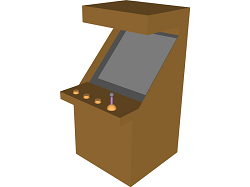 Arcade video games have been around for a very long time. They have been around since the NES console all the way up to more recently produced console gaming systems. In fact, there are a number of games that started out in the arcade system that were later ported to the video game console. Wouldn’t it be nice to play some of these arcade games? In fact, you can with the MAME emulator. This guide shows you how to do just that.

The first thing you need to do is download the MAME emulator. You can do that by going to the MAME website and download the latest copy of MAME from the release page. While the actual file itself is a .exe file, this is actually a self-extracting compressed archive. So ultimately, you aren’t actually going to go through the process of installing something (the file name says “binaries” after all).

Next, find a convenient place on your hard drive for all of your arcade game needs. Next, double-click on the MAME .exe file to extract it. Select the arcade folder and extract. While in most other emulation guides, I recommend creating a separate ROM folder for the purposes of having a sort of “community” directory that can be shared by multiple emulators, MAME has a very explicit location that it wants to read ROMs from. So, rather than messing with this, we are just going to keep things simple and say, “OK, whatever you want, MAME. we won’t question it.”

When you finish extracting the files, you’ll now need to find a place to put your ROM images. These image files are to be placed in the “roms” folder of MAME. Each game must be placed in its own folder in order for MAME to have a chance at functioning properly.

Arcade games come in a variety of formats, but putting them in correctly name folders can save a lot of headaches. So, for instance, if you have Robotron 2084, you’ll want to create a folder called “robotron” and dump all of the files in there. If you are finding ROM files around the web, stick to the name format given on the file name of the archive if there is one. 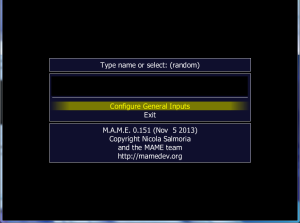 From this menu system, you can find your controls in the “Configure General Inputs” (I’ve got this highlighted in the above screenshot). Hit enter when you have this option highlighted. As this is emulating the arcade, you’ll end up with a massive number of different possible keys to choose from (anything from button1 to bet to stop reels, etc.). It can be hard to really discern which buttons you’ll be needing, but two very important keys are “5” (to insert coin) and “1” (starts the game). To get back out of the menu, simply use the arrow keys to scroll all the way to the bottom and hit enter to go back to the main menu.

I found that, once you start a game, the first little bit is just trying to find all the keys that make you do things. This is simply trial and error, but once you have the keys down, you should be good to go in the game.

To make a save state, use “ALT+F7” at any point in the game. From there, you can select a key (like “Q” to name your save state. To load a save state, press “F7” and hit that key again. MAME developers do note that save states can be fragile and may break between different versions of MAME. So do know that this feature may not work for every game.

When you are done with the game, simply press the “Esc” key to go back into the menu again. Highlight “Exit” and hit enter in the menu to exit out of the emulator again.

The game I have says that there is missing files. What’s going on?
If this game uses a CHD file, make sure all of the file names are the same (excluding extensions of course). Another possibility is that a file is compressed. While MAME says it can read compressed file types, this seems to only apply to certain kinds of files. So, making sure all files are not compressed in .zip, .rar, or .7z might also help with this. Generally, ROM images actually require more than one file in a lot of cases. Games aren’t contained in a single file like numerous other cartridge-based console systems.

How do I know if a game I have is compatible with MAME?
There are a few compatibility lists floating around the web, but some can be specific to a certain version or a certain variation of MAME (i.e. MAME32). MAME, generally, is very good about letting you know if a game is compatible or not. Just dump the files in the roms folder, boot up MAME and highlight it in the games list. If there is a red warning box below it, then it may not be compatible or may be broken in some way. Incompatible games also give the game name faded text as well. Still, the only reliable way of knowing for sure if the game you have is compatible is to let MAME look at it and tell you.

There are apparently front-ends floating around. What are they?
In some respects, you can think of front-ends as MAME, but with a nice and shiny user interface – possibly with other features that are supposed to make managing MAME a little easier. I personally found it fairly straight forward to use MAME as-is, so I have never tested them. Still, if you are interested in them, you can always test them out if they look interesting to you.

The game get’s stuck on a manufacturing/testing message and doesn’t start. What next?
When it’s going through those messages and you get stuck, restart the game and press F2. You only have to do this on the first run. After that, the game should work fine without needing to press F2.