In this sixth part of our Photoshop guide, we take a closer examination of the free transform tool and then discuss the warp tool.

In the previous part our our guide, we discussed things like the liquefy tool and the clone tool. Now, we are going to talk about two more tools. Those tools are free transform and the warp tool.

Promoting a brand can be tough. So, anything to get a small advantage can be useful. Let’s say you want to test the waters on a new coffee cup design. All it is is your logo plastered on a coffee cup. You could spend the money to have it printed on a cup as a custom design, then take a picture of it after. The cool thing is that you get the prototype design. The only problem is, what if people have no interest in such a design in the first place? You might have spent that time, money, and effort for nothing.

Well, there is a quick and dirty way to create that picture without the need to make that cup in the first place. We can Photoshop our logo onto that coffee cup. First, we are going to take our picture of the coffee cup, then convert it into layer 0 so we can edit it. After that, we are going to add another layer and copy and paste our logo into that second layer. The end result I got was this:

The problem is quite obvious: the logo is too small. We can’t scale the logo up, but what we can do is scale the coffee cup down. So, I’m going to temporarily lock down the layer with the logo as it’s fine in the middle for now. Next, I’m going to use the rectangular marquee tool and, with the other layer selected, select the entire image.

After that, I’m going to get the free transform tool.

To access it, click on Edit, then Free Transform (Ctrl + T if you want the speed key).

Next, while holding down shift, I’m going to click and drag the top left corner and shrink it down. Shift is going to maintain the pictures aspect ratio.

After that, we can click and drag the image to the centre (note that the middle anchor will not move the picture). After that, I just make slight scaling adjustments so the picture looks about right for the size of the logo. When I’m happy with the adjustments, I can click on any other tool (in this case, I clicked on the zoom tool because I will need it next) and Photoshop will ask me if I am happy with these changes. All I do is hit the “Apply” button.

Now, the next problem is that the logo just appears slapped on. So, we are going to lock down the cup layer and unlock the logo layer. After that, using your rectangle marquee tool, we are going to select the entire logo.

Next, I’m going to get my free transform tool like before.

Now, the thing I’m going to look at is the angle of the cup. We are kind of looking at the cup from the top a little. This is to help show off the contents of the cup.

So, I need to make the logo imitate the angle. First thing I’m going to do is squash it down. All I do is just click on the top anchor and click and drag it down a little.

Now, I’m just going to bump it to the left a little. After that, I’m going to rotate it. To rotate the image, just hover your mouse over the area just outside of one of the corner angles. In the above screen shot, I highlighted roughly where I clicked to start rotating the image.

When I’m happy with the rough angle, I can select another tool to bring up the pop up screen asking me if I’m happy with my adjustment. All I do now is hit “Apply”.

Now, at this point, it still looks sloppily added in, but at least there was marginal effort. This would be your rough adjustments. The next stage involves using the warp tool which is the subject of the second half of this section!

So, we got our image more or less placed on the cup, but it definitely doesn’t look like it is actually a part of that cup. So, what we need to do next is to utilize the warp tool.

With your object still selected, just go into Edit, then Transform, then Warp. It’s a bit more buried than most, but it is certainly present.

With the Warp tool selected, you’ll see a new grid appear over your object. There are a lot of added handles you can use to custom morph the picture onto your cup. Generally, you have to keep in mind the nature of the object that you are attaching the image on to and conform the second image to that object. In this case, the object is a cup and I have to keep in mind the cylinder nature of the cup as I move the handles around.

So, after some fiddling around, we got something that is reasonable. I could spend hour just tweaking and adjusting, but for the purpose of this tutorial, you’ll be able to see the effect warping has on the logo.

So, for those with a keen eye, you’ll notice that the lighting is all wrong. It looks OK proportionally, but it’s obvious that someone just digitally inserted this in. So, the next stage would be to fall back on our previous knowledge and add some transparency. This will allow some of that cup to shine through. Now, we did fiddle around with one kind of transparency, but Photoshop offers a whole suite of different kinds of transparency. So, experiment around and figure out what is best suited for the situation. You might be impressed with what you find. 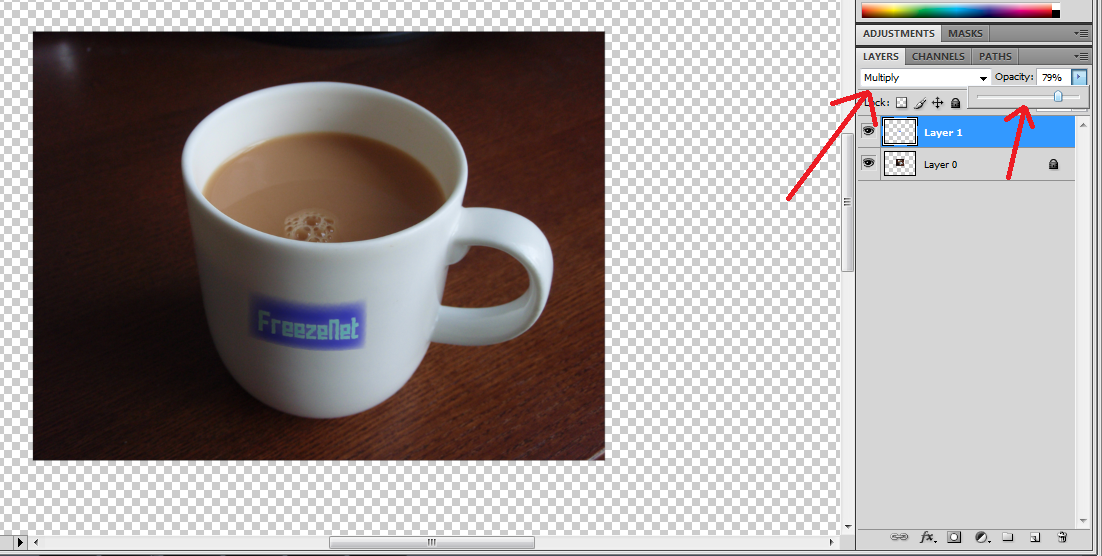 Now, in my case, what wound up working really well is the multiply opacity. After setting it to 79%, it almost made the logo look like it was actually on the cup the whole time. While some of the proportions could have been tweaked, that still looks pretty darn cool, eh?

Another thing we could use is colour corrections and curves to further add to the realism, but for our purposes, this is fairly sufficient for what we are after.

Now that you are armed with all this knowledge, you should be able to do a lot!