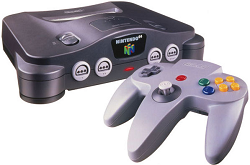 The Nintendo 64 was the first console that made 3D gaming the norm instead of the exception. Many gamers have had fond memories of playing on this console. In this guide, we show you how to play the N64 games you played on the physical console on your computer via Project 64.

In this guide, we will show you how to play these games on the Project 64 emulator. The Project 64 emulator seems to be one of the only remaining emulators that is actually still in (slow) development to this day. The unfortunate part about using this emulator is that some versions play some games well while other versions play different games accurately and different versions break the performance of different games. N64 emulation, to this day, has never been perfected, but a vast majority of the games that have been released are playable.

What you need are the most useful versions of Project 64. The main version you’ll probably want is the most up to date 1.7.x version you can find. I recommend this version because, as a general rule, this seems to play the most ROMs accurately. We cannot point you into the direction of where to get this version as this is a closed development version. Still, copies can be found floating around the web if you look. Just beware of fakes. Clean copies don’t set off virus scanners to my knowledge.

The next optimal version is version 1.6. Luckily, this can be found on the Project 64 downloads page. This emulator is great for emulating a few of those games that seem to play better on this version (there aren’t that many, but they can be found).

When 1.7.x and 1.6 doesn’t work, the third optimal version is version 2.0 which can also be found on the Project64 downloads page. This version, I found, broke more games than it fixed, but for games that ran slow, it’s possible that this version fixed those speed issues.

Shortly after the release of version 2.0, a version 2.1 was released. Version 2.1 contains adware. Not only that, there has been known cases where save files and save states have randomly become corrupted on users. On top of that, settings have not been optimized as the community has been forced to re-configure each individual game from scratch again to get games to work optimally. While this is the version currently being developed, for those three reasons, I wouldn’t recommend playing around with it (recommendation made weeks after it’s released).

For the other versions, these tend to be binaries and don’t require installing. So, just drag and drop the contents into their respective folders.

Next, create a ROMs directory next to your emulators directory and place all of your ROMs in that folder.

For the remainder of this guide, we’ll be using 1.7 to guide you through the remaining steps, but generally, the GUI typically remains the same.

Open up your emulator:

The first thing you need to do is locate your ROMs folder through the emulator. To do this, click on the “File” drop-down menu and click on “Choose Rom Directory…” 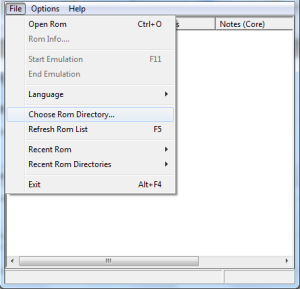 From there, browse to your ROM directory and choose the folder that contains your ROMs. When done, Project 64 will use what is known as “Good64” to detect the “Good” name of each ROM. This not only adds uniformity to the ROMs selection within the emulator, but is also used in tandem with an RDB file which contains notes for each ROM (i.e. High system requirement, missing lens flare, etc.). These notes are useful in knowing what you’ll be in for in the game that may or may not be introduced in the process of emulation. Once the ROMs are loaded in the emulator, you can use the list of ROMs for fast access purposes.

From here, the next thing you should do is select a game that has a certain style of play. Think of all those third person adventure/platform games (not shooters or first person shooters) or racing games (like those go-kart racing games). Pick that game and open it up. Once you have opened up the ROM, click on the Options drop-down menu and click on “Configure Controller Plugin…”

The “Range” slider on the bottom left controller denotes how far the control stick will go when you hold down the corresponding button on the keyboard. There are very few games that actually require this, but there is a racing game that makes play pretty much impossible when this is set to 100% and a top-down strategy game where the cursor moves too fast when this is also set at 100%. So, while rare that you’ll need this, it is possible that this is a necessary feature to tinker with for a small set of games.

The good part about Project 64 is the ability to save such a configuration and loading another configuration. So, when you are done configuring your controller for general games, save it as a certain file and exit the game.

Next, pick a first person shooter game and do the same thing for the shooter game – saving the configuration in a separate, yet easy to understand file like “shooter”. Not all shooters have the same configuration, so you may need to reconfigure the controller for a few specific games. When you are done with that, your controller set-up should be good for a large portion of games.

While you have a game loaded, click on the drop-down menu called “System”. You’ll note that this is where the save and load state features are actually located: 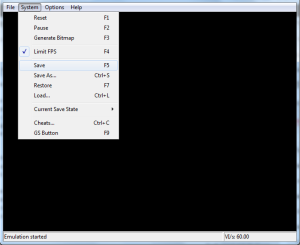 Personally, I think it’s more convenient to use the speed keys during game play (F5 for save and F7 for loading), but if you need to look up what those keys are or prefer the drop-down menu system, this is where to go for that.

Some games have emulation errors. The first place to look for help would be the built-in Game FAQ found under the “Help” drop-down menu and clicking on Game FAQ (when a game is not loaded in the emulator): 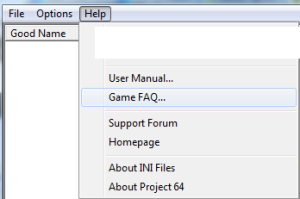 The help screen lists all the games with “known issues”. If your game is listed, there are known issues with this game. Some games simply have known issues because your system is slower (most modern computers don’t have these issues these days). If the question you have isn’t in there, you can simply go searching around online. Most issues have a workaround (if it exists), so sufficient digging typically produces a resolution for some of the known problems in the games.

If you need to mess around with the options (there are lots of emulation options), have the game with whatever problem you have loaded and click on the “Options” drop-down menu:

Some of the options you are looking for can be found in the “Configure Graphics Plugin…”. This option will load up whatever features that the graphics plug-in you have installed in question are available. This is one such screen:

Some digging and trial and error may be required in some plug-ins to try and resolve the issue in question.

Alternatively, the “Settings…” feature will show you the numerous settings put in place by the core for a particular ROM. In which case, you’ll probably wind up with a window something like this: 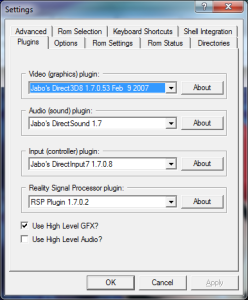 This will not only allow you to tweak certain features, but also allow you to choose different plug-ins. Project 64 will only detect plug-in’s found in the emulator’s plug-in directories (graphics plug-in in the GFX folder, etc.). Most of time, you won’t be needing to tweak certain features, but there is one first person shooter game that requires changing the counter factor number setting in the ROM settings tab in order to prevent the game from crashing when entering one of the levels.

In a vast majority of games, the various settings available will not need changing. In some cases, there are issues that have yet to be resolved (i.e. a clipping issue in a third person shooter game). In any event, tweaking settings are rarely needed, but it is nice to have an idea where these settings are located should the need arise. Most games are playable. Some games run without any flaws. Just keep that in mind while playing.

That is pretty much it!

My computer gets a blue screen of death (BSOD) when I start up/early into playing a game, what’s wrong?
This is a known issue for a lot of emulation fans. It seems to affect version 2.0 and later including version 2.3. Though the reasons could vary significantly from user to user, there are possible solutions for this. For Windows 7 users, one way to avoid the BSOD is to disable Aero when running the emulator. To do this, right click on the desktop and click “Personalize”. In the new window, scroll down through the themes to the bottom. One of these themes is Windows Basic. Use this theme to see if when running Project 64 to see if that stops the emulator from crashing the OS.

If that doesn’t work, try right clicking on the executable and click “Properties”. Next, click on the Compatibility tab. Tick “Run this program in compatibility mode for:” Select Windows XP (Service Pack 3).

If neither solution works, you may have to fall back on the often recommended advice of updating your drivers or updating Windows itself. For me, the first solution was what worked.