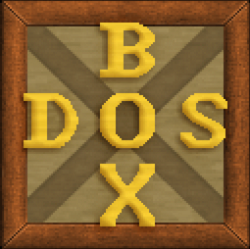 In a previous guide, we discussed how to play 16-bit DOS games on a modern computer. While that guide is able to get a number of games working, there are a few games that require the use of a CD Rom. This guide will show you how to emulate a CD Rom drive for games or application that require this.

Before we begin, this guide assumes that you have already done the steps involved in the 16 Bit DOS games guide and are simply running into the issue of the game or DOSBox prompting you to insert a CD. One such game that has this requirement is the original Warcraft II – Tides of Darkness (There is a Steam version that allows players to play the game without the need of emulating a 16 bit environment, but we are simply using this game as an example for other games that require a CD-Rom).

The first thing you want to do is take a look at the contents of the game and look at the name of the executable in question. In this case, it is “war2.exe”. Some games require you to create a folder that go by the same name as the main executable. So, we simply create a folder called “war2” (without quotation marks of course) in the directory where we want to later mount our drives (never mount the main root of your actual hard drive). Once we have created the folder for this game, we can simply move all of the contents of the game into this folder. You’ll probably have something like this: 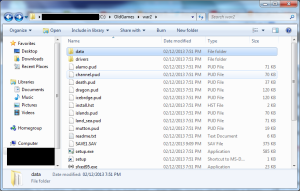 Once that is done, we can open up DOSBox: 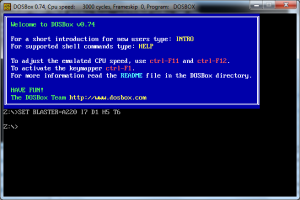 First, we want to mount the C drive as per usual: 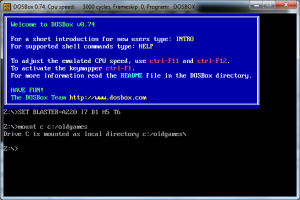 Now, we want to mount the CD-Rom drive. For that, we need to use the command “mount d c:/[directory to game here] -t cdrom”

The “-t cdrom” at the end tells DOSBox to map a CD Rom drive to the drive letter you selected (in this case, the “D” drive). Otherwise, the system simply operates as though that you have made another drive, not specifically a CD Rom drive which is what the game is looking for. So, in my case, I put in the directory string, the CD Rom label and hit enter to see this: 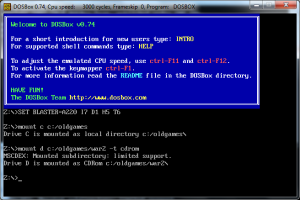 Cool! Our CD Rom and our C drive have both been successfully mounted! Now, let’s browse to our game. In this case, what works for me, I just switch to the emulated c drive: 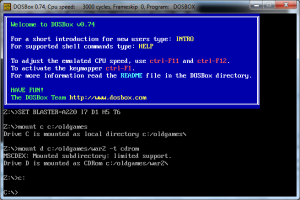 Now, I just browse to the directory for me game: 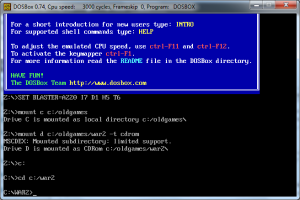 Finally, I type in the name of the executable (while adding “.exe” also works, it’s unnecessary): 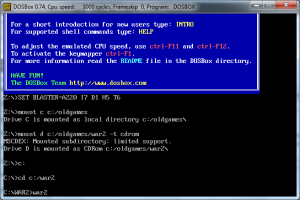 Hit enter. Not only does the game start, but it behaves as if the CD is in as well (critical for this particular game). Congratulations! You have a working game!

We should note that this may not always be the be-all, end-all solution for 16-bit games that require a CD-Rom, but this should, at the very least, show you a few critical steps needed to at least allow you to tinker with the game in an effort to get it to work. In this case, our game works fine simply by following these steps. We don’t know if these steps alone work for every game, though. Some manufacturers may provide you with detailed instructions on how to get the game to function properly in DOSBox (as is the case with the free to download Elder Scrolls 2 game which details specifically what to set in terms of cycle speeds, etc. right out of the box for smooth operation).

We hope this helps you get some of those harder to emulate games to work.