Headings are mercifully a very straight forward thing to code in HTML. They consist of no more than opening and closing tags like this: <h1>.

So, to test all of these, I put together this bit of HTML code:

As you can see, we have a heading corresponding to the heading tag in the body tags. The end result of this little piece of code is this: 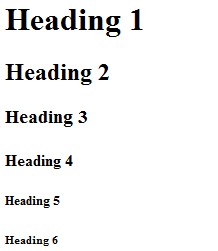 As you can see, the larger the number, the smaller the text becomes. H1 produces the largest text out of all of the HTML tags. H6 produces the smallest. You can use any of these headings as many times as you like, the different headings are just there so you have a choice of how big or how small you want any particular heading to be as far as straight HTML is concerned. This can greatly assist in formatting your webpage.

That’s pretty much all there is to HTML headings!

Some characters such as the angle brackets won’t show up when you try and type them in to an HTML document. So, if you simply typed in “<” into your HTML document, it will simply not show up when you test it in any browser. If, for whatever reason, you want to actually put an angle bracket in normal text, you can simply use an escape tag which is a set of characters used by numerous browsers to interpret certain characters, bi-passing any conflicts between the browser trying to determine if a tag is there or if it’s just plain text.

I’ve produced the following code to show you how this works and what other escape tags look like:

You can kind of see what each one stands for: “Amp” for ampersand, “quot” for quotation, and “copy” for the copyright symbol. This is one of the only exceptions where angle brackets are not used to create an HTML tag. Instead, escape tags must have an ampersand at the beginning and a semi-colon at the end. In the middle is whatever the character is being used. You can also use ASCII number values, but I found that using these escape tags are simply much easier to remember. The end result for the above code is this:

That is it for escape tags! Pretty easy!

In the next part of our tutorial, we’re going to discuss heading rules, code comments, and comment on some practical uses for HTML.