In the previous guide, we discussed how to insert and modify text. We also covered creating boxes. We even discussed a little bit about pictures while we were at it.

All this, of course, is very basic. While it is nice to know, the purpose of slide shows is to tease content out piece by piece. So, in this guide, we talk about how to create animations. Additionally, we also delve a little into creating additional slides as well as moving them.

It’s easy to think that if one were to make, say, bullet points appear, that all one needs to do is copy everything over the slides, then add the points one at a time in each subsequent slide. That would actually be an inefficient way of handling things because Impress offers a selection of animations that can be customized for various objects. This is, of course, a much more highly recommended way of handling things. 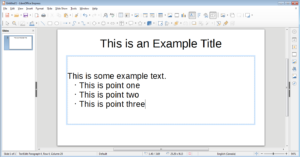 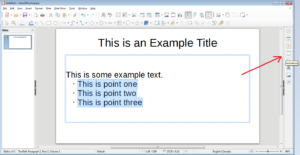 Next, I’m going to click on the “Animations” button (highlighted in the screenshot) on the right hand side of the window. 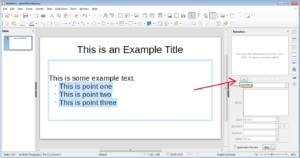 Next, I’m going to click on the plus sign (“Add Effect”) button to add an animation (highlighted in screenshot). 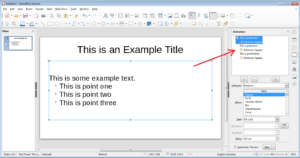 By default, each bullet point is going to appear all at once. We want each point to appear one at a time. So, let’s click on each point starting with the second. 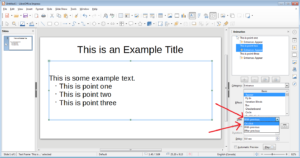 Now, you’ll notice that the second point is no longer set to “On Click”. Instead, it’s simply set to “With Previous”. Since there is no real animations set in place, everything will just appear all at once. Let’s set each point to “On Click”.

When you’ve done all that, chances are, by this point in time, you’ll want to preview your slide show to see if what you did works. To preview it, simply click on “Slide Show” in the top menu bar and then click on “Start from First Slide”. Alternatively, you can also press F5 on your keyboard to initiate the slide.

while we are set with animations, each one is, well a case of “click to make appear”. What about, say, fading animations in? Impress offers a range of animation. We’ve only used the default appear animation. 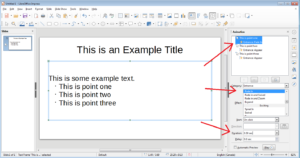 First, let’s click on the first point we want to animate. Next, we’re going to scroll through the animations (second element highlighted in screen shot) and find “Fade In”. Finally, we’re going to determine how long the animation should take. 2 seconds and 1 second may not sound like much, but when you are waiting for a single bullet point, that can actually make your audience feel like it’s taking a long time. So, I’m going to choose a half a second. That’s more than enough to show that you are trying to make an effect.

With the rest, I can set the bullet points to the same or I can choose other effects along the way. Some animations may demand that you give it a second or two to animate, but a lot of them only need that simple half a second to prove effective. After you are done, preview your slide show and use your arrow keys to see if it works.

On a side note, if you use a half a second fade in, you can make small portions of your presentation appear consecutively instead of having to click. Simply use the “With Previous” option instead of the On Click option we’ve been using. You can make sections fade in with a single click after. There is a lot of different ways you can produce a set of animations, so the flexibility is there. 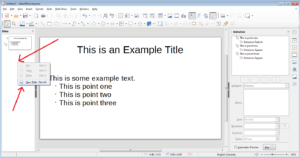 If you look on the left hand side of the window, you’ll see where slides are located. Simply right click in the empty space below your first slide and click “New Slide”. 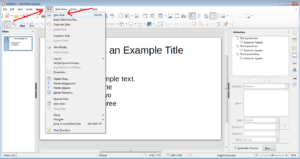 while that method is practical when you only have one slide, as your show gets bigger, you’ll probably want another way of creating a new slide. So, another way of doing so is to click on “Slide” in the top menu bar and click on “New Slide” (naturally, the “CTRL+M” speed key will also work). Also, there is a new slide button in the buttons menu as well.

When you are done, you might be wondering how to animate a transition between slides. That is also very simple. First, click on the slide you want to add a transition to (in my case, I’m selecting the second slide). 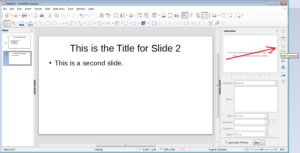 On the right hand side of the screen, you’ll want to click on the “Slide Transition” button (highlighted in the screenshot).

From there, I can just select any animation transition I want. It’s worth pointing out that just because the transition is available doesn’t necessarily mean you should use it. If you are creating a slide show, under most circumstances, you probably don’t want to use absolutely every single one in the library throughout the whole show. Sometimes, a simple fade is more than sufficient. Still, you can always throw in the odd different transition for a little variety. Also note that there is a transition time to animate. I’m going to select one second because I’m keeping things simple.

Shockingly, you can even add sound to your transitions as well. Impress even has a whole library of sounds for you to use even. If you are happy, feel free to preview the slide show to make sure you are happy.

Impress will offer a preview of the transition as you select it, but it doesn’t hurt to see how one slide animates into another.

Let’s say that you somehow managed to put a slide in the wrong position. This is very easily corrected in Impress. First, select the slide you want to move. 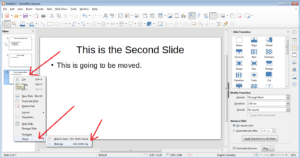 Next, right click on it, then hover your mouse over “Move”. From there, you can either move to the top or bottom or just move up or down one position. Options will become available depending on the current position of the slide. For instance, if it’s at the bottom, you can’t move it down any further, so those options will become hidden. 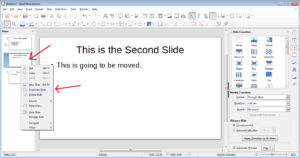 Next, right click on it, then click on “Duplicate Slide”. Note that the new slide will always appear below the slide you just duplicated. From there, you can move, edit, or do whatever you want with it.

Congratulations! You now know how to create simple animations. Creating, animating, and managing slides is also now in your toolkit!