In this third part of our tutorial, we go into how to move and manipulate objects.

In the previous part of our guide, we discussed how to move around in the 3D view port. While we can see things at this point, we aren’t really able to do much beyond that. So, in this part of our Blender tutorial, we look at how we can move and manipulate objects. 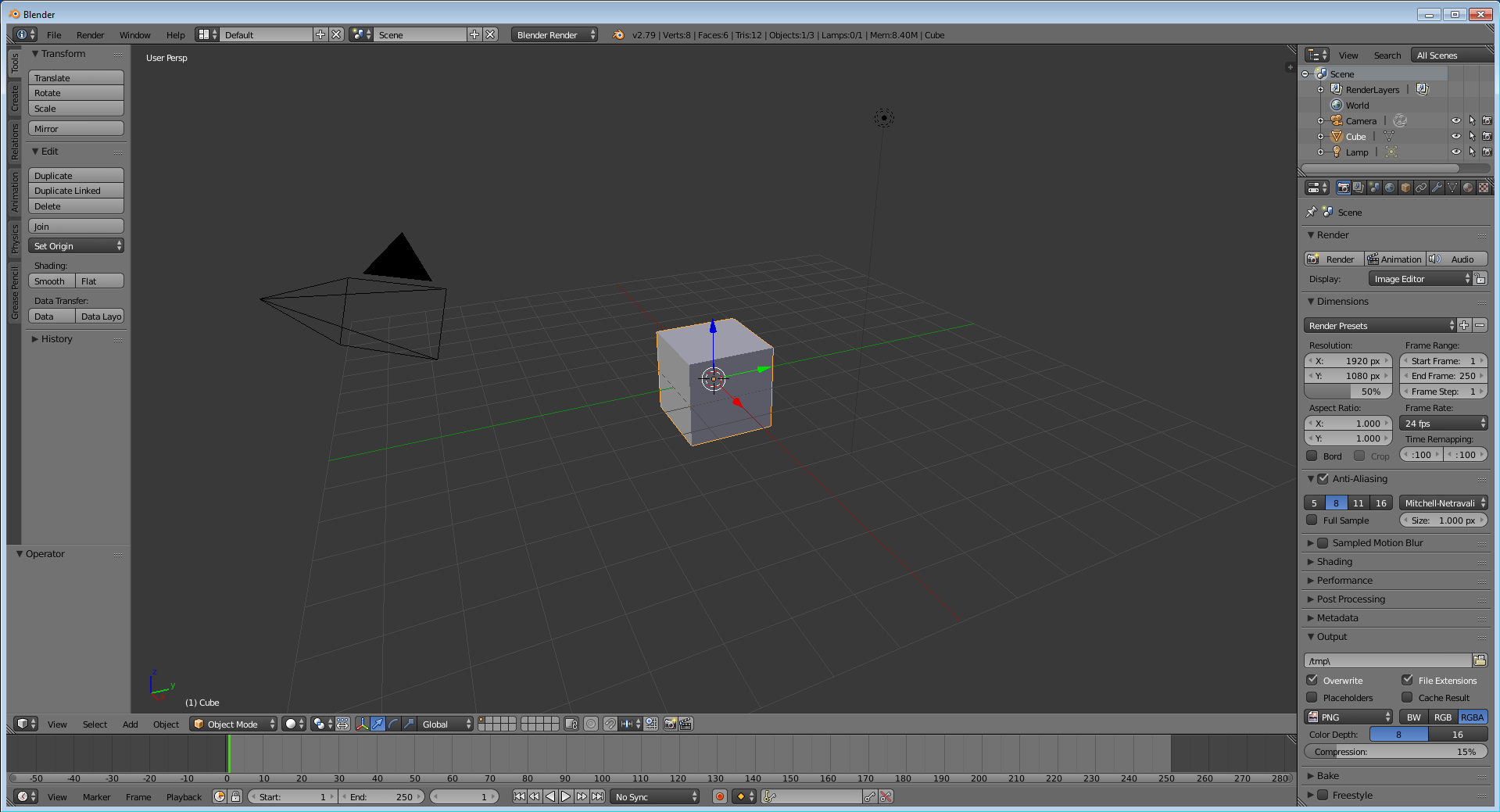 In our basic 3D view port, we have our default cube. Let’s say we want to move it. If we hover our cursor over our cube, we can tap “G” for “grab”. Once we “g”rab our object, we can move the cube around the scene. When we are done moving it around, simply left click again to stop moving it around. 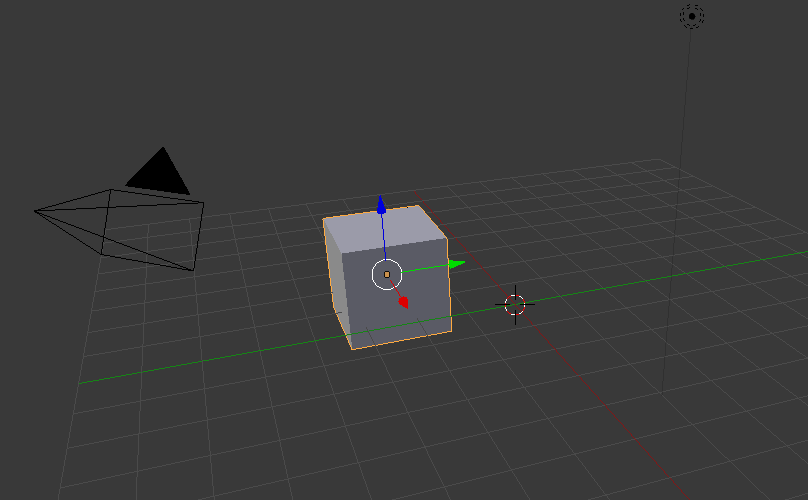 Let’s say where we put it is not what we want. What if we want to go back to what we had before? That’s very easy. Like most programs out there, we can hold down “CTRL” and press “Z” to undo our move. In this case, it’ll bring our cube back to the centre of the scene.

For those who might remember, think back to grade school math. Remember when you were shown graphs? You might remember how there is the “X” axis and the “Y” axis. One goes up and down while the other goes left and right. 3D operates in a very similar manner. A big difference is that 3D also has a “Z” axis. Combined, the form your up/down, left/right, and forward/backward movements. Conveniently enough, they also represent a speed key as well.

So, like before, hover your mouse over the cube and “g”rab it. When you can see that you are moving the cube by moving your mouse, tap “Z”. This will constrain your movements so you are only moving on the “Z” axis:

You’ll notice that a blue line will appear while you are moving your cube. This shows you that you are now locking your movements to the “Z” axis. 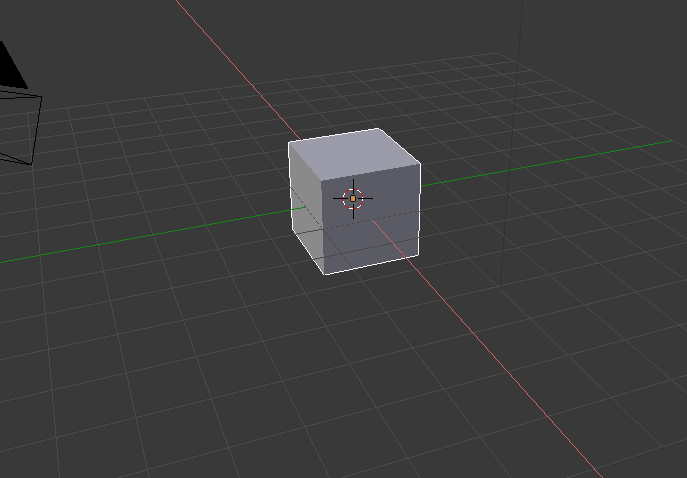 You’ll notice that a faint red line appears. This indicates that you are now constraining your movements to the “X” axis.

Finally, let’s try the “Y” axis. “G”rab the cube and tap “Y” before moving your mouse around:

Now, you’ll notice a faint green line. This indicates that you are constraining your movements to the “Y” axis.

Let’s say you are not a huge fan of moving objects based on those three speed keys. An alternative way of moving things around is through the 3D Manipulator Widget. By default, it is on. What it is is that red, blue, and green arrow thing in the middle of your cube. Conveniently enough, if you click and drag any of those arrows, you can move your object on the axis of your choice just like “g”rabbing the object and tapping the axis speed key.

There are pro’s and con’s to this kind of movement. A big pro is that it is much more intuitive to use. Just click and drag the object in the direction indicated by the arrow. A con, however, is that those arrows can overlap with other things you are editing. So, ideally, you’ll want to use the speed keys more as you get into more complex stuff. Conveniently enough, there is even a way to hide this widget. Just click on the widget button highlighted below to hide or unhide it:

On a final note, these movements apply to every object in your 3D view port. You can move your lights in this manner, camera’s, and even new objects you are moving into your scene. Feel free to play around with this if you like.

Scaling an Object (Changing Its Size)

When you are happy with your size, simply left click to stop your movements.

Of course, scaling isn’t just limited to just regular size adjustments. You can also adjust the size of your object on a particular axis. It’s just like moving on an axis, but in this case, you are scaling on a fixed axis. Simply tap “s”cale and tap an axis to see what I mean. Below, I am scaling on the “Y” axis:

A third way you can “s”cale an object is to constrain your movements to two axis. Think about which axis you want to lock down first. Next, “s”cale your cube. After that, hold down “CTRL” and “Shift” and tap the axis you want to lock down. After that, move your mouse accordingly and you’ll see your “s”caling occurring on the two remaining axis. In the below example, I am scaling my cube on all but the “Z” axis:

That’s simple “s”caling in a nutshell. It nicely builds on what we learned in the movements, enabling us to better manipulate objects. Great things to know if you are getting into modelling (which generally forms the basis for a whole lot of other uses for Blender).

The final main movement is “r”otate. To “r”otate an object, simply have it selected, then hit “r” on your keyboard. Much like scaling, a dotted line and a left/right cursor will appear. 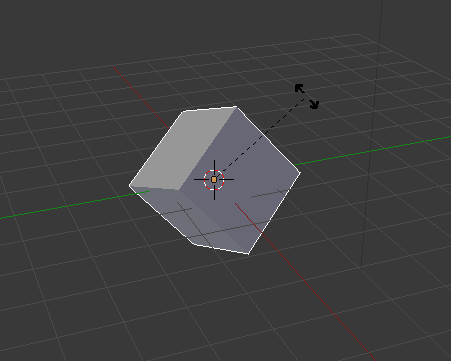 Simply move your mouse until you have the desired rotation, then left click to stop the rotation.

If you wish to rotate on a particular axis, “r”otate your object, then type the axis you want just like what we did with scaling and grabbing. In the below example, I am rotating the cube on the “X” axis: 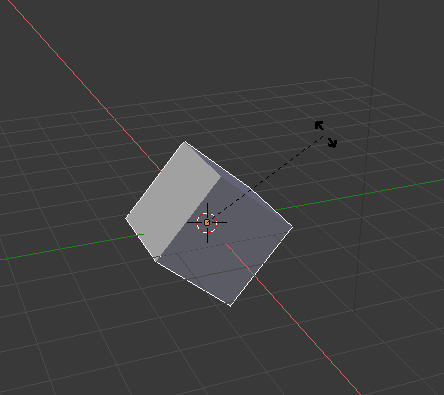 Now, let’s say you want to rotate your cube by a specific amount. This, too, is actually quite straight forward. Following up with the previous example, let’s say I want to rotate my cube by exactly 45 degrees on the “X” axis. First, make sure the cube is selected. Next, “r”otate. After that, hit “x” to tell Blender to rotate on the x axis. Finally, type in “45”. You’ll see your 45 degrees entered near the bottom left of the screen. Left click to finish the rotation.

This allows for much more precise movements.

Now, let’s say you want to use a widget for your rotational needs. This can be done as well. Along the bottom of your screen, you’ll see three buttons that you can toggle your widget. The one with the arrows is for moving your object. The one with the squares allows for scaling. In this case, we want the button with the curved line. Simply click on that and you’ll see your widget change to have rings around it. From there, simply click on the axis ring you want to modify and click and drag to the desired rotation:

Again, this is a user preference thing. Still, you might find it more convenient to use speed keys as you get into more complex projects later on. Still, if you want to know where this is, it is definitely at the ready when you need it.

That’s it! That is your basic movements and object manipulation controls in Blender!

For those of you who are practising and don’t want to read through paragraphs of content to get to the keyboard shortcuts, here is a list of everything we covered in this part: