In this guide, we share our initial thoughts on Illustrator. We discuss things like raster vs. vector art as well as some of things.

Adobe Illustrator, for some, is that piece of software some people have heard of, but for the most part, a lot of people don’t really pay much attention to. Adobe Photoshop is what gets a lot of attention as it is quite famous for image manipulation. However, Illustrator is also a very useful tool for creating things as well. So, let’s get right into it.

A question for you might be, “Why Illustrator anyway?” The reason why 2D digital artists should consider using Illustrator largely stems from a debate between raster images and vector images.

Raster images is the Photoshop side of the debate. Raster images divides all images into a grid of square dots. These square dots are known as, well, dots. From the perspective of a monitor, this makes sense. After all, screens are largely just tiny pixels in a giant grid. Why not have images that follow along with the same logic?

The thing is, if you’ve ever zoomed into a raster image, sooner or later, you are going to see those dots. It’s essentially a lossy format.

This is where vector images come in. Vector images looks at an image very differently. What it does is take certain points of data on a screen, then automatically draw whatever it is that it’s supposed to draw between those two points. Why that is significant is because no matter how much you zoom into that image, you’ll never start to see blocks of pixels after a while. In short, it’s a lossless format.

If this doesn’t really make sense, let’s take a look at this image below: 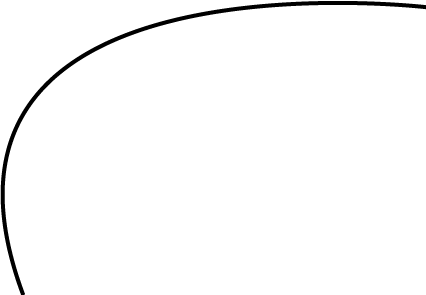 Yeah, that’s not so pretty, is it? We can see the computer struggling to utilize anti-aliasing and the jaggedness is starting to get a bit much. You might think, “Well, no big deal. Just make the image higher quality!” We can increase the DPI (Dots Per Inch) and keep increasing the file size. Unfortunately, sooner or later, we’ll continue to get the same problem.

Now, let’s look at the image at the same zoom level as a vector:

Wow! What a difference! All that jaggedness went away. All that is left is just a nice smooth curved line. We didn’t have to “increase the quality” and our file-size hasn’t changed. Just a much cleaner line. The thing is, we can keep going to greater and greater extremes of zooming and it won’t matter. Your image is still going to look clean.

Your next thought might be, “Well, why doesn’t the world simply move to vector images instead of raster images?” The problem is that a lot of vector based images are proprietary. Secondly, it can require more computer processing to render the image out. So, while vector images may not be a thing for a very long time on the web, vector image programs can still be a powerful tool creating things like logo’s, covers, and other simple images.

If someone (i.e. a client) sees a small logo and says, “Hey! That’s an amazing image, but do you have a higher quality version of it?” You can reply, “How big do you want it?” That’s the power of a vector-based art program.

< You are currently at the first part! | Index | Stroke, Fill, and an Intro to the Pen Tool >