The Sega Dreamcast was the last console Sega release before the company restructured into a third party software developer. While this console suffered from an early exit, some of the games released on this console was considered high quality by a number of gamers. In this guide, we show you how to play Dreamcast games on the emulator NullDC.

The first thing we need here is the emulator. Unfortunately, like Project 64, this emulator suffers from having one emulator fixing some games and breaking others while another version seems to fix some games and break others. From my testing, it’s a good idea to have two versions: the latest alpha version and a stable release of 1.0.4. You might come across some references to NullDC 1.6, but that is actually referring to version 1.0.0, Beta 1.6. So, it’s a few versions behind.

So, we’ll start with the latest Alpha build. To get that, we can first simply go to the NullDC Google code page. The page itself says that you may need to get DirectX9. Since I’ve been doing extensive testing of different emulators, I had already obtained DirectX9. So, if you don’t have Direct X9, then it might be a good idea to download Direct X9 through the link they provide (which goes to Microsoft’s webpage). If you don’t, I can see it being possible that the emulator would complain about missing DLL files on start-up. I, unfortunately, wouldn’t know what the error would be without DirectX9, but it might be similar to what you’d see when attempting to run the Snes9x emulator without DirectX9. If you have Direct X9 and you are still getting a missing DLL error, get the C++ runtimes also mentioned on the page and install it.

After that is sorted and you’re back on the NullDC page, head over to the downloads page and download the nullDC_104_r136.7z version and not the version with NAOMI.

Now, we need to obtain the BIOS. I can’t explain where you can get it, but I will say that the proper file size for the dc_boot.bin is about 2MB big and the dc_flash.bin is about 128kb big. When you have obtained these files, make sure they go by that name and put them in the data folder of the emulator.

When done, we’ll next need to obtain an earlier version of NullDC. The only one I found was located here. Create a folder after you finish downloading it for the other version of the emulator and extract the contents of the archive into the new folder.

Finally, create a third folder for your game CD images. Put all of you Sega Dreamcast CD image game files in that folder.

Now, the first thing we are going to do is load up a game in the latest alpha release. So, go into the alpha version of the emulator and double-click on the “nullDC_Win32_Release-NoTrace.exe” file. 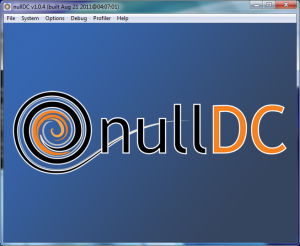 Now, we need to have some controls. In this emulator, names are a bit different then your standard emulator. So, for the controls, we need to click on the “Options” drop-down menu, then hover the mouse over “Maple”, then “Port A”, and then click on “Config keys for Player 1”: 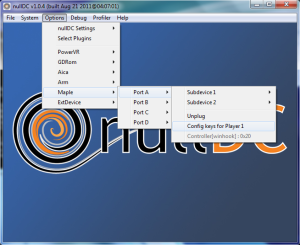 To adjust the keys, follow the instructions along the bottom of the window and click OK when done.

Now, we need to boot a game. To do that, we need to click on the “File” drop-down menu and click “Normal Boot” (there’s no shortage of users who clicked on two options below probably because most other programs in general use the word “Open” or “Load” for general files, but I digress). In the new window, click the button with three dots to browse to your games folder. Highlight the game you want to play and click “Open”. When you go back to the screen, simply click on the OK button to load the game.

(You’ll be asked for a date and time on the first run. This seems to be a completely optional feature.)

If you picked a game that uses a memory card (and a compatible game no less), it should load nicely without any issues. If it does load with issues, try another game until you find one that does work. Create a single new game file to ensure that the memory card actually works. Once done, click on the “System” drop-down menu and click “Stop” (if the menu bar disappears, try clicking on the screen or pressing alt to get it back). Then, click on the “File” drop-down menu and click “exit” to get out of the emulator.

At this point in time, you should have a memory card file in your alpha NullDC folder called “vmu_data_port01.bin”. You can copy and save this file into a different folder for later use in the event that you run out of space on the current VMU memory card.

Now, we are going to employ an easy way of fixing the memory card issue (apparently, a major problem with a lot of new users) in the Stable release version of NullDC. Copy the “vmu_data_port01.bin” file, then go into the folder for the stable release version and just paste it there (not in the data or plugin’s folder, just in the main folder).

Open up the stable release version of NullDC by, again, opening up “nullDC_Win32_Release-NoTrace.exe”. Configure the controls for this version like you did in the Alpha version so you have controls you are comfortable with in both versions.

At this point in time, you should have two fully functional versions of the emulator: the latest alpha release of NullDC and a stable release. I recommend using the Stable release as your main emulator. If a game doesn’t work right, try the Alpha release to see if it fixes the issue. If neither work, then it’s probably not a compatible game with NullDC.

At this point in time, we should point out that NullDC does not support save/load states. So, saving to the memory card will be as good as it gets in terms of saving the game.