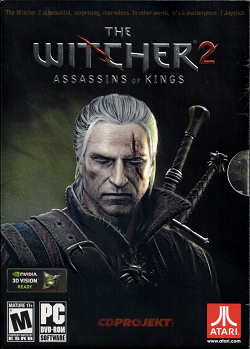 This is the 17th instalment of our first impression video series. For this month’s game, we are playing The Witcher 2: Assassins of Kings for the first time.

Welcome to the 17th instalment of our first impression video series. Today, we are playing the RPG game, The Witcher 2: Assassins of Kings. You can check out the video directly on YouTube or in the embed below:

This is the second time we’ve played a game from this series. As a result of this, we are learning more and more about this series as a whole. What do you think? Did you like the first or second game better? Are you one of those players that only played the 3rd game? If so, what did you think when you saw this video?

One side note: Yes, I didn’t remember the mapping system of the first game correctly. It actually features way points in the mini-map. Between recording the first game and the second game, there was quite a gap of time in between. So, that likely was the reason for that. Still, to my knowledge, every other observation in the video is quite accurate.