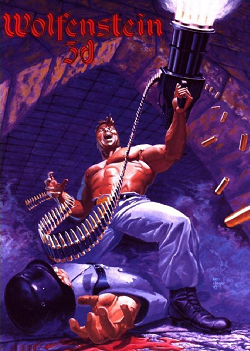 In this review, we check out what a number of people consider to be a classic first person shooter game, Wolfenstein 3D. We find out how this game plays today.

This game was released in 1992 and would spark countless ports after. One such port was the SNES version in 1994 which we previously reviewed. Since we’ve already pretty much offered a detailed review previously, we’ll focus on the specific differences between this version and the SNES version.

One of the most talked about elements of the SNES version was the apparent censorship that went on in this game. Things like the famed German mustaches were removed. Swastika’s were also removed as well as a vast majority of all German references from both the textures and the storyline. Having now played the original, I think I can say that the censorship, while present in the SNES version, was more of a superficial thing. The original version still had the chemical warfare references. There were still the references of using a zombie army (as well as the references to evil scientists and generals heading up the operation). I think that this is only an issue from a purist perspective in that you don’t get 100% of the Wolfenstein experience from the SNES version. The gameplay is intact and you still get a good Wolfenstein 3D experience with the SNES version. I will say this, though: if you want the full authentic Wolfenstein experience as originally intended, then I would say play the DOS version instead. If you are curious to see how the game fared in being ported to the SNES, I don’t think there is any harm in trying the SNES version. The differences so far as censorship is concerned is quite minor in my opinion.

Having said that, there are other notable differences between the SNES and original version. In the SNES version, it was possible to view a map of the level as you explored it. The map would be drawn in as you explored. This really helped with navigation, finding secrets, and simply not getting lost in the labyrinths found on the many floors of this game. If this was available in the DOS version, I didn’t find it. This meant that it was harder to figure out where you were on some levels and made me refer to online sources for maps on the occasional level. Some maps had distinctive enough features that allowed me to navigate without the help of a map, but other floors almost made having a map next to me a necessity (episode 6, level 7 would be a good example of this).

Another difference I found between this game and the SNES version is the weapon system. In the SNES version, you could get rocket launchers and another weapon that uses entirely different ammo supplies. In the DOS version, you have 4 weapons: the knife, the pistol, the sub-machine gun, and the chaingun. With the exception, of course, to the knife, all of your weapons share the exact same ammo supply. To add to this, the game caps out at 99 bullets. So, preservation of ammo is even more crucial in this game than the SNES counterpart. I found the ammo cap a bit low for my taste because it is way too easy to run out of ammo. Most ammo pickups are 5 bullets each and guards only drop one clip on death. 5 bullets almost seems to be a minimum to make sure that a particular enemy is dead (sometimes, you can get away with 4, but if you aren’t super experienced with the aiming system of this game, chances are, the 5th shot will ensure that any miss is accounted for).

While those are deficits this version has over the SNES version, there are definitely strengths the DOS version has over SNES. The big one for me is enemy behavior. In the SNES version, it was pretty much impossible to sneak up on an enemy. Even if the enemy is facing the other direction, 99% of the time, the enemy will see you and react accordingly. In the DOS version, the ability to sneak up behind a guard was actually realistically possible. In fact, it gave this game a sense of realism that just didn’t exist in the SNES version. If one guard sees you, the guard is able to alert other guards in the area. If you shoot a guard in the back, you can easily take down that guard in 2 shots (sometimes even 1).

One thing to note about this game is the difficulty settings. Supposedly, the easiest difficulty (“Daddy, can I play?”) is for young and non-gamers. The second easiest setting (“Please don’t hurt me”) is for people who have some experience playing games. In the first two episodes, I did complete all the levels on Please don’t hurt me, but every episode after that, I fell back to the easiest setting. On the second easiest setting, it’s possible that an enemy can shoot you once and you lose roughly 50% of your health. Since zombies can hold two pistols, you can enter a T-section, shoot one zombie, but a zombie from the other side of the intersection already let loose two shots – effectively killing you instantly. So, if you’ve come from playing more modern games that can generally be seen as easier, then I would recommend the easiest setting simply because the game starts getting annoying with the instant deaths. The easiest setting, at the very least, is bearable, though can be a challenge still with the last episode still. I like to think that I’m not a terrible FPS player, but this game did make me feel like I sucked at it even though I’ve played many FPS games on harder settings with success (i.e. completing the first episode of Duke Nukem 3D on Damn I’m Good).

Another thing to add is that I liked the rating screen at the beginning (rated PC-13, Profound Carnage). I thought that was hilarious.

Graphically, the DOS version was vastly superior to the SNES version. You not only could tell plants and guards apart in this game, but you could also see well into the distance without too many issues. Not only this, but there was a lot more wall textures than the SNES (though it is notable that most of the unique textures are buried on the final episode or two, sadly). I also think there were more props found in the game as well. Essentially, in terms of graphical quality, the SNES version gets spanked by the DOS version. While this game is more barren compared to games like Ultima Underworld II, it still holds up nicely in terms of smoothness of gameplay.

Audio is an interesting thing to compare between the two games. Since the SNES version came out 2 years later, it wasn’t quite as impressive to have speech samples as it was for the DOS version. So, because of the year, I think this game had great sound effects and it was great to hear speech samples – especially speech samples that were so crisp for the time. The music, on the other hand wasn’t exactly impressive. The best music in the game in the SNES version was brought to the forefront within the first few levels (namely,the track Funk You). In the DOS version, this track was buried in a secret level in the last episode. Since I missed the secret levels in the playthrough, I missed it completely. As a result, I have to rate the music based on what I heard in-game. There was some somewhat interesting tracks after you complete a few episodes, but even the better tracks was largely forgettable. The music in the first few episodes gets dry and boring after a while – especially after you’ve gone through the same corridor for the 5th time trying to find a key. So, sound effects and voice samples great, music, not that impressive.

Overall, I can definitely see why people consider this game a classic FPS game. While there are strengths and weaknesses over the SNES version, it’s still definitely a game worth playing. The mapping system was pretty much non-existent and the ammo cap was definitely too low, but enemy behavior, the pure Wolfenstein 3D experience in terms of censorship, and the superior graphics really gives the DOS version an edge. The game difficulty might be high for the casual gamer, but it is approachable if you can handle the humility of playing on the easiest setting. Definitely a recommended game.