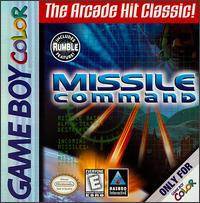 In this review, we prepare to defend ourselves in another version of the action survival game Missile Command. This time, we are giving the Game Boy version a try.

This game was released in 1995 and would be one of the last official ports for the game. Earlier, we reviewed the Atari 5200 version and gave the game a positive review.

This game is a lot like previous versions of this game. You have two missile bases with limited ammunition for each. Each missile battery is located on opposite sides of the screen. While both aim at a single target, strategy dictates that the missile battery closest to the target should be fired if possible. Both A and B fires a particular missile battery. you use the D-pad to move the cursor around.

You have a set of “cities” along the bottom. As long as you have one city that survives the bombing, you move on to the next round. If none of the cities survive, then you are hoping that you’ve earned enough points to earn a bonus city at the end of the round (a more common occurrence in later levels). Otherwise, it’s game over.

The standard lines heading towards you represents simple missiles. Occasional planes do fly over dropping a missile along the way. Destroy the plane before it happens and you avoid having to target yet another missile. There are also what appears to be smart bombs that evade your missile blasts. It can be difficult, but not impossible to destroy these. There are also satellites that fly by dropping missiles on you as well.

As you progress to each level, the missiles and movements of enemies increase in speed. While this works against you, the bonus points you can get for difficulty also increases. So, at first, you could go a couple of rounds without getting bonus cities. Eventually, it becomes more than possible to earn a bonus city in each round, making survival much easier in the face of the increasingly difficult task of surviving.

Also worth noting is that the missiles you fire creates a temporary destructive cloud. This enables you to create a sort of protective wall, destroying many missiles in the process without firing additional shots. So, strategies do come into play in this game. If a missile battery is destroyed, then you better hope you survive the round anyway in order to get it back. Each missile battery has 15 shots. If they run out, that’s it. You have to survive the round without it before you can reload.

On the surface, this isn’t a bad game. It takes an old classic and attempts to bring it into a comparatively modern era. The downside is the the fact that the only thing this game brings to the table is simply naming the cities you are defending. Beyond that, there’s little in the way of innovation here. By 1995, there were a lot of Game Boy games on the market that offer so much more in an experience. This simply doesn’t compete against other games on this system – even those released in the previous 2 or 3 years. As a result, this game does have a certain novelty to it at first, but once the novelty wears off, there’s little value in replaying the game.

Graphically speaking, it was nice to see that different levels have altered graphics. This was what made gameplay of previous games a tad repetitive because only the color pallets changed. Actual art that represents the cities like Sydney, Rome, or Moscow worked quite well. The flickering of the blasts made the blast radius a bit hard to see, unfortunately. The icons and even the game over screen were pretty decent. So, some strengths and weaknesses here.

The music was decent, though a bit limited. The thing is, there is little in the way of a game here, so there was music where it counted. The limited library had more to do with the limited gameplay more than the quality of the sounds. The sound effects were nicely done in my view.

Generally speaking, if you are hoping to replay a classic game like Missile Command on a newer system, this game will fit the bill. Unfortunately, the arcade style means that gameplay is rather limited and seemingly inferior to the experience you might get from other Game Boy games by this time. The graphics had their hits with the background images and misses with the flickering missile blasts, but it could have been worse. The music was a bit limit, but the fact that there was not much too this game may have been to blame rather than the quality of music itself. There was music where it counted. The sound effects were quite decent. So, this game may be a good distraction for an hour or so, but once the novelty of the concept wears off, there’s little left.