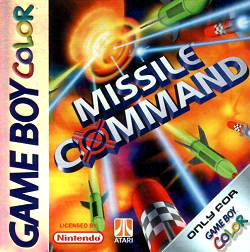 In this review, we go on the defensive in the Game Boy Color game Missile Command. We find out how well this survival game plays.

This game was released in 1999. We have some familiarity with this game. We previously reviewed the Atari 2600 version. That game earned a great score. We also reviewed the Atari 5200 version. That version too earned a great score. We even gave the regular Game Boy version a try. The game wound up being fairly outdated, but still scored alright. So, we thought we’d give the Game Boy Color version a try.

Since this game is a lot like the Atari 5200 version, we thought we’d focus this review on the differences.

One big difference is the fact that the missile batteries have numbers on them. This makes it easier to see how much of the stockpile you have left compared to just small pictures of missiles.

This game also takes after the regular Game Boy version in that you have names to the cities you are defending. This does add a sense of reality to the gameplay.

This version also has two player mode. While that may be exciting at first, the two player mode is simply you and whoever you are playing with taking turns with each level. On the plus side, both scores are displayed at all times.

Beyond that, gameplay is largely the same.

One aspect of this game is the simplicity. That is both the strength and weakness of this game. The strength is that it is very easy to learn. The learning curve is very shallow to non-existent. The reason it is a weakness is because there is not much there to excite the player once the initial novelty wears off. You can easily get your fill over the course of an afternoon with plenty of time to spare after.

One positive to this game is that so much of the gameplay from the original remains intact. For older players who are hoping for a kick of nostalgia, this game is definitely for them. The difficulty curve and scoring system can draw a few new gamers as well, but it’s likely a trickle though.

What would have been nice to see is a much more progressive approach to this game. One possibility is to allow for special attacks. Maybe even have a built-in store system so that special rockets can be bought. An example might be heat seeking missiles or fast rockets or even a smart bomb to clear out the sky in a flash. While this might not be the only idea to bring the game into the late 90s to early 2000’s, an improvement would likely be a positive approach to keep the game relevant to newer gamers.

Generally speaking, the simplicity is both a positive and negative. It keeps the old style play intact for those who want an old favorite on a newer device. This will do a great job in retaining old gamers, but the lack of progression makes it hard for newer players to justify playing this game. The length also leaves a bit to be desired. So, an OK game, but nothing big.

The graphics are definitely stepped up with the increase in hardware capabilities. The game features full backgrounds and the different sprites have received a facelift. Probably the biggest improvement is the cutscenes between cities. While there isn’t much to them, it’s better than nothing. So, a decent job all around.

Overall, this game goes to great pains to keep the old style of play intact – to a fault. The shortness and lack of progression is what holds this game back. While more than accessible to older gamers, newer gamers may not see much of a draw to this one. The graphical facelift on everything is a great thing to see and the cutscenes do add to the quality. Unfortunately, the audio isn’t exactly magical. An overall OK game, but nothing too surprising.