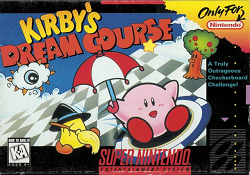 In this review, we check out a sport style game called Kirby’s Dream Course. We found if this entry in the Kirby series is a good one to play or not.

This particular game was released in 1995. It is one of the earlier entries in the Kirby series.

This game is vastly different from previous entries in the series. Unlike games like Kirby’s Adventure and Kirby’s Dream Land, this game is not really an adventure game even though it does contain subtle adventure elements. This game seems to be primarily based on the sport of golf. So, if you ever wondered what would happen if there was a Kirby style golf game, you get Kirby’s Dream Course.

The game starts off with a title splash before you can be led to a members area. This is essentially for all of your save data. A member is simply a save slot, though, in keeping with the golf theme, these slots are members as if you are part of a golf club.

Another interesting element is the fact that, instead of entering your name as text, you actually draw in your name in a picture (kind of like Jeopardy, only you have a much more limited space to work with. You can use stamps from pre-made pieces of art or you can try your hand with the regular tools. Don’t worry, unless you are very artistically inclined, the chances of you making something that isn’t completely ugly is pretty much nil.

From there, you ride the star to your first course. In total, there are 8 courses to visit. the 9th is simply a small space where you face off with King Dedede. Since you only have the first course accessible, you might as well select it.

Each course you enter has it’s own intro cutscene. This pretty much keeps in line with the tradition set from the very beginning where every world has a small sometimes funny cutscene that you can watch. From there, you land on the small start circle that occupies a single square. Courses are generally checkerboard in style, but there’s plenty of stuff that can go on this plain. You’ll see three enemies on the ground as the cursor of where your aiming initiates. The lines that goes around the play field are essentially walls that you can use to bank your shots. While this game is primarily inspired by golf, there are numerous elements from pool thrown in as well. You can tap down to extend the length of your guide or you can tap up to set up a bouncing shot. Additionally, you have the option to curve your shots. For bouncing shots, the target icon at the back of Kirby will go up and down. If you shoot at the top part, you’ll get a forward spin while a lower shot will create a backspin. Hitting Kirby at the center will produce a simple bouncing shot with no spin whatsoever.

When you do make your shot, a meter will go up and then back down. The higher the meter, the more powerful the shot. While it’s often good to get powerful shots at the beginning of the course, power has to be managed so you can ultimately land Kirby in the hole at the end of the round.

When you take a shot, you’ll use a tomato. Every shot/stroke costs a tomato. You have a maximum of four tomatoes and start off with these four at the beginning of every course. If you go down to two, Kirby will start to tire. With one, Kirby will huff and puff. Using all of them up will cost you a life. To replenish tomatoes, you run over or crash into enemies. Each enemy you defeat nets an additional tomato, leaving behind a pink star in the process.

The ultimate goal is to take out every enemy in the course. When one enemy remains, the enemy will magically be sucked into a hole. This hole is where you must sink Kirby to complete the round. Sinking Kirby in the hole will also net an additional tomato.

Like golf, you can get a hole in one. If you can defeat all of the enemies on the screen and sink Kirby in the hole in a single shot, you earn a hole in one (complete with fireworks display and, of yeah, an extra free life to boot!).

Along the way, Kirby will encounter a variety of enemies. These enemies are much like the enemies you may have seen in previous games. Also like previous games, you have the ability to copy enemies abilities as well. Some enemies will have none. Other enemies will net you an extra ability that you can use once per shot (including the shot you took to take that enemy out in the first place). These abilities can include freeze (which can freeze water and allow you to skate over top of it without a problem), wheel (turns Kirby into a racing tire and speed across the course), parasol (which can slow Kirby down on normal shots or allow Kirby to float down from the air back to the ground in a more controlled manner), and UFO (which allows Kirby to fly around for 5 unites of time, defeating numerous enemies in the process).

Along the way are numerous obstacles. There are trees which can block Kirby’s path (can be destroyed with the spark ability), water which can significantly slow Kirby’s shots (can be frozen), and sand traps which operate like you would expect (can be blasted through with the wheel ability). Additionally, Kirby can accidentally fly off course into the out of bounds area. If Kirby flies off, Kirby will fall to his doom and cause you to lose a whole life. While these are the traditional obstacles of golf, there are other obstacles involved as well. Besides the walls that can be bounced over, there are spinners that spin Kirby around (which can be switched off if run over by the corresponding button), zippers that speed Kirby up, slidewalks which gradually push Kirby around the course, arrows which push Kirby in a particular direction, spikes that deduct a tomato every time you touch them, trampolines that can give Kirby an extra bounce, and warp areas that teleport Kirby from one part of the course to another. to say the least, this game can keep things interesting outside of what you would expect from an ordinary golf game.

It is this variety that really makes this game work really well. Mashing together numerous ideas into a single game and making it not your standard par for the course game (excuse the pun) can represent a big risk as it can make it very confusing to players. This game, however, is very straight forward and approachable. It doesn’t take long to actually “get” this game. Meanwhile, the difficulty curve is also very well done because I don’t see much in the way of difficulty spikes. The 8th course is quite challenging while the beginning is quite simple. What adds to the replay value are the medals that you can earn. If you do particularly well in a particular course, then you can earn a bronze, silver, or gold medal. I don’t know what the exact number of shots it takes to earn a medal, but the fewer shots you take, the better your score overall. I can say that it has nothing to do necessarily with the high scores directly, though you can get an idea of what you can earn if you get some of the top scores found on that list.

The only issue I ever really had with this game is the fact that the final fight with Dedede makes little sense. You’re just taking bounce shots and hitting him repeatedly into submission. It has very little to do with what you played through in the game earlier. Fortunately, this covers a very small portion of the overall game, though.

Graphically, I found nothing really wrong with this game. Kirby is nicely animated – even when you try and increase the distance in the midst of a shot. The backgrounds in the distance were nicely done. The course layouts were well done. The obstacles were well designed. The numbers on the scorecard after were nicely animated too. The only thing I can say is that this game doesn’t strive to do much beyond the animated cartoon style, so I can’t say the graphics was necessarily amazing, but it is very well done.

The music was a real treat to listen to in this game. It keeps with the upbeat and cheery theme that has always been a part of a Kirby game for a while now. The sound effects were also very well done. I can’t think of anything to really critique in this game. The audio may not necessarily be mind blowing, but it is very good.

Overall, this game is a really good game. Sure, the final battle may be nothing to cheer about, but the rest of the game – a good 99% of the game – is very entertaining and interesting. Never would have thought that blending characteristics of different sports and adding Kirby in the mix would work so well, but this game does this quite successfully. A great game worth playing.