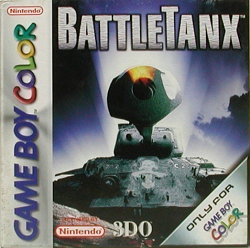 In this review, we play the top down shooter game BattleTanx. We find out if this Game Boy Color game levels the field.

This game was released in 2000 as a port to the N64 version which scored particularly well.

The plot is quite similar to the console version. You play the character Griffin. After the apocalypse, you find yourself on a quest to find Madison. In this world, while not quite as post-apocalyptic as the original N64, is still run by various gangs across the United States. This includes the Skull Riderz, Dark Angels, and Nuclear Knights.

You start in the classic M1A1 tank. In this version, the tank is blue. You have three lives and a full bar of health. If you run out of health, you blow up and have to start over from the beginning position. The benefit, however, is that whatever you’ve destroyed in the previous attempt (that won’t re-spawn that is), stays destroyed. If you damaged an enemy tank as you died, that tank will remain damaged in your next attack.

You can wind up in one of three tanks that have been selected for you. You could get the M1A1 tank which has moderate speed and moderate health. You can get the green Moto tank which is the fastest in the game, but contains the least amount of health. The third tank you can get is the red Goliath tank which is the slowest moving, but has the most health out of the three.

Aiding you is the crude radar system. This system involves an arrow that appears on the edges of the screen, helping you figure out where you need to go in the map. While this can be helpful, the limitation is that it points in the direction of the objective as the crow flies (not taking into account obstacles like canals, walls, blockades, etc. That is up to you to figure out.

Helping you along the way are various items you can collect. The most common is the little blue shield pickup. This operates a lot like the stars found in the N64 version in that they reward you with some extra health and points. The first few levels may have them as a regular item, but are most commonly picked up after defeating an enemy.

Other items are dispersed throughout the level. These can include the guided missiles which can help you aim at a nearby enemy. The missiles can also travel through most obstacles so you can kill enemies past obstacles. Another weapon is the bouncing bullet which bounces against permanent walls and structures. Useful for killing enemies that are just around the corner. The yellow tank icon serves as temporary invisibility. If you fire, then you temporarily lose that invisibility. So, you have to weigh what is more beneficial, stealth or destruction. The purple tanks are free lives. You have a cap of 9 lives in this game. Though 9 lives may not sound like much, for this game, that is more than sufficient. The health boxes restores a large chunk of your health. Unlike the N64 version, you can’t collect these as items you can later use. Finally, there is the nuke which will destroy everything on the screen. This is unlike the nuke in the N64 version where it operates like a giant highly explosive grenade. In this game, you have no risk of killing yourself by using this weapon. Great for taking down enemy Goliath tanks.

Impeding your progress include enemies. These enemies are typically enemy tanks that are also M1A1 tanks, Moto tanks, and Goliath tanks. All of these enemies share the same color scheme. Since you never have fellow tanks playing on your team, though, this is never a problem. Also impeding your progress are gun buddies. These are fixed turrets that attack you. All four of these enemies can fire a number of different weapons at you. These weapons are: the guided missiles, bouncing bullets, and regular tank shells.

One additional fact of note is the fact that you can get free lives just by scoring enough points. Seemingly, you get a free life for every 100,000 points you get.

when I was finished with the game, my immediate thoughts were that it was actually an entertaining way to spend a day. While the game didn’t have huge replay value involved, there was still plenty of enjoyment to be had in this game for a platform like this. Almost every review, of the few that were available, said that the game was complete garbage. A few gave it our equivalent of 50% and only one review gave it anything higher. This was quite a surprise to me because I didn’t think it was that bad. Was it amazing? Not exactly. Still, I found that this game had some entertainment value even if it was leaning towards the easy side of things.

The only things I would say that are negative is that this wasn’t a game that I would play over and over again. I will say, however, that while the game lasts as you work your way through the various difficulties, is the fact that this game can easily keep you occupied for a few hours.

Generally speaking, this game has a number of levels and is nicely varied in the levels keep you interested all the way to the very end. The radar system is helpful in making sure you don’t get stuck, but doesn’t exactly give too much away at the same time. This forces you to actually do some problem solving in terms of travel – not a bad thing in my books. While I never really ran into the issue of running out of lives, there is some challenge to be had in the hardest skill setting. Probably one of the more impressive things in this game was the fact that the game saved both what was taken out after you die, but also the fact that it remembers how much damage you’ve dealt against an enemy tank that managed to defeat you. The plot overall wasn’t bad either.

Graphically, this game wasn’t bad. The art in the cutscenes were obviously down-converted from the N64 art, but still weren’t that bad at all. The explosions, the rubble, and the various effects were pretty decent as well. No real graphical errors that I was able to find.

The audio was pretty good. Surprisingly, this game’s soundtrack resembles the N64 sequel, Global Assault, more than the original N64 game. Still, I thought it translated nicely into the handheld platform. What also gets a thumbs up is the fact that this game actually has a half-decent library of music as it changes from level to level. The sound effect were also half decent in this game. While some of them were pretty par for the course, others were also pretty good as well. Not bad for a handheld system at the time.

Overall, I thought this game was a pretty good one for a handheld system of the time. The game has a nicely varied mission objective system. It features an interesting mix-and-match system of enemies and enemy firepower. The levels are reasonable and forces you to think. This game may not have the greatest replay value in the world, but it does a good job at keeping you occupied for a day. Surprisingly, this game was quite undervalued by some critics out there. I would say that, despite what some say, this game was actually pretty good. If I had a choice between the N64 version and this version, I would say the N64 version easily wins. Still, that doesn’t make this a terrible game as I thought it was worth playing.