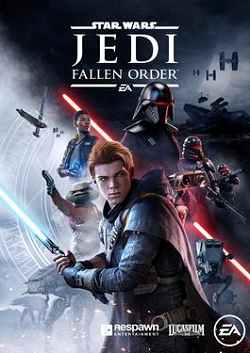 Another title will reportedly no longer have Denuvo DRM. That title is Star Wars Jedi: Fallen Order. This after a string of problems.

DRM maker Denuvo is now facing even more fallout. Back in July, the DRM was part of the controversy surrounding performance problems with Resudent Evil Village. Adding to this is the recent controversy about how it locks game owners out of their legally purchased games if their computer uses Intel Alder Lake CPUs. What’s more is that a domain name screw up left Denuvo DRM “protected” games unplayable for a whole weekend (it affected single player games which many argue is gives Denuvo less of an excuse to lock players out of their games). Many have concluded, though Denuvo didn’t confirm, is that it was the result of a domain name expiring (and there is evidence to lead to that conclusion).

Of course, as we pointed out earlier, if we were a game maker seeing all of this and idiotically using DRM in the first place, we would be asking questions by now about it all. Those questions might be “Are we really dumping who knows how much money into a company to ward off the evils of software piracy to a company who can’t even remember to renew a domain name critical to the functioning of the DRM?”, or “Exactly how many more headaches are we willing to put our customer service and tech support representatives through thanks to Denuvo?” or even, “When the **** is this horrible experience enough?” to name three.

Well, for one game developer, they did have enough. Last month, Square Enix removed the Denuvo DRM from their lineup. From Kotaku:

Denuvo is middleware intended to prevent unauthorized copying of games which incorporate it. While it isn’t uncommon for game publishers to remove the software after the launch window has passed, or to remove it from older, back-catalog titles that pirates have long plundered (like the previously mentioned Tomb Raider outings), NME noted that it is unusual for the software to be removed from a game like Nier Replicant, which pirates have yet to crack.

NME suggested Square Enix is moving away from using the software because of either potential compatibility issues with Intel’s imminent “Alder Lake” CPUs or due to its licensing expiring. This isn’t the first time Square Enix has removed the anti-cheat software from one of its high-profile video games. It removed the software from Life is Strange: True Colors back in September, just four days after the game launched.

Denuvo has gained notoriety as a migraine in software form among PC players due to its frequent need to authenticate with security servers before allowing games to launch, even for single-player experiences. More annoyingly, players often report that the software causes performance issues like stuttering, due to the software utilizing the PC’s CPU resources to continually run its anti-cheat checks.

Another game added to the list of games that is removing Denuvo DRM is apparently Star Wars Jedi: Fallen Order. From GameRant:

It’s fair to say that the likes of Denuvo would not be as controversial among the community if it didn’t cause so many performance issues with games. It even goes beyond stuttering with the disliked DRM tech causing games to become unplayable after an outage caused by an expired domain name. Fortunately, it seems that studios are starting to understand this pattern, removing the software post-launch, and now it seems that Remedy Entertainment’s Star Wars Jedi: Fallen Order becomes the next big title to follow suit.

According to a recent report, the studio behind 2019’s Star Wars Jedi: Fallen Order has taken it upon itself to get rid of Denuvo, a move which is almost certainly going to lead to a degree of happiness among the fan base. While the report doesn’t indicate exactly why the controversial DRM software has been removed, many will no doubt assume it’s down to the technology’s propensity for causing frame rate issues in games as the reason.

Now, it’s one thing to have a string of performance problems where the blame falls squarely on your product. It’s quite another to also have the headlines saying that game makers are dropping you like a used tissue paper on top of it all. To be fair here, making DRM to protect things like music and video games was always a fools errand in the first place. The fact that game makers are still trying to rely on a technology that has a more than decade long track record of never working arguably speaks to how game makers never seem to really learn from past mistakes in the first place. For those reasons, we’ve always considered DRM to be modern day digital snake oil in the first place. Still, that won’t stop some studio’s from repeating these mistakes and running into the waiting arms of the next DRM salesman that seems to be the latest industry trend.

As for Denuvo, it’s hard to see this situation as anything other than a full blown crisis. While DRM was never going to work in these conditions, the fact that the software only added a huge number of headaches on top of everything really isn’t helping. Ultimately, the Denuvo ship really does look like it’s taking on water. What will be interesting to see is if the company can somehow bail themselves out of this massive problem. At this stage, that is looking like a really tall order.