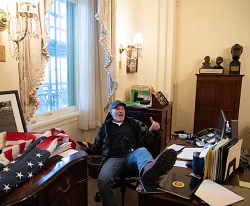 After yesterday’s right wing terrorist attack on the US Capitol, authorities are asking for evidence. Social media might be a great place to start.

It’s the day after right wing terrorists stormed the US Capitol. Their goal was to overthrow American democracy and seize control of the US government by force. They were egged on by US President, Donald Trump who, during an earlier “rally”, urged his supporters to head to the government buildings. After the extremist terrorists ransacked the buildings, Trump issued a video professing his love for his followers, then sheepishly suggested that they might want to go home now.

The calls to invoke the 25th amendment are continuing to grow louder. This is under the reasoning that, although there are 13 days left of the Trump Presidency, Trump remains a threat to American democracy. After all, many of those who assaulted the heart of American democracy are still at large. This is thanks partly to the fact that security effectively let a massive majority of the perpetrators go.

Authorities have offered an update on how many were arrested and how many have died. From WESH:

A violent mob loyal to President Donald Trump stormed the U.S. Capitol on Wednesday and forced lawmakers into hiding, in a stunning attempt to overturn America’s presidential election, undercut the nation’s democracy and keep Democrat Joe Biden from replacing Trump in the White House.

Washington, D.C., Police Chief Robert Contee said the dead on Wednesday included a woman who was shot by the U.S. Capitol Police, as well as three others who died in “medical emergencies.”

In another report, authorities, including the FBI, are seeking evidence from anyone who may have it. From WREG:

The FBI is asking for the public’s help as it continues to investigate the people involved in Wednesday’s violent breach at the U.S. Capitol.

On Twitter, The Washington Field Office said it is seeking information to “assist in identifying individuals who are actively instigating violence in Washington, DC.”

The agency is urging people who saw unlawful activity during the violent protests to submit information to them. The FBI has provided an online tips form.

“If you have witnessed unlawful violent actions, we urge you to submit any information, photos, or videos that could be relevant to the #FBI at http://fbi.gov/USCapitol.”

While there may be some physical evidence, perhaps the biggest form of evidence may come in the form of video evidence. Trump supporters, as many know, are also against mask mandates. So, many of them not only refused to wear masks, but they also shot hours upon hours of video footage of their attack on democracy as well.

That video evidence made it onto social media which will no doubt help investigators track down those responsible for the attack. A great example is a video on Twitter showing a parade of rioters leaving through some doors with the words “murder the media” scrawled on the outside. Many of them are not masked and their faces are in plain view of the camera.

A line of people exit the Capitol building. One bloodied in the head and more came out who previously stormed the building. pic.twitter.com/0MF2aAp3Ly

There are also plenty of pictures too. One example is the following that shows a group selfie as extremists hold a piece of government property:

All this in addition to the video footage no doubt captured on the property. There might also be other’s that have evidence as well. Indeed, a CBC reporter who happen to be on scene was mobbed by Trump supporters. Footage of the verbal assault was ultimately posted on CBC afterwards.

Trump called the press "the enemy of the people" earlier today at his rally. https://t.co/iSnQNyBb0r

So, indeed, if authorities are looking for evidence, they really don’t have far to look at this point. If anything, they have a mountain of evidence they can freely comb through at this stage.

Of course, the situation with authorities is complicated by the fact that some were seen not only removing barricades to allow the terrorist attack to proceed, but also have been seen taking selfies with the attackers as well. The question is: will those officers be charged for assisting in the terrorist attack or not?

At this point, the United States is left to pick up the pieces after the Donald Trump induced attack on democracy. While some may be blaming social media for helping the tensions to get this far, social media may also play a key role in giving investigators evidence that will assist in tracking down these mobsters in the first place.