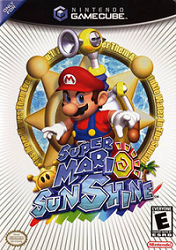 Super Mario Sunshine is one of the many Super Mario games released by Nintendo. We look at the first video game we’ve ever reviewed that was released on the Gamecube.

Super Mario Sunshine was released in 2002. It was suppose to be a groundbreaking sequel to the very well put together game, “Super Mario 64”. It also, like many of the Super Mario games, showed off what the GameCube was capable of in terms of power.

The game starts with Mario, Peach and Toad flying in a plain to an island for a long vacation. After they land, Mario meets FLUDD (Flash Liquidizing Ultra Dousing Device). FLUDD becomes a somewhat permanent partner of Mario when Mario is wrongly accused of making a mess of the island. As punishment, Mario is tasked to clean up the island, but the real goal for him is to clear his name as an imposter has been the one creating havoc throughout the island.

You start off in a sort of “main lobby” for the game which is the main city of the island. Like Super Mario 64, you can access numerous levels throughout the game through this main city through the painted “M”s that appear as you access them. Another aspect of the game is that you can refill FLUDD with any water source. Being an island, there’s plenty of them to go around.

Having thoroughly enjoyed Super Mario 64, I had high expectations for this game, hoping to at least replicate the level of “fun” I’ve had with its predecessor. Unfortunately, I was disappointed in it. As I was playing this, the FLUDD felt like a gimmick more than an interesting ad-on in this game. In addition, coin placement depended hugely on which sprite you selected on the way into a level. As a result, you are left with the impression that coins were laid out half-hazardly as opposed to the far more consistent layout of the N64 predecessor. Sometimes, it’s not even possible to get 100 coins in a level (which gives you a sunshine sprite) which left me more focused on getting the original sprite I chose to go after.

The tightropes featured throughout the game seemed like a good idea on paper, but ended up being a feature that made me go “meh” by the time I got most of what I needed to collect. The extra levels where the imposter steals the FLUDD (and reducing your abilities as a result) made the game seem rather clunky more than anything else. After speaking to others about this game, apparently, this game was a “love it or hate it game” and I ended up being in the latter category.

The strongest point, by far, about this game was the graphics. You could almost feel the heatwaves coming off the screen as Mario works his way throughout the island. The effects of the water was also a very nice touch. Everything had an interesting shine to it and you didn’t have that “box” level feel that you had in Super Mario 64 where most levels, to varying degrees, felt like you were playing inside a large box. Super Mario Sunshine succeeded in removing that feel altogether with distant object that almost became part of the background as you found yourself on another part of the level.

The music was decent enough and the sound effects were very well done. Not much else to say beyond that.

Overall, FLUDD took on a way larger role in this game than it needed to be. If it was just something you could get as a power-up on certain parts of the game, then it would have been an improvement. Instead, FLUDD changes the dynamics of Mario in a way that I didn’t think gelled too well. I eventually just got bored of this game and never really completed it which, to me, isn’t normal because I normally enjoy Super Mario games. Out of all the Super Mario games I’ve played over the years, this particular game actually falls close to the very bottom in terms of likability. I’m left with the impression of, “What is Nintendo doing?” because this seemed somewhat out of character for Nintendo to release something mediocre for it’s flagship franchise. At the end of the day, this game just wasn’t for me.

Overall
Furthest point in game: Unlocked and entered Pinna Park and got most sprites all the way up to that point, but eventually got bored and stopped after defeating mecha-bowser.