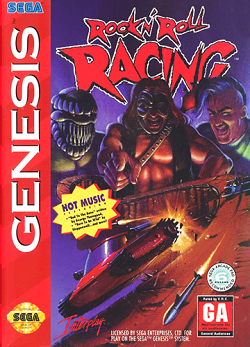 In this review, we sit down, strap in, and shut up in the Sega Genesis game Rock N’ Roll Racing. We find out how well this top down racing game plays.

This game was released in 1994. We previously played the original SNES version and found it to be a pretty good game. So, we thought we’d try the Genesis port to see if it is just as good.

Since this game is so similar to the SNES version, we thought we’d focus on the differences between the two versions.

Probably the biggest feature this version has is the fact that there are far more tracks. This feature is perhaps one of the only advantages it has over the SNES version, but it is a pretty solid advantage. More tracks reduces any sense of repetition. In the SNES version, the tracks you see in Division B simply get repeated in Division A. The real difference is the fact that your opponents have better upgrades. Meanwhile, in the Genesis version, Division A features whole new tracks for you to race through.

A disadvantage here is the health bar. In the SNES version, you have lights that indicate your damage. In the Genesis version, you get a stripped down health bar. The more painful part is the fact that your vehicle can be much more destructible – especially in the harder difficulties.

Generally speaking, the gameplay is improved somewhat. I would have liked to have seen a few additional features given how much longer this game sat in development, but I’m not complaining with what I do see here.

Graphics, meanwhile, is a surprising letdown for me. Given that the game had a year more development time, I half expected the graphics to have seen some additional polish. This is especially true given that the Genesis is capable of handling some pretty flashy games. Instead, this game is largely identical to what is found in the SNES version a year earlier. What’s worse, items are harder to see. Gold upgrades on the track are a dull grey block. Health boxes are even muted somewhat. Overall, a pretty disappointing aspect of this game.

Audio is also a pretty big letdown. In the SNES version, the tracks truly sound like actual rock tracks with crisp percussion’s and blaring electric guitars. This adds so much personality to the game. In the Genesis version, this is swapped out with comparatively muted and bland MIDI style versions of the tracks. While there is one additional track in the game, it doesn’t make up for the drop in audio quality. Voice samples are largely the same, albeit subtly higher quality. Sound effects meanwhile are pretty bland by comparison.

Overall, this game is a definite case of give and take compared to the SNES version. The big upside is the game features a pretty big upgrade in number of tracks. The downside is that the health bar is stripped down. The graphics, surprisingly, took a slight hit. The audio is sadly muted and the additional track just doesn’t make up the difference. While this game still provides players with ample entertainment, you’re better off with the SNES version if you had a choice. This, of course, depends on what you value more in a game, but for me, the SNES version just barely edges out the Genesis version.