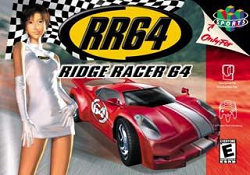 In this review, we try to be the new champion in the N64 game Ridge Racer 64. We find out how well this racing game plays.

This game was released in 2000. It is the first and only time the series made an appearance on this platform. This is a series that we have become quite familiar with already. Previously, we reviewed the game Ridge Racer and found the game to be mediocre despite its impressive graphics. We then reviewed the game Ridge Racer Revolution and found the game failing to really excite. We found that the series began turning things around with the third game, Rage Racer. That game introduced a monetary system as well as a more proper progress ladder. Finally, we reviewed the game R4: Ridge Racer Type 4. Unfortunately, that game did take a few steps back along with a few steps forward. That brings us to the current game.

When we went into this game, we were curious to see if the series picked up even further after finally gracing this console. A complete turn around wouldn’t be unprecedented. We’ve previously seen the series Destruction Derby jump from a poor showing on the Playstation to the N64 and found the transformation to be spectacularly for the better. So, we are open to the possibility that it can happen again.

The game itself could be best described as a mashup between the original Ridge Racer, Ridge Racer Revolution, and even Rage Racer. In the Grand Prix mode, the game features both the tracks found in Ridge racer and Ridge Racer Revolution. This includes all three routs that were in the previous game. While there may have been some slight modifications with what is found on the sides of the track, the tracks themselves remain largely intact. The game also features a third track called Renegade which, itself, has three different routs. If you are lucky enough, you’ll also unlock a fourth “Extreme” track which is a very windy single rout 4th track. It is also significantly shorter than the other three tracks and doubles the number of laps because of this.

The Grand Prix mode has you flipping back and fourth between regular courses and a “car attack” mode. At the beginning, you get 4 cars. The first car is an even balance between speed, acceleration, handling, and grip. Another car focuses on acceleration. A third car is more concerned about cornering. The final car is tuned for high speed. You then get a choice of the three “novice” courses. These courses feature the easiest course routs and pits you against the easiest of opponents. You can tackle the courses in any order, but you must beat all three to move on.

If you beat all three courses, you’ll unlock three “car attack” races. In each mode, the game simply pits you against one other car. If you beat that race, you win your opponents car. If you beat all three of these races, you’ll not only obtain three additional cars, but also three “intermediate” courses. These courses are the same as the first three, but take you on a more difficult (typically longer) rout. Win all three races and you get to tackle three additional car attack races. The system repeats for the “expert” courses.

If you manage to beat every race, you’ll get a credits roll. After that, you get to take on a more difficult “extra” course set. This is effectively the second half of the game. While the courses are the same, you are pitted against more difficult opponents. In addition to this, you race the courses backwards. If you complete this second half, you’ll obtain the extreme races. There is only 2 races on this 4th course, but even getting here, let along beating it, requires a high level of skill. My understanding is that if you complete that set, you’ll be able to make an attempt at winning the platinum trophies.

This ladder structure has its similarities to the ladder found in Rage Racer. After you beat each set, you are able to unlock new cars. The difference is that, instead of buying the next set of cars, you simply race against said cars to earn them.

The difficulty curve is probably where my first complaint comes from. Even though you do unlock new cars throughout the game, very few unlocked cars can prove helpful. In fact, the first set of cars you unlock is largely useless because their stats are worse than the all around car you get right away. The second set of cars are practically useless because you can easily carry yourself through with the car that emphasizes speed. Really, the first useful cars can be unlocked towards the end of the normal mode where it’s possible to unlock cars faster than the car you have from the very beginning. From there, some cars can emphasize handling better while still retaining most of the speed, but that isn’t until you are well into the Extra stages.

The kind of cars unlocked is crucial to the difficulty curve. Once you unlock a particularly useful car, the difficulty actually drops, making a number of courses easier than with the courses you have without that car. That means that the difficulty actually spikes a number of times along the way. Towards the end, you are basically playing until you get bored of losing because the difficulty demands practically perfect driving on courses that are exceedingly difficult. As far as I’m concerned, 99% of players won’t ever really see the end unless they see someones winning play on YouTube.

Another complaint I have with this game was something I wasn’t expecting to see given that R4 largely solved this: car physics. The bad physics found in the first two games has made a return into this game. You need to pull of some drifting on certain corners. While it is more than possible to touch the break lightly and practice efficient cornering on some of these turns, drifting becomes a necessity on other corners unless you intend on bashing into the wall or breaking so much, you lose a bunch of ground.

The only reliable way I found going into a drift is letting off on the accelerator before entering, turning, and tapping the break when I want to go into a drift. Without this method, it was largely up in the air if my drifting worked.

Exiting a drift is an even greater nightmare. The game forces the car to turn left and right randomly after leaving the turn. When the sliding ends is completely up in the air. You can either see your car face the correct direction and continue on down the track or end while facing a wall, forcing you to bash into it. The only thing you can do is try to steer the car to the middle and hope for the best.

The most strange part of the drifting system is what the car does during the corner. The car doesn’t simply automatically turn around the corner. Instead, it seems to follow invisible tracks around the corner. This means it is possible to grind along the wall while drifting. So, the best thing you can do is enter the corner and begin drifting on the inside lane. You should be able to leave the turn at least towards the middle. This strange drifting system means two things. For one, it is very unrealistic. For another, it is very unpredictable. In races that demand near perfection, unpredictability is a very bad thing.

Generally speaking, while I was excited for this game, it wasn’t a particularly amazing game. It is one of the few games so far in the series that has a sufficient number of tracks. In a way, it is ironic that this game had so much content given the cartridge restrictions. The first two games had an entire CD to work with. It also has an interesting ladder concept. Unfortunately, the game carried over the bad physics found in the first two games. It also has a number of difficulty spikes thanks to what gets unlocked. It also gets so difficult, few players will ever see the end. As a result, you pretty much play until you get bored of losing.

Graphically speaking, this game wasn’t the most amazing in the world. This is surprising considering the history of the series. It was sufficient, but nothing that is mind blowing by any means. There’s plenty of environment to see and the lighting effects were decent on the track. Unfortunately, the 2D sprites and some of the graphics were a little blocky for my tastes in a game released in 2000. The graphics are more on par with a game released somewhere between 1996-1998, but not 2000.

The audio was barely sufficient for me. The sound effects were OK, but there could have been more variety in the car engine sounds. The music, meanwhile, does help give you that sense of white-knuckled racing, but unfortunately, wasn’t all that memorable.

Overall, this game was not bad, but nothing amazing. There is plenty of gameplay to be found here, but the difficulty spikes and ramped up difficulty towards the end will make this game largely unbeatable for most players. Some of the cars that are unlocked end up being completely useless. Still, this game did finally give the player a sufficient amount of tracks to play with. It’s only the second time this series has, so far, accomplished this. A decent, though somewhat short-lived game.

Overall
Furthest point in game: Finished 2nd on the last Extra track. Beat everything else.