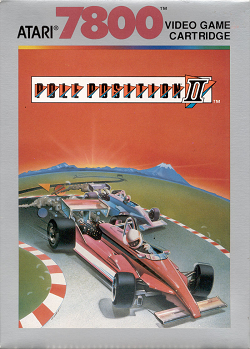 In this review, we put on our racing helmet as we play the Atari 7800 game Pole Position II. We find out if this racing game is worth playing.

This game was released in 1986. It is a port from the arcade game.

The game revolves around four tracks. Whatever track you select, you must try to complete a “qualifier” lap. The better the time you get, the higher the position you start the race. Ideally, you get the pole position which nets you the most starting bonus points. Whatever position you earn in the qualifier (worst case scenario, you start in 8th place), you’ll be brought to the main event after.

In the main event, the goal is to complete 4 laps. While there are other racers on the track, the biggest challenge revolves around “units”. You might think units is referring to distance, but surprisingly, this is actually the amount of time left to race in. If you run out of units, the race is over. If, however, you complete a lap, you’ll win “extended play” and get a time bonus.

In total, there are four tracks to choose from. Each track increases in difficulty. If you are new to the game, track 1 (test track) is an excellent training ground to master the basics.

Interestingly enough, there is a low gear and a high gear. Low gear is seemingly meant for getting the vehicle up to a decent speed. High gear can take you from a decent speed and move you up to the maximum speed of 255MPH. To maintain speed, you hold down the accelerator button. To increase speed in the Hi gear, you push up. To lower your speed, you can push down.

At the end of the race, whether you finish or not, you’ll get a tally of points based on performance. While you’ll constantly rack up points by making greater and greater distances, you’ll also get extra points at the end for an even bigger final tally. Every pass of an opponent nets you 50 points. If you complete the race, you’ll get 100 points for every “unit” you have left over.

In the higher, more difficult, tracks, there is a hazard to watch out for. While they are not present in the qualifier, puddles appear on the track. These puddles will slow your vehicle down, so avoiding them can be important in completing laps in time.

One thing I found bizarre in this game is the inclusion of opponents in the qualifier. They aren’t a big factor on the test track, but the point of a qualifier is to test your time while alone on the track. Why include opponents in the first place is beyond me.

An annoyance with this game is the delicacy of vehicles. While I can understand running into signs would result in an explosion, even small bumps cause it. If you bump into an opponent, even if it’s a light tap, both you and the opponent explode. This is particularly bad because even one explosion will make it difficult to make laps on time.

The good part about this game is that it is fairly straight forward to learn. The learning curve is pretty mild here.

While the difficulty is on the tougher side of things, the game does give you a chance. With the test track, you can gradually master your moves and take these skills to other tracks. So, while the difficulty curve isn’t perfect, it is pretty well thought out.

Generally speaking, this game has its flaws. This includes the fact that cars explode too easily and the inclusion of opponents in the qualifier races. Still, it’s a game that gives new players a chance with easier races. Along with a decent difficulty curve, the learning curve is pretty mild. So, it’s more than possible to learn this game early on. A pretty solid game.

The graphics are a pretty big strength here. The third person perspective is certainly a technological achievement for the time. It even has great depth perception to allow players to maneuver around with. While some games have a lifeless track on one color background, this game features occasional road signs. This helps visually break things up and gives the track some life. The backgrounds were also well designed. So, one of the few great games for eye candy on this system.

There is some pretty decent music that goes along with it. While the quantity is a bit lacking, it isn’t terrible either. The sounds of the engines (both yours and the opponents) are well realized here. You can tell how fast you are going based on the sound. The opponents engines helps add a sense of realism to the course. So, nicely done.

Overall, this is a great game to play. The learning curve is mild and the difficulty is set so that new players can more easily get into the game. This game will also challenge more experienced players as well. This game isn’t without its flaws. The cars do explode too easily and opponents do appear on qualifier races for no real good reason. Still, the third person perspective graphics is nicely done and the sounds are well realized. Definitely a good game to play.