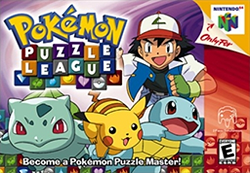 Pokemon Puzzle League is a puzzle game with the theme of Pokemon. Much of what was found in the game was taken from an earlier SNES game. We take a look at this transition.

Pokemon Puzzle League was released in 2000. While its central theme is based around Pokemon, much of what the game is takes from the 1996 game Tetris Attack from 1996.

There isn’t much to the story. It follows Ash, a Pokemon trainer that sports a baseball cap with what appears to be a toe-nail clipper design on the front. He takes his three Pokemon to a town that revolves around the Puzzle League. That’s pretty much it.

The game is pretty straight forward. Match tiles that look the same together. Get 3 in a row and you’ll clear those blocks off. Get 4 or more in a row and you’ll get a chain. This either stops the timer (in single player mode) or puts junk in your opponents playing field (vs. mode). You lose if the blocks reach the top of the screen as more blocks are constantly being pushed up through the bottom of the screen. If gravity pulls down a block and it matches up with 2 or more other like blocks, you’ll get a combo. The player makes these matches by moving the cursor around the screen and switching two blocks that are side by side around until they match. The game gets difficult as the blocks move up more quickly or you are faced with a much more difficult opponent.

One thing that was immediately apparent in the game is that there’s not a whole lot of variance between this game and Tetris Attack. Just some changes in the artwork and sounds. Beyond that, what exactly is significantly different between this game and its SNES counterpart exactly? In two player mode, you have three different modes of difficulty. The harder the difficulty, the higher up the vs. mode chain you can go. Otherwise, it’s essentially a re-skinning of Tetris Attack for the most part. The only differences I saw beyond the artwork was the ability to choose a Pokemon to take with you in battle. What difference does that make in the gameplay, exactly? I really never noticed. This useless choice seemed to just try and marry the game to Pokemon more than anything else. Otherwise, you get a few different sound effects whenever you get a combo. That’s it.

Single player mode seemed to be even more poorly thought out. At first, it’s pretty much the exact same problem as 2 player mode, but as you progress, it becomes obvious that the formula that worked so well for Tetris attack was messed with. The beginning is very easy. The pieces move up very slowly and you have all the time in the world to basically get your barrings. After a few levels, you come up to a boss. Remembering what it was like in Tetris Attack, I thought it was an introduction to how hard the game can be, so winning was optional. Since I had beaten Tetris Attack, I was able to defeat the first “boss” of the game. After that level, I was thrown into a tube-like version of Tetris Attack. Instead of the flat board, I had to ensure that every column in the entire tube never reached the top. It became immediately obvious that the difficulty never went down after the boss battle and only grew harder. So, rather than having that difficulty spike as an optional window, the difficulty spike was made permanent instead. What you have is a game that starts off really easy, then suddenly becomes extremely difficult where only people that can pull off large combo’s regularly or can move that cursor ridiculously fast and gain chains frequently can survive. This, I felt, was a regression from the SNES version rather than an improvement on the developers part. I think what would have improved it is if the difficulty curve remains where it was and put this “tube” version as an unlockable mode if you beat the regular version of this game. Pushing this concept onto the player would only serve to frustrate.

To be fully transparent, I never liked Pokemon. I saw a few episodes of the television show and despised it ever since. So, this is not a game I would normally even consider playing to begin with. Knowing this, I never knew, up until I played this game recently, that Tetris Attack was remade. So, my personal tastes say that the Yoshi themes in Tetris Attack are more tolerable than the Pokemon themes in this remake. I can’t judge this game based on that, so this doesn’t factor into the review. However, I do note that I think this game would have been better served if the Pokemon themes were stripped out and replaced with the Nintendo Yoshi theme because people like me, who don’t like Pokemon, might still have played this game. Wrapping this game in the Pokemon theme’s, ultimately, was a mistake in my view as it basically shuts the door on a portion of the gaming community that doesn’t look too fondly to Pokemon. Besides, Pokemon themes risks making the game seem dated eventually (if it isn’t already based on theme alone).

One of the few things this game got right was to incorporate sound effects of ridicule in the single player mode whenever the player is in danger of losing. I thought this was an interesting twist and one twist that fit well with the scant storyline that does exist in this game. Another thing that was done right was to have unlockable difficulties in the vs. mode of this game. That alone extended the life of the game as the player was able to get to the harder difficulties, carry on through and have enough confidence to try the hardest difficulty once the code to unlock it was revealed.

One glaring negative in this game, which I hinted throughout the review, was an attempt to marry the Tetris Attack idea to Pokemon. If it was possible to marry the two concepts together, the developers of this game failed to find it. I think they could have stripped out all the Pokemon creatures and make the game make more sense than it’s current iteration – even in the vs. Mode. Sure, you could choose the Pokemon you want to use before each battle, but if it made any significant difference in the game play, I didn’t see it. It was like the developers took a game that worked well, slapped a well known franchise on it and hoped it helped make the game sell. Whether or not it actually worked, well, who cares? Well, I do care and it didn’t work.

The graphics were decent. I do note, however, that SNES attributes were carried over to the N64 version. In all fairness, it’s hard to top what was pulled off in the SNES version, but I would have thought gameplay graphics could have been improved to something that couldn’t be pulled off in the SNES. One game on this system that took a classic game and improved the graphics on it to offer something better would be The New Tetris. Improvement on the graphics could have been done, but ultimately, it seemed more attention was paid to the animation clips instead. The animation clips were fine, but really are a simple sideshow to the actual game. Even the “tube” version in single player could have been pulled off on the SNES. So, ultimately, a disappointment on that front.

The music was decent enough. You have that elevator music vibe to it which, I have to admit, I didn’t mind. It followed along with the similar vibes found in the SNES. The sound effects seemed to ultimately be borrowed content from both the Pokemon franchise and the SNES game. While it was OK, it wasn’t really all that impressive if you wanted to find something innovative. It worked, but it would be what you’d expect.

Overall, this game attempted to marry the concepts presented by Tetris Attack and Pokemon. I don’t think it really worked all that well. A vast majority of the game mechanics was simply carried over from the SNES version onto the N64. Perhaps the only mode I found really worth playing was the vs. mode as that seemed to contain a formula that was least tampered with. Even then, you have that awkward, and ultimately worthless, “choose your Pokemon” portion to deal with between rounds which is followed up by the equally pointless winning of a badge portion every time you win. Otherwise, unless you like the puzzle mode, there doesn’t seem to be a whole lot this game has to offer. If you liked Tetris Attack and want to see what they did, you’ll probably be disappointed. If you like Pokemon, you might find this game entertaining. If you don’t like Pokemon, this game may not be worth it and I recommend Tetris Attack instead. If you want to check out the unique concepts this kind of game offers, play Tetris Attack for the SNES instead. At best, this game can cater to a subset of gamers, but that’s about it.

Furthest point in game: Beat single player mode by exploiting the near death freezes and chaining my way to winning. Made it to level 9 on very hard mode before a constant barrage of chains, simple combo’s, and raw speed isn’t enough to beat opponents.