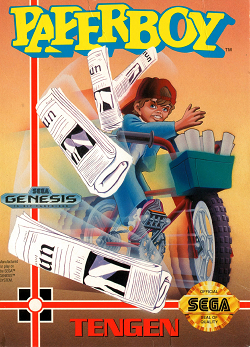 In this review, we get back on that bike in the Sega Genesis game Paperboy. We find out if this action game is worth a try.

Since this game is so much like the Game Boy Color version, this review will focus on the differences.

One big difference is the sped you can travel. If you simply allow yourself to coast, you can travel at a very slow rate. This helps in getting your papers at the targets (be it the doormat or the mailbox). This certainly makes things easier while you travel along.

What makes things more challenging, however, is the fact that a broken window or any other kind of property damage can spell the end for that subscriber. That does add to the challenge of this game.

One way this game is easier is the lower threshold of subscribers. In previous games, you need to have a certain number of subscribers or else you’ll get fired. In this game, I was never able to reach that threshold. If you deliver to very few houses on the first day, they will cancel, but the game will boost your number back up by a few houses and tell you to deliver to customers. Additionally, I was able to get the subscriber count to 2 and I was still able to make it to the next day. So, if there is a threshold of subscribers you need, I was never able to reach it. That takes some pressure off of performance requirements, that’s for sure.

What is an improvement is the fact that this version is able to show more of the playing field. You can simultaneously see the houses in full as well as the street almost in full. This means that screen limitations are gone completely here.

The downside is that this game was released on a console during a time when the complexity of games have increased. This game is competing against games like Super Mario World and Gradius III. So, while it does have some basic features, this game does struggle against other console games that are popping into the market.

On the plus side, this game does have a very reasonable difficulty curve. This is unlike a number of Genesis games we’ve seen earlier on. The simplicity of the game also helps with the learning curve. As a result, this game is a very approachable game.

Generally speaking, the gameplay might seem a little dated for a game of its time. Still, it does hold up somewhat thanks to a reasonable difficulty and learning curve. It still manages to be entertaining. While some things about it make it more tricky, the technical limitations that hurt the handheld versions are lifted thanks to the game being on a console system. So, all in all, a pretty good game.

The graphics are well done. Everything is clearly drawn and drawn well. Various obstacles are nicely animated. The thing about this game is that it is competing against a number of SNES titles. As such, the single level plus bonus area does reduce the quantity of quality art found in other games. So, a pretty good job, but there’s better out there now.

The audio is probably the biggest strength in this game. While the music selection is fairly limited, the big strength is found in the voice samples. While we’ve heard voice samples in other games, the large quantity of samples is quite impressive. This alone makes up for the slack left behind by the limited music selection. A very good job.

Overall, this is a great game to play. Some elements such as no property damage to subscribers add to the challenge. The lower threshold for subscribers does make things easier, however. With a good learning and difficulty curve, this game becomes both approachable and challenging. The graphics are reasonable, but there is better to be had out there by this release year. The audio is a strength thanks largely to the large library of voice samples. The music is decent, but very limited. An overall great game.