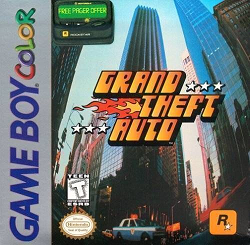 In this review, we turn to a life of crime in the Game Boy Color game Grand Theft Auto. We find out how well this action adventure game plays.

This game was released in 1999. It is a port from the MS-DOS version. While the series is probably one of the most recognizable to date, this first game marked the humble beginnings of this franchise.

You start off by selecting a character. After that, you make a custom name for it. From there, you can start your adventure in Liberty City. You are basically ordered around by the gangster boss to perform certain tasks to complete missions.

While you can start your missions right away, it is also possible to wander the city to pick up power-ups. Power-ups are located in the big white crates. Many of them carry pistol’s and machine guns. Others carry electric bolts (don’t know what they do) and armor to protect yourself.

Your main mission is to complete objectives given to you. In each play, you may get a different mission to complete. In a lot of missions, you are simply following the little arrow that hovers over you. The first objective is to answer the flashing phones near the park. At that point, you get your first mission. From there, you may be given an arrow or you may not. It really depends on what that mission is.

The controls for this game are not immediately obvious here. “A” allows you to move in the direction you are facing. Left allows you to turn counter-clockwise while right turns clockwise. Pause allows you to view your current objective. Select toggles your weapon and “B” allows you to fire that weapon. When you approach a vehicle, you can take it over by holding select and pressing “A”. While in a vehicle, select will allow you to get back out. General movement is otherwise the same.

Probably one of the most often cited criticism for this game is the difficulty. There’s supposed to be four levels, but I couldn’t get much further than one mission. Sometimes, it’s unclear what counts as a complete mission (i.e. parking the taxis at the dock). Other times, it’s annoying just to take out enemies (i.e. following the lawyer mission). Sooner or later, you’ll find yourself in a seemingly insurmountable situation. As a result, the game becomes less playable.

One positive to this game is the open world nature of the game. You can complete objectives often at your leisure (obviously, there are exceptions to that). This does open up some interesting possibilities.

Another major downside is the handling of vehicles. The vehicles generally drive too fast. Because of this, it’s difficult to really control them. The good news is that it seems that cars don’t take any damage when ramming into fixed objects or other non-police vehicles. The bad news is that you’ll likely find yourself experiencing the bumper car-like physics of the game. Throwing the car in reverse often makes the vehicle easier to manage, but you don’t get very far very quickly.

Generally speaking, vehicle control hampers things a lot in this game. The difficulty of certain missions makes this game more annoying than fun. In fact, the overall difficulty is a big drawback for this game. Probably the only plus side to this game is the open world environment. As a result, this game is not the greatest game in the world.

The graphics are also fairly plain in this game. While they aren’t terrible, it’s hard to find any way to praise them as well. It’s a nice compliment to the open world environment, but nothing to get excited over.

The audio isn’t much better. The music does a decent job at complimenting the action, but there isn’t much that is memorable here. The sound effects in the mean time are pretty standard. Nothing really exciting here.

Overall, this game is less than stellar. The difficulty of certain missions often stops the players progress dead in their tracks. The general difficulty also makes things less exciting. Vehicle control is very annoying and will often cause you to run into other vehicles or crash into buildings simply because they drive too fast. The graphics are OK, but the audio is not that memorable. Not a great game.

Overall
Furthest point in game: Beat 1 mission and got a top score for the first level.