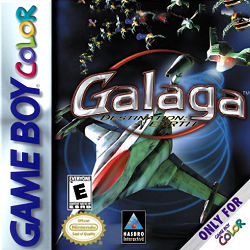 In this review, we make our way to Earth in the Game Boy Color game Galaga: Destination Earth. We find out how well this top down shooter plays.

This game was released in 2000. We have played another version of this game before. This is when we reviewed Galaga on the Atari 7800. It didn’t do very well in part because gameplay was generally outdated for the time. So, we thought we’d try this one to see if it’s any better.

If you played Galaga on the Atari 7800, enemy behavior is pretty much the same. The only real difference is that the patterns are a little easier to identify. They are also a little slower in making their formations which means players have a better chance at taking them out before they start firing at you.

While these are advantages, there is one huge disadvantage: the play space is exceptionally wide. If an enemy does make the formation, it is generally a lot tougher to pinpoint them. This is because the play space is twice the width (or maybe more) than what you can see. So, you have to move side to side to find the last remaining ship.

What makes this game even more challenging is that enemy accuracy is much tighter. The shots are faster and more accurate. If they fire at you, there is a very good chance you can get hit. Because some shots come from off screen, it’s even more difficult to figure out if you are even under attack.

One new feature in this game is that levels are broken up. After a few phases, you’ll advance to the next area. While enemy formations are generally very similar, you do get a new background and even a level name.

What I was hoping for going into this game is some sense of progress for this game. What new features are added to keep this franchise competitive against other games. While console games have moved well into the realm of 3D and even the world of portable devices starting to go in the same direction, what features really make this game stand out and withstand the test of time. Unfortunately, this game really didn’t advance much – if at all compared to some other franchises.

While this game does break up the levels so that you get a new “world”, there isn’t much that differentiates this game from other games that does this. What is more painful to see is that the levels and strategy are largely the same from level to level. You don’t get any special power-ups and there isn’t much this game has to offer that even the Atari 7800 version doesn’t as far as gameplay is concerned.

What’s worse is that this game is much more difficult to play thanks to the limited screen space. Even if developers are forced to stick with a side-scrolling mechanism, at the very least, indicate enemy positions with markers. Instead, you are left with the side scrolling system that only serves to annoy more than anything else.

The length of the gameplay really hasn’t changed all that much. You can easily have your fill in a half an hour or less before moving on to other games. While this could almost be excusable for the Atari 7800, it is less forgivable for a game released in 2000. I’ve played handheld games released by now that can take me the better part of a week. This game? Not so much. As a result, this game ends up lagging far behind other games.

Generally speaking, this game takes the franchise one step forward, and several steps back. The breaking up of the levels is a nice step forward. Unfortunately, the steps back involve the annoying side-scrolling element without anything to compensate the limitation. The length hasn’t changed which makes for another step back. While it is interesting that such a game is brought into the year 2000 on the handheld environment, it contains hardly anything that makes it worth playing.

In the area of graphics, there was at least an attempt to update things. There is the new backgrounds that try to give the game a little more flash. Unfortunately, some of the backgrounds end up being a mess of colored pixels. It’s like high quality pictures were down-converted for the screen and some of the pictures ended up getting somewhat mangled. It is especially bad in the menus where text is just thrown up for a basic user interface. The end result was that text got lost in the mess, resulting in something that is not easy to read. So, a bit disappointing if you ask me.

The audio is another sore spot for this game. There is some music to be heard, but they end up being some low quality jingles that can, at times, be hard to hear. The sound effects are alright, but the backing music left a lot to be desired.

Overall, this is another game that was taken from the mid to late 80s, given a small makeover, and brought to a more modern system. The end result was outdated gameplay and a carelessly thought out side scrolling system that served to annoy. Even some of the elements that helped make this game what it is got a little lost in the mix. Some thought was put into the graphics, but some of it ended up being a mess of colored pixels. The audio also left a fair bit to be desired. So, in the end, I can’t recommend playing this game.