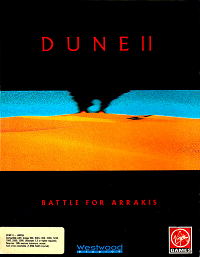 Dune 2 is our first strictly DOS gave we’ve reviewed. The game is based off of one of the most famous novel series by the same name. Dune 2 is a top down realtime strategy game.

If you’ve been playing games when Windows 3.1 was at its prime, chances are, you’ve played Dune 2 somewhere along the line. Dune 2 was released in 1992 and was hailed by others as one of the best games of all time.

The game starts off with a choice of which house you want to join (Atreides, Harkonnen, or Ordos). You start of in a small map where you harvest a set number of credits worth of spice. The second mission is similar with a larger amount of spice that needs to be harvested. After that, it’s simply a case of defeating the enemies with increasingly powerful weapons as you take over the planet Arrakis.

One of the positive aspects of this game is that it isn’t just consisting of harvesting for credits and taking out your enemy. You’ll also have to contend with sand worms that roam the sandy area’s of the map from time to time.

Another positive aspect is that different houses will eventually have different vehicles that are attributed to their house. This helps make the dame dynamic.

A pitfall of this game is the fact that you can only select one unit at a time. This means that if you are carefully sending a whole bunch of units to the enemy base, a lot of clicking will be involved when coordinating an attack force.

Another negative aspect is that this game only allows a limited number of buildings and units. Supposedly, this ensures that game play doesn’t slow down, but when you are up to the last few levels, this becomes an impediment to what you can do.

The game also suffers from a glitch that causes some of the air units to be stuck in the upper left corner. If you use those units, you can only consider them lost units because retrieving them is pretty much impossible (without tracking down a patch that is).

One aspect I can’t really decide on is the fact that one house (Harkonnen) is a bit overpowering compared to the other houses. Meanwhile, the Ordos is quite weak. One the one hand, you can establish difficulty this way where you have an “easy” house and a “hard” house. On the other hand, this can show that this game isn’t exactly well-balanced.

Graphics for this game is excellent for its time. The faces are quite realistic with the exception of how fast their mouths move when they talk. The graphics in the actual game itself is also well done for a game that is so small in terms of disk size.

Audio is also a very positive feature. The music is extremely well sequenced and the vocal talent is also very well done. Perhaps the only negative part is the fact that explosions are merely white noise and a cymbal hit (although, it may depend on what audio settings you have as well).

Overall, this game lives up to the hype. It’s a very well done game and worth the play.

Overall
Furthest point in game: Beat game as Harkonnen and Atreides, but only got to level seven as Ordos.