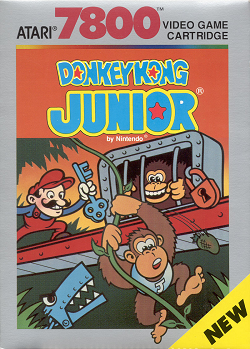 In this review, we climb up onto things while we play the Atari 7800 game Donkey Kong Jr. We find out how well this adventure sequel game plays.

This game was released in 1988. It is seemingly a sequel to the more familiar game, Donkey Kong.

This game features a sort of role reversal. Instead of Donkey Kong throwing objects at Super Mario, Super Mario is now the antagonist. He throws enemies at you. It is up to you to try and free Donkey Kong who is being held hostage (presumably thanks to your actions from the previous game).

If you complete a level, you’ll advance to the next stage.

You can move around and jump. While this is helpful, the most helpful skill is the ability to climb vines and ropes. This allows you to gain access to higher platforms. You just need to watch yourself because if you fall too far, you’ll die.

With the number of enemies, you also need to watch yourself because if you touch any of them or otherwise get attacked, you’ll also die. You have three lives to work with, but with all the danger, that is not much to work with.

You can obtain some extra points by grabbing the fruit. If you happen to squash any enemy as the fruit falls down, you’ll earn even more points.

This game suffers a number of setbacks. One of the setbacks is the difficulty curve. It’s very challenging just to complete the first level. While doable, it requires a good amount of skill and timing. Because of this, the game can be quite short for a lot of players because thy may find themselves dying on the first level a lot.

It is also a very simple game compared to other games that are already on the market. This includes Contra, Gauntlet, and Mega Man. Because of the simplicity, it can be a very shallow gaming experience a well. One thing to keep in mind is the fact that this is a port from a far earlier era. So, while other ports may score higher thanks to age, this game is simply late to the party.

Generally speaking, this game is short, has a high difficulty curve, and is a very late port in a market that is already moving towards the NES. As a result, it is easy to see players going elsewhere to games that better represented the capabilities of home console gaming at the time.

Graphically speaking, this game is almost on par with Atari 5200 games. This includes Frogger II – ThreeeDeep!, Blueprint, and Popeye. As a result this game has very dated graphics and is only something to play if you are nostalgic for a game like this, but want to play it on a newer system for whatever reason. Otherwise, this game is easily overlooked in favor of far superior games available on the market at the time.

The audio is also fairly dated. The music is basic and the sound effects are fairly basic for a game of its time. There’s nothing much that is impressive here.

Overall, this game is generally very outdated for a game of its time. It might be able to compete against Atari 5200 games from about 5 years earlier, but it just can’t compete against the powerhouses floating around at this point in time. The graphics are just as dated and the audio just doesn’t compare to superior games on the NES. This game can easily be overlooked as you wouldn’t be missing much.