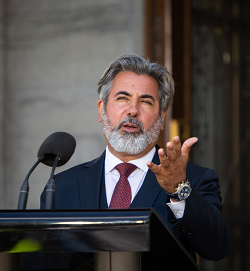 A report is surfacing saying that new Heritage Minister, Pablo Rodriguez, is saying that Bill C-10 is among a number of bills he plans on putting forward very quickly. This confirms our report two days ago which said that Rodriguez is planning to bring back Bill C-10. It also is proving that our predictions back in mid-September are increasingly looking like they were accurate. So, as usual, we are seeing another par for the course “Drew Wilson was right” moment.

The Western Standard carried quotes from the minister:

The Liberals are moving swiftly to bring back a controversial Internet censorship bill, says Blacklock’s Reporter.

Bill C-10 proposed that YouTube videos intended for private viewing be regulated as public broadcasts by the Canadian Radio-Television and Telecommunications Commission.

“We made many promises to table important bills in the first 100 days and that includes the broadcasting bill,” said Rodriguez.

“We need that bill. We have to modernize it.”

So, judging by the report, it looks like the Liberal’s war on the open Internet is going to continue – just like we predicted it would. While some were trying to paint the appointment as a change of pace who would “find more balanced policies related to the Internet and copyright”, that optimism that things will get better will eventually evaporate and we’ll go back to the same old story of a government only caring about carpet bombing the open Internet. At least for us, it took a mere two days to get confirmation of this.