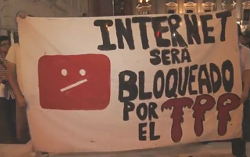 News has surfaced that talks to resurrect the infamous Trans-Pacific Partnership (TPP) will take place this weekend.

In recent weeks, there have been some movement in resurrecting the TPP. The TPP is a so-called “trade” agreement that would, among other things, crack down on human and digital rights. Now, news is surfacing that a meeting among all remaining 11 nations will take place this weekend. From the Globe and Mail:

Japan and other remaining members of the Trans Pacific Partnership will this weekend decide how to revive the trade agreement ditched by U.S. President Donald Trump.

Their trade ministers will talk on the sidelines of an Asia-Pacific Economic Co-operation (APEC) meeting in Hanoi, where newly appointed U.S. trade representative Robert Lighthizer is also due to give more detail of Washington’s trade plans.

Support has built among the so-called TPP-11 for pushing ahead without the United States, although trade within the smaller block is only a quarter of that between the original 12 members, according to the most recent data.

The report also points out that some countries still remain reluctant to jump aboard this. With the US gone, many of what the countries perceive as incentives have vanished. We’ve known about this point for quite some time, but also note that this isn’t stopping supporters from trying. After all, some supporters are seemingly trying to build the perception of momentum for this agreement.

Last week, New Zealand, out of the blue, ratified the agreement. At the time, we didn’t know why or what the purpose of ratification was. Later, it became more clear that this is part of a larger plot to resurrect the agreement. More details emerged that the goal is to push for the completion of “TPP 11” by the end of the year.

Knowing all of this, the meeting that’s supposed to take place this weekend could be seen as a litmus test. A key question here being, will other countries go along with this plot? There are things to consider here.

Citizens from every country that is part of this agreement have given considerable push back against the agreement. New Zealand has seen massive demonstrations, Chile has seen them, Japan has seen considerable protests, and so have Canada. In fact, we aren’t aware of any country that hasn’t seen demonstrations from the local population whose government is part of the agreement. So, every country will have to contend with the fact that this agreement is politically unpopular.

The other thing to consider is, of course, the lack of the US being in the agreement. Are all of these other countries willing to risk so much political capital over what, at best, is seen as leftover scraps? In countries like New Zealand and Japan, the answer is clearly “yes”, but what about other countries? The answer there could vary.

In some respects, this meeting could be a make it or break it moment. If these countries enter the meeting and come out with nothing, that could spell major problems for the survival of the agreement. If countries can’t even get on board with the concept of resurrecting this agreement, what are the chances that the major differences will be patched over? What about actual implementation?

It’s unlikely that the agreement will be fully dead, but it puts into question, at minimum, the tight time table of implementation by the end of the year into question. You can’t hope to fly half way around the world when the plane can’t even make if off the tarmac.

On the other hand, if all 11 countries jump on board during these meetings, then that gives civilians much greater reason to be concerned. The TPP 11 would be basically where the TPP was during the negotiation phase. With the US out of the way, the risk becomes much greater that the TPP 11 will become reality.

So, the question is, could this meeting be the precursor to a much larger civil rights battle? While possible, we still don’t know. What we do know is that we could be seeing a defining moment in the history of the TPP.