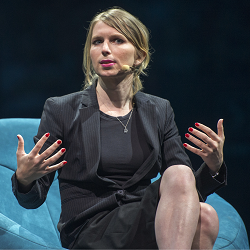 Whistle-blower, Chelsea Manning, is finally free from prison. Now, the US government is attempting to haul her to a second grand jury.

It’s been a long road for the whistle-blower. In 2010, Wikileaks posted a trove of US diplomatic cables. Those cables exposed the US governments meddling in the affairs in other countries. In 2011, one of my reports detailed a few cables not only showing the US trying to encourage New Zealand to adopt the notorious three strikes law, but also a full cost breakdown of pressuring the government to adopt the laws. The revelations in the cables – especially in that incident – allowed citizens to have a better understanding of who was lobbying for those notorious copyright laws.

Also in 2010, an additional trove of data was published by Wikileaks also posted the Afghan War Logs and the Iraq War Logs. One of the most famous disclosure was the “collateral murder” video which showed a US pilot opening fire on unarmed journalists on the ground. Those disclosures fueled public discourse in the US over the role that country has in those countries.

After considerable investigation by authorities, then Bradley Manning was exposed as the whistle-blower. Having suffered from political embarrassment, the US government sought to make an example out of him. He was arrested, held in solitary confinement and tortured. At the time, Manning faced a grand jury hearing.

During the prison sentence, Manning became Chelsea Manning. Having spent so many years in prison, Manning is now freed from prison thanks to the grand jury panel expiring. Unfortunately, it seems that Manning is not out of the foods by any means yet. According to NPR, the US government isn’t done with her yet. They are seeking a second grand jury panel. From the report:

Manning was released Thursday afternoon, after the grand jury’s term expired — but the U.S. Attorney’s Office in the Eastern District of Virginia already has subpoenaed her to appear before a new grand jury panel, according to a tweet from Manning’s account.

In a statement issued the day before she was taken into custody by U.S. marshals, Manning described prosecutors’ questions to her: “All of the substantive questions pertained to my disclosures of information to the public in 2010 — answers I provided in extensive testimony, during my court-martial in 2013.”

Instead of answering those questions, Manning said, she told the court that she objected to them and would not reply on the grounds that they violated her “First, Fourth, and Sixth Amendment, and other statutory rights.”

Manning was freed from a military prison in 2017, after former President Barack Obama reduced what had been a 35-year prison term to a sentence of about seven years shortly before he left office.

Manning has also released a video not only showing the moment of her release outside of prison, but also a statement on this ordeal as well. The statement also covers her view of prisons as well as where things go from here from her perspective:

So, while her fight is far from over, she has, at least, been released from prison for the time being. This likely marks the end of one chapter in her saga and the start of another.