After the results of the vote made news, more details are emerging about how the vote shaped up.

After a fierce and overwhelming campaign to put a stop to article 11 and article 13, European MEP’s yesterday voted to reject the laws. The outcome was met with jubilation from a broad spectrum of Europeans. Momentum shifted from foreign multinational corporations back into the hands of Europeans at a critical point in time in the legislative process.

The question some may have at this point is how the vote broke down in the end. Who voted in favour of the link tax and censorship machine? Who put a stop to it? Pirate Party MEP Julia Reda has posted an infographic on the actual vote. Here’s the picture: 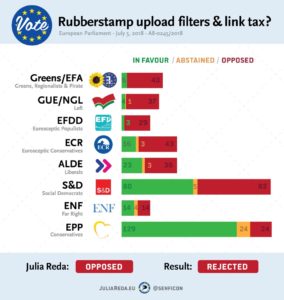 Article 11 would have forced publishers to pay a license for the privilege of linking to content. Article 13 would have forced websites to install internet filters that block all copyright infringing material – technology that adequately does this, of course, does not exist. Article 11 is described as the link tax while article 13 is often described as an upload filter or the censorship machine.

Negotiations surrounding the legislation is schedules to take place in September.