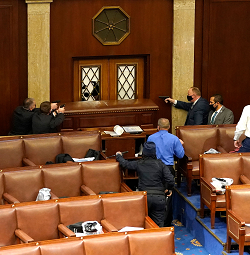 1 year ago, Trump supporters launched a terrorist attack on the US Capitol buildings. American’s are looking into how to move forward.

1 year ago, we witnessed what felt like a “world stood still” moment. Trump supporters, egged on by Trump and his team, launched a terrorist attack on the centre of American democracy. The moment was both captured by media in the distance and recorded in real time by Trump supporters themselves.

One year on, there are many questions about the event that unfolded. One unnerving question is: was that the peak of Republican fuelled division in the country or is that just a preview of things to come? That question likely sourced to the fact that midterms are coming up and the idea that Trump might run again to once again plunge the country into death, destruction, and chaos.

Another question is this: are there lessons to be learned from this and is America learning them or simply doomed to repeat mistakes made in the past? This obviously is a news site that covers technology, so we decided to touch on this question.

In 2018, the very election of impeached former president, Donald Trump, was wrapped in controversy for a number of reasons. One scandal involved the now-defunct company, Cambridge Analytica. While the media had been blaming social media for disinformation for years even at that time, that particular scandal really helped bring this issue to the forefront. For the media, something had to be done to “reign in” Big Tech.

Complicating matters is the fact that Big Tech isn’t exactly a shining beacon of light. Facebook has had numerous scandals including successive data breaches with an eye-popping number of victims. Amazon has long had major concerns about workplace safety as well as legally problematic union busting efforts. There are issues with how much power the likes of Google wields in the online advertising world, leaving some websites unable to move to a competing service simply due to a lack of viable alternatives. Then there are competition issues across the board as well.

So, it’s not as though it is necessarily wrong to say that something needs to be fixed. In fact, there are plenty of viable criticisms towards Big Tech. The problem is, how does society solve these problems?

Unfortunately, the media has been doing society no favours. Traditional broadcasters have long railed against social media for the spread of disinformation. In their view, the solution is, what amounts to be, eliminating free speech online. There are plenty of angles to this as well. One popular way in the US is to repeal Section 230 in various creative ways. In Canada, it’s to reform the Broadcasting Act through Bill C-10 as a way to redirect traffic to themselves – all that under the false guise of “levelling the playing field”. The UK has a forthcoming Online Safety Bill.

Yet, for all the whining about disinformation and misinformation online, traditional media outlets have, themselves, been pushing misinformation and propaganda meant to fuel their interests ahead of everyone else. After all, the media is less than thrilled that people are online publishing news and breaking stories better than them. Ultimately, the evidence points to the fact that the media is much more concerned about eliminating all perceived competition from their space more than anything else.

As a result, the debate has drifting further and further away from how we solve critical problems that caused the January 6th attack in the first place. In a sense, it is ironic that the very platforms that traditionally rails against did more on this file than the powers that be. Twitter blocked Trump (even making the ban permanent), Shopify and Facebook also banned Trump. Several Trump supporters wound up being purged from Twitter.

At the same time, one year on, while many had hoped that Trump himself would have been brought to justice. Trump is still a free man, enjoying his ego stroking time at Mar-a-Lago while ignoring various legal challenges and demands. Several of his supporters were, in fact, arrested and handed prison sentences (rightfully so), it seems that the smaller players are the only ones experiencing consequences of any kind. What’s more is that the government, despite all that happened, failed twice to remove Trump from office. While the processes are ongoing, consequences from those at the top still seem like, at best, a distant thing. For some, Trump might never get to see any kind of consequence from his actions.

Perhaps all of this is just symptomatic of much larger issues. Here we are, one year later and still unsure about the steps of moving forward. Sure, the rhetoric did die down somewhat since January 6th, but some are worried that we will be heading straight back into the Trump era insanity all over again. The answers were never going to be easy, yet it seems like the powers that be were simply content that Trump is out of office and that is what mattered. Yet, the problems persist. There are still militant Republican’s ready to cause the same problems as before. As a result, it just felt like the solution employed was to largely sweep the whole thing under the rug and hope it doesn’t come back.

So, it is probably unsurprising that there are American’s who are seeing this one year anniversary, seeing what could happen in the mid-terms and, worse, what could happen during the next general election. Honestly, who could blame them for being worried? It’s not going to be easy watching what remnants of sanity still exist get potentially blown away in the wind like specks of dust and sand, after all.

What’s worse is someone with empathy looking at this from the outside. Many American’s may feel powerless to change America’s course, but at the very least, American’s do, to varying degrees, have the right to vote. Any non-American watching things unfold outside of the country? We have even less sway. It may be easy to say that, well, this is America’s problem and American’s are the only ones who can solve it. To a degree, that may very well be true. The problem here is that if America ends up going full crazy, the consequences will very likely splash across the border.

Examples of this include Section 230, ICANN, the many servers, hosts, domain names, and infrastructure, the numerous platforms and major websites, and potential sway on how other countries ultimately run their parts of the Internet. What if Section 230 gets repealed? What if a President decides to shut down a web hosting company just because one website had someone post unflattering comments on their website? Us people looking in from the outside may not have much sway, but we would experience some of that collateral damage in the process. With the way other countries are run these days, chances are, mitigating that potential collateral damage will be reactive policies rather than pro-active ones.

In an ideal world, by now, we would be talking about how January 6 was one particularly crazy time in America’s history, but the healing from the damage began and America took steps to make themselves better from the experience. Sadly, the signs that something like that has happened is few and far between today. If the fears about the future are justified, the consequences will be felt by many, not just those living in the US.