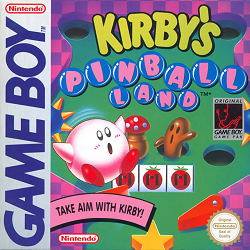 In this review, we rack up some points in a pinball game Kirby’s Pinball Land. We find out how this offshoot Game Boy game plays and if it’s a worthy entry to the series.

This game was released in 1993 and is one of the many offshoot games from the Kirby series. Already, we’ve played the original Kirby’s Dream Land game and found it to be pretty good. We also reviewed the NES game Kirby’s Adventure and thoroughly enjoyed that game. Additionally, we played Kirby’s Dream Land 2 and found that game to be pretty solid. Keeping with the series, we also reviewed Kirby’s Dream Course and found it to be another enjoyable game. Suffice to say, we found a lot of entertainment value to be had in the series so far.

When we saw the title of Kirby’s Pinball Land, we were a bit skeptical. Yes, Kirby can form a ball, but the concept of putting him into a Pinball game could have been very hit or miss.

We got quite worried when we read about the concept. Essentially, it is a pinball game complete with baddies, warp stars, and bosses to fight. Hitting various enemies can produce many different results. At minimum, you get some additional points. In some cases, you can obtain letters by hitting certain enemies repeatedly. Other times, you can knock enemies back as you complete objectives to accesss the boss fights.

In addition to this, you can obtain health bottles which are obtained through the inner lower lanes of each screen. If you trip one side, you can put a bottle on the outer lane. This prevents Kirby from draining through these lanes. If you get a tomato, you can get it to appear right in the middle of the flippers. This can help you prevent Kirby from draining from strange angles.

This game features multiple levels. There is the bottom level which is probably the most precarious level. your objective on this level is typically to try to either spell out certain words to move up to the next level, or to hit Kirby with the flipper at just the right angle to access the next level.

The second level generally contains various goodies such as a slow machine or a warp star. If you hit the warp star here, you get access to a bonus level. One such bonus level would be a sort of soccer and pinball game in one where you try and score on the octopus baddie. Each goal earns you an increasingly larger amount of points. You generally have a time limit. Once the time is up, the flippers become disabled and Kirby will eventually hit the warp star to warp back to the second level again.

The third level is generally the top level where you are presented with some kind of objective. If you complete that objective, you’ll obtain access to a warp star. If you manage to hit the warp star, then you warp up to the boss level. Each boss level hit nets you bonus points. Unfortunately, if Kirby is drained, then you warp back to the top level to try and once again complete that objective. The curious thing about the boss level is the fact that it wraps horizontally. If you fly off into the left hand side of the screen, you’ll re-emerge from the right hand side of the screen in some of these levels. This can be used to your advantage if you have this ability.

If Kirby is drained through the bottom level, then it’s not necessarily game over. However, you are dangerously close to using one of your three free lives. You have to time a jump to shoot Kirby back through the small hole. Failing to time it right means you lose a life. Each time you drain Kirby, the platform gets smaller and smaller. Naturally, this also means it gets progressively more difficult to re-feed Kirby back into the table. If you lose all three lives, then it’s definitely game over.

There are three tables to choose from: Wispy, Kracko, and Poppy. Each table has its own set of bosses, bonus levels, objectives and features. We know for sure that for every 500,000 points on Poppy, the game pauses and you get a congratulations screen. It wouldn’t surprise us if it is like this on other tables, but we couldn’t confirm this.

Now, if the act of describing the game makes you skeptical, believe us, we were rather skeptical ourselves. In fact, when we started this game, we were unsure if we could continue after the first play. Still, we typically forge ahead and try to give each game a chance on the off chance that it takes a bit to get into. In this case, we were correct. It can be frustrating and seemingly ridiculous to play at first, but if you give this game a chance, this one surprisingly grows on you over time. Once you figure out the basics, this becomes a rather enjoyable experience.

Graphically, this game is detailed, but moves so quickly, the hardware sometimes has a hard time keeping up with the movement. This means that it’s hard to see Kirby at times due to the limited refresh rate. Besides the issue with frame rate, the graphics are otherwise quite solid.

The audio worked quite nicely here. The music was nicely done. The sound effects all worked out quite well too. I really found nothing to complain about here.

Overall, this game was a surprisingly creative take on the Kirby franchise. While it may take a bit to actually enjoy, once you get into how the game works, this game can be quite enjoyable. The game may move a bit too quick for the refresh rate of the Game Boy hardware, but that is pretty much where my criticism ends with graphics. The audio was quite solid as it brought back many of the enjoyable sounds that made previous games work. Definitely worth playing if you have a little patience.