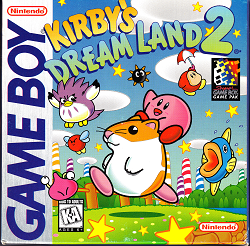 In this review, we try to copy the fun with the adventure Game Boy game Kirby’s Dream Land 2. We find out if this game is worth another play.

This game was released in 1995 and is a sequel to Kirby’s Adventure. Also in the series, we reviewed the original Kirby’s Dream Land and Kirby’s Dream Course. Interestingly enough, this is the 6th game made in the franchise.

There’s not much plot offered in the game itself, but there is the constant antagonist King Dedede involved along with mysterious dark beings.

Plenty of stuff is making a return in this game. Kirby’s ability to copy enemy attacks is one element that I was happy to see return. While there are numerous enemies that can’t be copied, there are still plenty of enemies that can still be copied.

What is new are the three animal friends that accompany Kirby along the way. Typically, they have to be rescued by defeating a mini-boss, but you can get either a fish, a hamster, or an owl. Each friend has their own characteristics that helps Kirby, but the biggest boost is the fact that they have their own health meter. If you lose all of your health while with an animal, then the animal friend will disappear, leaving Kirby with his own identical health meter.

The added bonus of these animal friends is the fact that each of your abilities have their own effects. So, take every ability found in the game and multiply it by four and you get all of the abilities in the game. Plenty of ways to mix and match abilities to say the least.

Along the way, Kirby can collect the standard range of pickups including the health drink (restores some health), the tomato (restores all health), and the 1u (which grants Kirby a free life). What is new are the ministars that can be collected along the way. If Kirby collects 7 of these starts, you will be awarded a free life. i thought this was definitely an interesting addition to the game.

What’s also seemingly new are the special blocks that can only be destroyed by a certain ability. Typically, these blocks guard doors, or, more importantly, special items. Each island has one of these special items and helps contribute to your total completion percentage.

In total, there are 7 islands you must explore. You only have access to one island in the beginning. The only way to unlock the remaining world is to beat the previous island in a linear sequence. to beat an island, you must beat every level one at a time, then defeat the boss level (a door denoted by the skull). There’s a different number of levels in each island ranging from 3 levels all the way up to 7 (excluding the boss level of course).

At the end of each level is a minigame. The idea is that you fall down onto a springy cloud. You have to time the jump correctly in order to obtain the most number of items available. The first few levels are simply enemies that award a small handful of points. However, as you go higher, you’ll get gradually better and better items like a ministar, tomato, and the grand prize for the best jumps possible, a free life.

The good parts about this game include the length. I thought there was plenty of levels and lots to explore. The difficulty curve was also nicely done. The game didn’t ramp up the difficulty too badly until the very end where one level ended up being a memory game on which path to take in an autoscrolling level.

Some people apparently complained that there were too many similarities from this game to the last one, but I wasn’t particularly bothered by this. What I wasn’t a huge fan of was the animal friend system. It just seemed to add an unnecessary layer of complexity to the game. Half the time, it made the game more difficult than necessary. If the game was more in line with a Donkey Kong game where animals are there to help, but only have one set of abilities, then I would probably be satisfied by the system. As it stands in the game, it just seems a bit out of place for me.

Graphically, this game was quite well done. Everything was nicely detailed, but kept in mind certain limitations of the handheld system. A very solid game in this department.

The sound effects worked quite well. The music was also pretty good as well. While not the most amazing music I’ve heard from the Gameboy, it was still a fairly solid effort.

So, overall, this game was a pretty good play. The difficulty curve was nicely done. The adventure elements in this game worked well in that it was possible to either take a thorough approach or simply try and complete the game. This allowed for players to play this game in a small number of ways which is good to see. I wasn’t a huge fan of the animal system, but it was interesting to try it anyway. The graphics were nicely done and the audio was pretty good as well. Definitely something worth tinkering with.

Overall
furthest point in game: Completed the game with 80%.