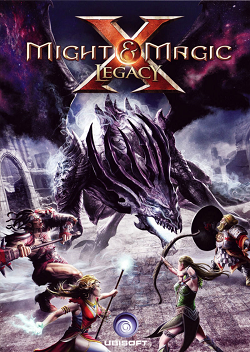 DRM is once again destroying what people legally want to enjoy. This time, Might & Magic X: Legacy players are the latest victims.

Digital Rights Management (DRM) has, for decades, has been well known to be the best example of digital snake oil. It’s hard to really think of something that delivers exactly nothing all the while causing major problems in the process. The stated goal of the technology is to prevent piracy. That goal, to this day, has never been successful as pretty much every DRM we’ve ever heard of has been cracked – frequently within hours of a release and sometimes even days before an official release. Thanks to DRM, pirated products are frequently superior products to the officially released products. This thanks to official servers going down or the DRM finding ways of breaking the legal product. Those problems are rarely seen when the product’s DRM has been cracked.

So, we are learning about yet another instance where the legal product has been broken thanks to DRM. Ubisoft, the makers of Might & Magic X: Legacy, apparently decided to turn off their servers thinking that it’s too much effort to maintain at this stage. As anyone who plays the game knows, you can’t get past Act 1 if the game can’t verify the games legitimacy. That is a huge portion of the game getting locked off because there are four acts in this game (5 if you count the DLC). How do we know this? Might and Magic X: Legacy is one of a number of games we previewed. In this case, we previewed this game back in May.

Even when the servers were running, the DRM of this game was a huge pain if you were like us and bought it off of Steam. If you try and run the game straight out of the executable, the game will fail to launch. This is because this version requires the DRM of two separate pieces of software to run. So, you actually needed to do some troubleshooting and tech support just to get the game running in the first place. For us, the solution was to rummage through the game files to find the Ubisoft store launcher, manually launch the launcher, create an account through Ubisoft, then launch Steam and launch the game. Luckily, this only needed to happen once, but the DRM was already breaking the game even before the servers were shut down.

Last month, Ubisoft decided to end online support for a bunch of older games, but in doing so also brought down the DRM servers for Might and Magic X – Legacy, meaning players couldn’t access the game’s single-player content or DLC.

As Eurogamer reports, fans were not happy, having to cobble together an unofficial workaround to be able to continue playing past a certain point in the single-player. But instead of Ubisoft taking the intervening weeks to release something official to fix this, or reversing their original move to shut down the game’s DRM servers, they’ve decided to do something else.

They have simply removed the game for sale on Steam. If you visit the game’s Steam page now, you’re greeted with the message:

Notice: At the request of the publisher, Might & Magic X – Legacy is no longer available for sale on Steam.

The DLC, as pointed out in many sources, are completely inaccessible. This is because in order to access the DLC, you have to have completed the main story of the game first. You’ll be permitted to roam around for a bit before the game automatically triggers a cut scene that warps the players to the 5th act (the DLC). So, if you can’t get past Act 1, then the other acts and the DLC cannot be played at all. So, this server shut down breaks not only the main game, but also the DLC in the process because you simply do not have access to it.

Now, if you are having a heavy dose of FOMO (Fear of Missing Out) because of this news, we might be able to soften the blow. We have actually reviewed the entire Might & Magic series. Out of the 10 games, Might and Magic X: Legacy is the third worst game out of the ten games in this series. This is coming from an avid fan of the series. The best game in the whole series continues to be Might and Magic VI: Mandate of Heaven. This was way back when the company, 3DO, was still making the game series. Ubisoft took over the series starting with the tenth instalment. While we were playing, it really did show that continuing where 3DO left off was a very low priority. It was like the developers more or less skimmed through some notes about what the previous games were like and knocked something together and hoped that the name would simply sell the game. That was the impression I got while playing through this one.

Still, good game or not, that sidesteps the issue that DRM has brought on this game. Players aren’t deciding to play this game based on whether or not they would actively choose to buy and play this one. Instead, players are basically barred from playing this game legally because of DRM. If Ubisoft actually cared about this game, they would have known long before the decision to shut down the servers to fix the issue of the game locking legitimate customers out of 80% of the game because of the server going offline. Instead, the company just decided to shut down the server one day, breaking the game in the process. Nothing about this is a good decision by any means.

Supposedly, Ubisoft pulled the game from the Steam store so they could investigate a way of fixing this issue. Really, the better decision would have been to reactivate the servers, offer a notice that the server support is coming to an end soon, then work on a patch to allow players to play single player mode. Once the patch is released, see if there are any issues that arise from the patch, then shut down the server afterwards once it is established that the patch works fine.

It remains to be seen if Ubisoft will actually fix this issue in the first place, though.