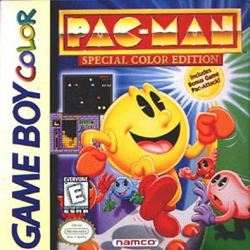 In this review, we chomp on more pellets in the Game boy Color game Pac-Man: Special Color Edition. We find out how well this survival puzzle game plays.

This game was released in 1999. We have a fair bit of familiarity with this franchise. Previously, we reviewed the game Pac-Man on the Game Boy. That game got a fairly mediocre score. We also tried Pac Man on the Atari 2600. That version failed to impress. Meanwhile, the 5200 version got an excellent score.

Another spinoff game we tried was Pac Man 2 – The New Adventures. It simply failed to impress, though.

Today, we thought we’d try our hand at another game featuring the pellet munching hero.

This game features two different games. The first game is the classic Pac Man game as seen in the arcade version. The other game is Pac Attack. While we are aware of earlier versions of Pac Attack, this ends up being our first review of that game.

Since the original Pac Man is so much like the Atari 5200 version, we will focus our review on the differences between the two versions.

The game largely retains everything found in the previous version. Unfortunately, because of screen limitations, the game is forced to contain a scroll feature. In short, the screen shifts as you move about the maze. This workaround has a long history of having varying degrees of success that we’ve seen so far. In this case, this version has a very good implementation of this. You don’t lose much gameplay because of this limitation.

The only real problem you face is if you accidentally leave a pellet or two randomly somewhere. In that case, you may be forced to move about the maze to find it. We didn’t run into this because we took a thorough approach to completing levels, but nevertheless, can see this happening for some players.

Beyond that, this game is still the same old Pac Man game that made some earlier versions a huge hit. Even the graphics and sound is largely the same save for some added reverb to the dying sequence.

Overall, the only technical thing holding the game back is the limited screen space. It is very well implemented here, so it doesn’t hold the game back too much. By the standards of the time, the gameplay may seem short for many players. While it can be rather addicting for a while, it’s easy to have your fill of this game in the matter of an hour or so. As a result, even though it’s portable, it’s still a limited game. The graphics are a little dated and so is the audio.

Pac Attack is an entirely different game. The best way to describe it is that it takes the concepts of Tetris and the original Pac Man and combines it into one game.

In the space, you manipulate falling pieces. Every falling piece is shapes like an “L” shape. More accurately, every piece is a 2×2 block with one piece removed. Though there are exceptions to this rule, the vast majority of the game has you working with these pieces.

Within the normal pieces themselves, there are three possible elements in them: a solid block, a red ghost, or a Pac Man. The solid pieces operate like just regular blocks. If you complete a row of it, then the whole row disappears.

Meanwhile, the ghosts operate like blocking pieces. If you complete a line of blocks with one ghost in the way, the ghost will prevent the line from disappearing. This can be rather problematic if you can imagine.

The third possible item you can get in the piece is the Pac Man. The Pac Man item will cause all of the ghosts to turn blue and flash white. Once placed, the Pac Man will move left and right throughout the screen and eat up any ghosts in its way. If the Pac Man runs into a dead end, then it disappears.

In normal mode, starting at the medium difficulty, every ghost a Pac Man eats will be added to the star meter. Once the star meter fills, a special 1×1 block will begin to fall. Once the block lands, the block will clear out all ghosts in the field from the line it lands on and below. This is very useful for clearing out obstacles you can’t really get at normally.

One thing to note is how pieces react to gravity. If you place a piece on something where spaces will be created below it, the blocks floating over the space will fall down and fill that space. The same holds true when ghosts are eliminated and they create a space above. The second the Pac Man dies, gravity will take over and allow every piece to fall.

There is an alternate mode of play available in this game: puzzle mode. This game operates a lot like the normal mode except that the goal is to eliminate every ghost on the board. The challenge is that there are a limited number of Pac Man’s available. If you run out of Pac Man’s or you die the normal way, then it is game over.

The controls are a bit different in puzzle mode. One button will allow you to rotate the pieces while the other will change the direction of the Pac Man if you have a Pac Man in your piece. The direction of Pac Man can make a huge difference as it determines which direction he will turn first once he hits an area with “ground”.

The star meter is active in every difficulty except easy.

What’s more is that there is one set of scores for the hall of fame. It is set in such a way that simply attempting the hyper difficulty gives you enough points to top earn the top score by a long shot.

This is my first point of criticism. Most games by now at least have separate hall of fame’s for different difficulties. In rare instances, there is a combined hall of fame such as what is found in Paperboy. In this game, such a thing simply doesn’t exist. So, it kind of defeats the purpose of attempting to accomplish anything in certain difficulties when you are unlikely going to top your 30 second round on the hyper difficulty.

Another point of criticism I have is the fact that the fall speed changes way too quickly. You could be on the easy setting and struggling to keep up with the pieces. Meanwhile, on the hyper difficulty, you start off with a fall speed only moderately difficult. I’m not sure if the difficulty more or less loops every 10 levels, but the difficulty spikes are likely going to be a turn-off to many players. It makes new players lose early. Meanwhile, those with more experience in puzzle games will wonder what the point of the difficulties are when all four of them become challenging after a few minutes of play. It doesn’t really make a whole lot of sense.

Additionally, the game can be quite repetitive after a while. While there is a certain degree of novelty to the game at first, the novelty will gradually wane and all you are left with is a rather repetitive game.

A further complaint is the differences in controls between puzzle and original. The game would have been better off if both modes had the same controls. Ideally, stick with the controls found in puzzle mode because it gives players more options. Why there has to be two sets of controls for two different modes that only have a few differences otherwise is beyond me.

Probably one of the only positives that I can come up with in this game is that it is fairly easy to learn. All you have to do is play a round or two in normal and then play around a little in puzzle and you can form strategies that will help you survive longer in the game.

Generally speaking, this is one of those games that makes you think that this is a game that sounded great on paper, but didn’t work out on execution. After all, it does sound like an interesting concept to combine Tetris and Pacman into one interesting hybrid game. Unfortunately, when it came to implementing this idea, the concept seemingly fell flat on its face. As a result, you get a messy game filled with flaws in the gameplay itself. The sporadic difficulty can lose a lot of players, the alternate controls for the different modes makes little sense, and the repetitive play did this game no favors. So, not the greatest game out there.

Graphically speaking, there are a few interesting effects thrown in with this game. The flashing ghosts can help give this game a little bit of extra flash. The smooth animation of the Pac Man object is pretty well done. Unfortunately, some of the other graphics are pretty plain.

The audio isn’t the greatest. No matter what, you have the same music playing in the game. You have a general track for normal play and a secondary track for the panic portion (when the play field gets high). While this isn’t bad, it would have been nice to have more tracks. Some of the sound effects are OK, but nothing huge. So, a little disappointing here.

Overall, this game sounds great on paper, but falls short on execution. The repetitive play, spikes in difficulty, and senseless scoring methods all work against this game. I tried to enjoy this game, but I simply couldn’t find much of a fun factor here. It is more than possible to figure this game out, but that’s about all it has going for it. The graphics have a bit of flash with the effects, but can be pretty plain. The audio is, unfortunately, repetitive and basic. Not the greatest game in the world.