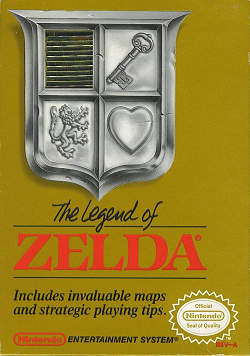 In this review, we return to the land of Hyrule as we play the first action adventure game in the franchise, The Legend of Zelda as seen on the NES.

This game was released in 1986 and would kick off a major franchise that continues to this day. We’ve already reviewed the interesting side scrolling sequel, Zelda II – Adventure of Link and gave it a great rating.

You play Link. Gannon has kidnapped Zelda and it is up to you to re-assemble the Tri-Force, defeat Gannon, rescue the princess and save Hyrule.

You start off with nothing but a small shield. You have to enter the small cave on the first screen to collect a basic sword. This weapon is critical because you won’t be able to easily complete any levels without it.

As you may have noticed, this game has a top-down perspective. With the exception of a few small basements contained within the dungeons, this perspective is consistent throughout the entire game.

Along the way, you’ll encounter numerous enemies. Some throw stones, others burrow under the sand, and some can only be hit when not flying. These are just some of the enemies you’ll encounter as you travel throughout the land of Hyrule (otherwise known as the overworld). While there are a lot of enemies that you can encounter, some will drop useful things once killed. The most common drops are small rupees. Rupees can be spent in stores, gambled away, or spent on arrows (each arrow costs 1 rupee each when fired). Another more common item drop is a single heart. This can replenish your health by 1 heart each. Other items that can be dropped are bombs, a fairy (replenishes a large amount of health), and a clock (freezes time for that screen so you can kill all remaining visible enemies with little resistance).

Along the way, you’ll encounter shops often found in caves. Shopkeepers can sell you items ranging from a single heart to very useful items like rings that reduce damage taken by each hit. What is sold depends on the shop.

The land is quite large and has rivers, oceans, mountains, forests, and even a graveyard. While that may be a great feature to have on the surface, there is the downside of having to figure out where you need to go next which isn’t always clear.

Your goal is generally to complete each dungeon level. The good news is that each dungeon is labelled as “level 1”, “level 2”, etc. The bad news is finding the location of some of these dungeons. Even finding level 1 isn’t exactly easy as it’s located in the middle of a lake. The only real in-game clue you have is seeing the level number appear once you are inside the right dungeon.

While you don’t necessarily have to complete each level in order, it is ideal for those who don’t play that often. You can play the dungeons in any order, however, some can’t be completed (or even started) without an item found in a previous dungeon. One example is the flute which can dry up a particular lake. Once that lake is dried up, a set of stairs is revealed to get to another level.

In each dungeon, there is a set of enemies that you can encounter. This can range from the bats that can be killed by just about anything to the walking armor that can only be damaged from the side and back (no, they are not that easy to kill if they are in bunches). Sometimes, clearing a whole room of enemies is required to either open a sealed door, revealing a special item, or allowing you to access another room via pushing a block.

One of the more highly prized items you can find are keys. These unlock locked doors you may encounter. Most dungeons have just enough keys to unlock all the doors, but you can get a small advantage by buying extra keys from a shop at some point.

Each dungeon contains a map and a compass. If you obtain a map, you’ll be able to see where just about every room is in the dungeon. This can be helpful in testing walls and finding otherwise hidden rooms. Some of these hidden rooms can be accessed via pushing through a wall. Others can be accessed by placing a bomb where a door might be. If you get the level compass, the room where the dungeon boss is located will be revealed on your map (if you got the compass first, then it’ll just be a blinking dot). Obviously, obtaining both will reveal a lot of information to you.

Also found in dungeons are special items. As you may have noticed, you have an “A” slot for your sword. The “B” slot will be what you can use with a secondary item or weapon. These secondary items can be accessed via the pause menu and selected at any time. These secondary items include the candle, boomerang, and the magic wand. Some special items you collect are simply active or activated at certain events. The ring, for example, is always active and can absorb some of the damage you take. Another item is the ladder and will always activate when you encounter a small amount of water or lava (allowing you to traverse it if it’s only one square wide). While some of these critical items may be found in a shop, a vast majority are found in the dungeons.

As mentioned, each dungeon has a level boss. If you defeat that level boss, that boss will drop a heart container. Each heart container expands on the capacity of your health, increasing the chances of your survival. If you manage to defeat the boss, you’ll also gain access to the tri-force room. Collect the tri-force fragment and you’ll not only have your health completely restored, but you’ll also be transported to the entrance of the dungeon on top of it all. Probably one of the most convenient elements in the entire game.

If you manage to complete all the dungeons and get all of the tri-force shards re-assembled, you’ll be able to tackle the final level. If you defeat Ganon in this level, then you’ll be able to rescue the princess and save Hyrule. The added bonus of completing the game? You get to take on the next “story” which is a more difficult version of the game. While we don’t know how many stories are in this game, we do know that entrances to dungeons and shops get moved, and everything is re-done to make your next adventure more difficult. So, if you like challenges, this game has it.

One great thing about this game is the huge amount of content that is found in this game. I’ve played some other games that were released at around this time, and most don’t even come close to what was presented in this game. The large overworld, the large number of dungeons, everything makes this game quite large. Unfortunately, there isn’t always a clear sense of direction and I can find myself wandering Hyrule for hours trying to find the entrance of the next dungeon. Sometimes, I find a dungeon only to discover it’s several levels higher then what I was looking for. If there were in-game hints along the way (more so then what there is now), I think that would have went a long way in solving probably the biggest problem this game has. Because of this problem, you are almost required to have some sort of guide helping you along sooner or later.

Another downside is how quickly the difficulty ramps up. While the first story isn’t too bad, just try making it past 5 levels without running into problems. Every heart container you can find and every advantage you get almost becomes mandatory for you to survive the next dungeon. Even then, nothing is really guaranteed. All it takes is bad luck in one or two wrong rooms and it’s curtains for you. Still, you do have to get through a lot of content before you run into this problem, so it isn’t a huge problem. It’s just that there’s not a whole lot of motivation to really go far into the next story is all.

Beyond getting lost and the difficulty spike, this game has a lot going for it. I thought the items were creative, the level designs were interesting, and the large number of enemies you can encounter great aspects of the game. In fact, this game allows you to upgrade an item or two which I thought was even better. I also like the games ability to use halves. You can step half way across a square. You can have a half a container of health. All this just ramps up the quality of the gameplay in my view.

Graphically speaking, this game was quite well done for a game of its time. There’s plenty of different scenery in the overworld from the rock-faces to the forests to the deserts and mountains. The overworld was quite impressive on this front. The dungeons, however, suffer a bit of simple color pallet swaps. Once can be green, another can be yellow, and one can even be grey. While what is presented was nicely done, the simple color swaps did mean that more emphasis seemed to be reserved for the overworld. The flashing colors of enemies when they take damage, the puff of cloud when they populate an area, and the flashing protagonist when you take damage all worked nicely. The enemy designs were also very well done.

The audio of this game was an interesting thing to rate. On the one hand, the music that is in there is very well done. Some of that music set the tone for future games. The final dungeon was also very nicely done because it’s, well, different. Unfortunately, in the steps leading up to that final dungeon, you are basically presented with either the overworld music, the dungeon music, or silence while in stores and people’s living quarters. After a while, this selection of music is quite limited. It’s actually somewhat refreshing when you die because you are presented with something different at least. A bright spot, for me, in this game, was the sound effects. I liked the ocean waves crashing and the sounds of the boss from the next room. This worked very well in my view. The other sound effects worked quite well too.

So, overall, this game was quite well done. The downsides of this game was the complexity of where critical things are located on Hyrule. It sucked being lost for hours trying to find the next dungeon. The difficulty spike in the second story also held this game back a fair bit, making game play much more limited. The music selection was a little thin part way through the game. Still, those are the few negative points about this game. The vast amount of content was excellent – especially the size of the overworld. The large number of usable items was a great aspect. The fact that you could even upgrade a few items was also a bonus. The large number of enemies was fantastic. The boss and heart container system was great. Once you know where you are going, this is a great game. I would say, if you never played this game before, I would recommend it, but have a guide handy because it can be quite frustrating figuring out where to go next at times.