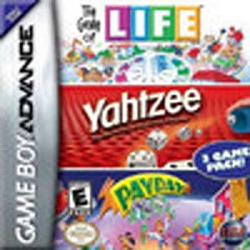 They are board games that many people have heard of before: The Game of Life, Yahtzee, and Payday. All three of these games are also available on the Gameboy Advance. We check out this 3 pack game and see if this is worth checking out.

This particular game was released in 2005 and would be one of a handful of games that actually features multiple games.

One game featured on this game is called “The Game of Life” which is basically the same game as featured on as it’s physical board game counterpart. Players utilize a spinner and move their cars along the various paths that weave around – all of which ultimately end at the retirement area. Players are given a choice to either go through college or go directly into the workforce. If players choose college, they have to pay tuition, but, to my knowledge, have higher salaries along the way through. Every few squares contains a pay day space. Passing through or landing on them will net the player whatever their salary is, reloading their cash reserves on the way through. Players can get married, have kids, and vote along the way through. Also on the way through are opportunities to obtain life cards. These cards can be collected and saved or taken from other players on the way through (depending on what they land on). At the end of the game, these cards are revealed and award players bonus money at the end. There are areas where players lose money along the way. In a sort of anti-social twist, donating to charities or paying money to auction houses for art are all ultimately penalties that hurt your final score. So, you want to avoid making society a better place at all costs in this game (I feel bad just typing that). All players will eventually make their way to the retirement zone. When all players finish their trip through life, their life cards are tallied along with their overall cash total. Whoever obtained the most money wins (great entertainment for your inner greedy capitalist).

The second game we tried out in this 3-pack game is Payday. The board is basically set up like a calendar. You select how many months you want to play (this determines how many times you go through the board before retiring) before playing. Along the way, you can land on deal opportunities where players either purchase or go through an auction process to buy assets. Buying these assets can be an interesting strategy as players can ultimately sell these on other spaces, liquidating them into cash. I would advise buying these early on in the game because, late in the game, these assets won’t count towards your final money score if they aren’t liquidated. Saturday squares are designated lottery days. You can spend a little money and try for winning the lottery (which have much better odds than most of its real life mainstream counterparts). All players on the board can enter and play, so anyone can win whenever any player lands on these squares. Mail squares give you random cards. Some of these cards allow you to take a little money from other players while others are just bills you have to pay at the end of the month. If you go below $0, then you have to take out loans that can be paid off at the end of the month. In the end, the winner is the player with the most cash on hand.

Finally, there is Yahtzee (probably the best game in the pack). This game can be thought of as a sort of 6-sided dice version of 5 card draw poker. It even sports similar terms to poker as well. Players are given a maximum of three rolls per turn. If a player sees what they are after in any roll, they can hold on to those dice and re-roll the rest. After each turn, the player must select one item out of a list of possible point scoring items on the score-card. On the left are what I like to call “burn” categories. If you don’t get a whole lot in your three rolls, you can simply select one of them and try again on your next turn. These categories are however many of one particular side of a die you get. Your total appears to be the value of the die multiplied by how many of that die you got. On the right side of the list are the high scoring categories. These categories include 3 of a kind (three of the same kind of die), 4 of a kind (four of the same kind of die), full house (three of one die and two of another), small straight (four die that count up like 2, 3, 4, and 5), large straight (all five die count up like 2, 3, 4, 5, and 6), chance (whatever you got total for each die – essentially for garbage rolls), and the most elusive Yahtzee category (all five die are the same). My strategy is always tying to get the harder to achieve categories as quickly as possible (the ones that require all five die to fulfill) regardless of the value. Reason for that is if you only have the Yahtzee category left and you don’t get a Yahtzee, you’ll be forced to score it as 0 points total. The only thing I haven’t quite figured out is how to get the bonuses at the bottom of the score card – though given that my main focus is not getting 0 on any of the categories in the first place, this seems to be a more of less moot feature since it’s more than possible to win with no bonus points.

All four games feature the ability to have up to four players. Whether they were human players, computer players or a mixture of both was entirely up to you. Good that they added in some computer player AI.

Graphically, this is a tail of three different games. The graphics for Life were nicely put together. Minimalistic where needed and detailed where good graphics were required. Payday was decent if you’re not looking at the board. The board itself was a bit of a dogs breakfast with bust graphics mashed tightly together – sometimes not very visible. Yahtzee, in the mean time, requires no real graphics at all, so the graphics that were put in were nicely done.

Overall, I felt that Yahtzee really saved this game. I played through Life once and found myself thinking that one could easily just gloss over this game. Payday was an interesting thing to look at on the first play through, but not something that would motivate me to keep playing. Yahtzee, meanwhile, was a fun one as it actually involved trying to manage risk and strategize which categories you want to take and which ones you’ll try and obtain later. Out of all three of these games, Yahtzee was the only one worth playing and getting some entertainment value from.

Since this is a 3-pack game, I’ll divide the scores based on game and total up the average points after.

Beat Life on the first attempt.

Finished 2nd on Payday thanks to one CPU opponent always winning the lotteries, hoarding and managing to sell all the assets before finishing. Never had a chance against that kind of luck.

Was able to finish in all positions in Yahtzee, winning twice.