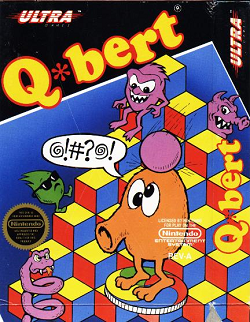 For years, Q-Bert was seen as an icon for retro gaming. While Q-Bert’s image has now faded somewhat from public concious, we take a look at one of the earlier versions of this classic puzzle game and see whether or not it is even worth playing these days anymore.

Released in 1989, this version of Q-Bert would build on the success it has achieved in the arcade version that goes by the same name.

Q-Bert doesn’t really have much of a storyline in the game itself, but the premise is simple – change all of the coloured blocks to the target colour by jumping on them while avoiding enemies along the way. The player has a whole pyramid to change, but changing the whole pyramid will permit the player to advance to the next stage.

Players are given the chance to orientate their controller before the first round, but once the player is satisfied, play can begin. This screen is necessary because the original NES controller only has an arrow pad that goes up, down, left, and right. The game features Q-bert being able to travel strictly in diagonal motions. Ideally, you simply set the controller down somewhere and tilt the controller so that the arrow pad matches the “X” movements featured in this game.

After that, players are shown a brief demonstration on how Q-Bert changes the blocks to a different colour and what the target colour is. Play then begins.

The game is complicated by the fact that a number of different enemies appear on the screen. There are red blobs that appear and travel all the way down the pyramid until they fall right off of it. Players need to avoid these. There is the re-occuring enemy of a purple blob. Once the purple blob reaches the bottom of the pyramid, it turns into the snake enemy Coily. The snake can travel any direction and is always trying to find the quickest rout to attack you.

There is also the enemy with glasses. This enemy lands on squares and turns them either back to the initial coloour or changes the square to an alternative colour. These enemies eventualy fall off the pyramid, but players can touch these enemies in order to kill them instantly, stopping their damage to your progress dead in their tracks.

Q-Bert has a few things that help him. There is the tiny green blob that occasionally makes an appearance. It eventually falls off the pyramid, but unlike other blobs, touching this well stop time for a brief period of time. This can help players flip a few hard to get blocks over to the appropriate colours before enemies have a chance to intervene. Another helpful item featured in this game are the warp pads that appear along the sides of the pyramid randomly. If players jump onto these pads, most of the enemies will disappear. Coily, most of the time, follows Q-Bert until it jumps off, but if Q-Bert makes it to the top of the pyramid before Coily jumps off, Coily will still be there to thwart your efforts.

One element of this game is the fact that this is a one hit kill type of game. If Q-Bert touches an enemy, you lose a life before reappearing on the square you left off on with not a single enemy around. You are given a limited number of free lives and continues, so try and plan your efforts wisely as it is easy to burn through your lives and continues in this game.

There are a few rounds each level, but as the player progresses through the levels, the difficulty increases. At first, the player is simply reverting the colours of cubes by simply touching them once. Later on, it requires two touches to revert the cube to the target colour. After that, it’s possible to refevert the colour back to the original colour if the player touches the cube more than once and, where we managed to get to, it requires two touches to revert the cubes to the target colour, but touching the cube three times means the cube is reverted to the second colour.

Graphically, even though this game gives the impression of a 3D environment, this is one of the most graphically stripped down games we’ve played. The graphics are sufficient to identify most of the basic objects on the field, but there is little else in the graphics department here. While it simplified this game substantially, it also makes the game feel very dated by todays standards. Give other games that have been released in this particular year, I can’t say these graphics were all that great.

Musically, there is merely a theme song, but that’s it. From there, it’s very basic sound effects that depicts when everyone is jumping, if ap layer hits a warp pad, if a player falls off the pyramid, and if the player touches an enemy to name several examples. There isn’t much here that really impresses.

Overall, this game has a very dated feel to it. If you have no problem playing games with retro graphics, this game can be playable, but even then, the playability only lasts for so long before the game becomes dull and repetitive. I think this is one of those games that just doesn’t cut it for today’s gamers.

Furthest point in game: Level 4, round 1.