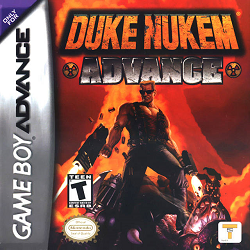 This particular version of Duke Nukem was released in 2002. It follows a unique storyline in that Duke Nukem is working with General Graves to stop an alien invasion.

There are many elements that have been imported to this version from the original Duke Nukem 3D including several enemies and a number of textures.

Also coming into the game from the traditional 3D DOS version was the three colour key card system – a staple in increasing the complexity of the game. Yellow card keys open the yellow locked door, red keys unlock red locked doors, and blue card keys open blue locked doors. One thing that didn’t seem to make it over from the 3D version is a distinct lack of visual representation of what colour key was needed. Instead, players were merely greeted with a message stating if they are missing the necessary card key.

What is new is the inclusion of an objective on some levels. Some levels requires Duke to interact with an object or collect a particular item. If Duke fails to complete the objective in the objective required levels, a message will appear when he attempts to access the exit door saying that the objective needs to be completed first. This is an interesting departure from the 3D version where the only mandatory objective was to work your way to the exit of the level.

A feature that was similar to the N64 version that is brought over to the Advance version is the ability to save “babes”. Unfortunately, this version has a much more linear way of getting Duke to save them. There’s simply a babe at the end of a few end levels. Duke rescues her by running up to her. When that happens, the level ends and the player moves on to the next level. In the N64 version, “Babes” were saved by using the activate button. Frequently, there were several of them in the level and players were encouraged to save them when they are trying to get a high score. This game? Not so much.

Advance also features no real “activate” button. Instead, running up to doors or switches was how one was able to activate them. This was probably due to the limited buttons the Gameboy Advance featured, so it was a hardware limitation.

This game also features a set of difficulty settings before the player even starts. These are very similar to the 3D and N64 versions (which are “Piece of Cake” for easy, “Come Get Some” for medium/easy, “Let’s Rock” for medium/hard, and “Damn I’m Good” for the hardest difficulty). For review purposes, we chickened out and selected the easiest setting so as to be able to quickly see what all this game had to offer in the single player mode.

There are a few new enemies in this version as well. There are “Grey”s which have the ability to both attack you and resurrect enemies that have already been killed. Another new enemy is the weird bug-like creature that crawls around and can stab you up close or lob green goo at you from a distance. Another enemy that is both old and new is the egg. Eggs in the 3D version simply sat there and hatched out a green slime monster to attack you. In the N64 Zero Hour version, eggs simply burst when Duke got near them, knocking out a large portion of your health or simply killing you unless you were sporting a gas mask. In this version, however, the eggs attacked you when you got close. They lobbed green ooze at you. From a distance, though, they were ultimately completely harmless.

Also like previous versions of this game, Duke Nukem Advance features a wide arsenal of weapons with familiar capabilities. There is the pistol (which notably doesn’t fire anywhere near as quickly as other versions, though it does briefly stun an enemy too), a shotgun, a freeze thrower (which, in this version, doesn’t really damage an enemy and fires much more slowly than it’s 3D predecessor, but merely freezes an enemy and gives you the chance to run up to your enemy and kick it into a million pieces. There is also a shrink ray gun which allows you to shrink an enemy and stomp on it after (though, in this version, enemies can still fire back even though they are shrunk, oddly enough), the pipe bomb (which is a little more difficult to use in my opinion), and, of course, the mighty foot for if you’ve run out of ammo.

New weapons include the SM5 (which is your standard machine gun weapon) and an upgraded Lead Cannon (a quadruple barrel shotgun which, I thought, was the best improvement to the arsenal). I thought that these weapons certainly tried to change things up a little. I think the jury is out for me on whether or not this was a good chance or not.

Another feature making a return is the secret area’s. These secret area’s typically hide a small cache of goodies for Duke Nukem to use. At the end of the level, you’ll be given a score of how many you found out of how many there are total. Most levels have one or two secrets, but I seem to recall one level containing a whopping 7 secrets for you to find.

I wasn’t expecting a whole lot of levels when I started playing this game, but, as it turns out, there were 19 levels in all. Impressive for a 3D game on a handheld, though I do note that these levels are a little more linear than most Duke Nukem games.

One thing I was a little disappointed in was the lack of items in the game. Unlike most other Duke Nukem games, this game doesn’t feature things like a portable medkit, gas mask, night vision goggles, or protective boots. The only item that has carried over onto this version was the armour. The armour is available for you to find, but it’s much more Doom style with a 50% armoured jacket and 2% pieces of armour scattered in small collections throughout the level.

Health items do make an appearance. There is the 10% medkit, the 25% medkit, the 5% medkit that can advance your health beyond 100% and the fairly rare nuclear health which adds 100% to your health past the 100% level.

There are no water areas, but there are a few lava pits for you to navigate. Stepping on them reduces you health and armour gradually. In later levels, you certainly don’t want to be wandering around on these as health supplies can get limited.

One feature I wasn’t a big fan of was how the map system was handled. You have Duke’s face as an icon, but otherwise, it’s all just a solid background with a few lines representing walls. After I saw it, I opted not to use it because it didn’t seem like it would be all that helpful.

On a more positive note, there are a few areas that are timed. The rockiness of the screen was a nice touch as you race through an exploding area.

Graphically, this was OK for a handheld game. It can be a little tough to see some things from a distance and sometimes, features of enemies are a little tough to see, but otherwise, the quality doesn’t necessarily get in the way of the overall gameplay a lot. I can forgive the graininess a little given that this is a fully 3D environment, so some things do have to give a little on a device like this.

The music is barely present in the game. There is the main theme, but that’s about it (which was a decent effort at least). The remaining sounds were solely sound effects. While in other versions of Duke Nukem, there’s a variety of grunts and moans when you blast holes in the aliens with your weapons, this simply had the squealing of the pig cops and a simple groan sample for almost every other enemy. Small insects and eggs had a distinct sound, but that’s about it. Ambient sounds were present, but in some areas, they simply flip back and forth from one to the other with only slight adjustments to the volume as you approached a noisy area. There weren’t that many of them, but the alarm horn in the alien ship was a bit out of place considering there was an alien alarm as well. Speech samples were, sadly, more predictable than previous versions of Duke Nukem. Every time you pick up a health pack, you have the “ahh” speech sample. So, if you collect several in a row, you get that sample cutting off and starting, cutting off and starting, then cutting off and playing through if you aren’t collecting even more. I wished it was a little more random then that. the whistling, on the other hand, was reasonably well placed even though it was a little more clustered on a certain level then I thought was necessary. In the end, the audio was passable, but nothing special.

Overall, I thought that this was a somewhat stripped down version of Duke Nukem. I can forgive some of it’s shortcomings (like browsing through weapons requiring more than one button to execute) on hardware limitations, there are elements that could have improved this game as well. The major positive of this game was the surprisingly large number of levels. It took several hours for me to play through the whole game. While the level designs were a little linear for my tastes, it still provided a few quality hours for me. This game is likely worth playing for Duke Nukem fans as well as FPS fans as well. it fulfills the basic requirements of a Duke Nukem game (namely the dirty humour speckled throughout and the “blowing stuff up” parts). For casual gamers, this might be an interesting diversion, but likely a game you just play through once or twice and move on to something else.

Furthest point in game: Beat the game on “Piece of Cake”