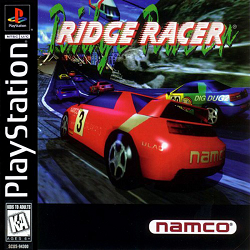 In this review, we hurry to play the racing game Ridge Racer. We find out if this Playstation game if worth playing.

This game was released in 1995 and would be a launch title for the system.

If you are like me, you’ll end up at the start screen without having beaten the loading mini-game. In the menu, you get a few options. One of these options is being able to choose which car you race with. You get a choice of either 3 cars or all 15. Some cars emphasize speed while others emphasize acceleration and turning.

Also found in the menu screen is the option to choose which track to play. These levels are Beginner, Mid-Level, High-Level, and T.T. (Time Trial, presumably). You can pick any of the courses you want to play, but the goal is to win in all 4 modes. The beginner is a simple 2 lap track. The Mid-Level is more or less the same track, but with 3 laps. High-Level is the same track, only with an alternate rout tacked on to the end of the track for added difficulty.

In all three of those first 3 modes, you start in 12th place. With other racers starting further ahead, you need to catch up and ultimately pass every opponent before you complete the race. You also have a time limit, but for half of the races in question, this is barely a factor in the race.

T.T. mode is slightly different. While it would suggest a race against the clock, the truth is, you are playing against an opponent. Beat that other opponent to win the race.

If you win all four races, you’ll get reverse versions of each track. These reverse courses are harder than the previous set and the same rules apply to each track with the exception of T.T. In T.T., the only difference is that you race against 2 opponents instead of 1. Win all four of these additional races and you apparently win the game.

In the races, you start with a countdown. The idea is to rev the engine so when the race starts, your speedometer is as close to the red area as possible, but not within that area. If you get within the red area, then you’ll spin the tires and lose time right out of the gate. For the rest of this race, the goal seems to be to avoid hitting walls (which will reduce speed). If you can take on the course full speed all the way through without rear-ending your opponents, you’ll likely do fine in the race. Of course, this is easier said than done with such tight controls.

Also of note are simulated fish tail spins and power slides. It is possible to execute a powerslide, but it requires timing and a little bit of luck. What you’ll encounter more often is the fish tail likely due to braking around corners. You’ll spin both directions before you start evening out. You’ll also experience a loss of speed once you finish fish-tailing.

The tight controls do take a little bit of getting used to, but the learning curve is generally somewhat shallow at first. They do take some time to master, however.

A big problem I have with this game is the content – or lack thereof. As you’ll quickly notice, there really is only one track with variations to it. This is a very unusual set-up and I don’t recall playing a game that contains a mere 1 track. The game I recall that comes closest in the same era of gaming is Multi-Racing Championship which, at the time, I called three tracks a dismal showing. This has far less.

Because of such an extremely small amount of content, the game barely takes a day to play to get the general gist of it.

So, generally speaking, while controls are interesting, the amount of content is extremely small which causes gameplay to be short-lived.

Graphically, this is where this game stands out. While there were SNES games by this time that had some semblance of 3D (such as Star Fox, Top Gear 3000, and Dirt Trax FX, this game really raised the bar for things to come. This game truly gives a feeling of 3D on a system that seems like it was meant for 3D games. To make things even more interesting, day can shift to night and night can shift to day as you play (not to mention the occasional helicopter flyover for good measure). While this happens seemingly quick, this makes for some very nicely dynamic play. While games like Doom and Ultima: Underworld are 3D games that predate this game, this game did help take 3D gaming to the next level. So, full marks for graphics.

The audio was decent enough. The announcer was OK, though a little overly enthusiastic for my taste. The general sound effects were fine. The rave-style music was OK, but wasn’t exactly huge for this game.

Overall, this game took things to the next level at the time so far as graphics were concerned. Once you get past the graphics, the handling was about one of the only other things to praise about this game. The single track racing and short play really hurt this games chances of making a huge impression on the gameplay front. Even though the challenge and difficulty curve was there, there wasn’t much that can be done with a game with such an abysmal amount of content. Because of this, this game ends up being more of a tech demo than a full-fledged game. Audio was OK if you can stomach that announcer though. Still, I would say this game can be passed over unless the only thing you concern yourself in a game is graphics.