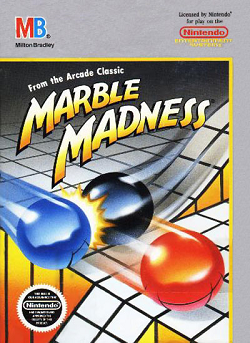 Marble Madness is a marble racing game released on the NES. We take a look at this game and see if this simple idea of an obstacle racing game involving marbles plays out.

This particularly curious game was released in 1989. It’s a fairly straightforward concept of an idea. You simply move a marble through an obstacle course and reach the goal before time runs out.

Players enter the first course which is essentially a beginners training course. Here, players can familiarize themselves with the controls and play around with the maneuverability of the marble they are controlling. There is only a limited amount of time to reach the goal, so it isn’t advisable to simply linger in a particular area for too long.

Once the player(s) complete the course, then the real game begins with the second (and distinctly blue) level. Players times are reset to zero before play begins and they are given a set amount of time to complete this course. If a player completes the course in time, the remaining time is carried on over to the next round and additional time is added for qualifying for the next round. This carries through for the remaining courses.

Along the way, players will encounter a variety of obstacles. This includes the black steel ball which moves around and tries to block your attempts to proceed, a weird green cylinder-type monster that jumps up and swallows you whole if you are going too slow, and green slime that absorb your marble if you run into it. There are also non-moving obstacles which include pipes, jumps over gaps, crevices, bridges, vacuums, catapult’s, disappering floors, ice, swinging hammers, and a whole lot more. Not a bad variety for a game with only 6 courses total.

If a player completes the game, they have the opportunity to enter their name into the hall of fame. It isn’t much of an ending, but an ending nevertheless.

This game also supports two players where both players share the same screen. If one player falls behind, they’ll be articially caught up, but they’ll be taking a time penalty for lagging behind should they fall off the screen.

I found the controls were a bit tricky to get used to, but one could get used to them with a little practice. The game itself, I found, was a little hard to complete, but that might be because the game was also rather short. Still, there was a lot packed in to this short game including a “silly race” where players receive a message that says “Everything you know is wrong” (Weird Al reference?). I thought that this was a nice clever level that really helps in the variety department.

The graphics were very simple, but they were also effective. There really isn’t a whole lot to complain about with this game in this department considering the time it was released. In fact, compared to a number of other games I’ve played in this era, I’d say the graphics were fairly well-done overall.

The audio was a nice highlight in this game. There was a huge variety of music and most of the songs never really got old. The sound effects were quite creative given the technical limitations of the system at the time. No complaints from me in this area as well.

Overall, this is a small, yet fun and challenging game worth checking out. It’s sad that no one really made a direct sequel to this game, but there were similar games produced since then like “One The Ball” and the various Monkey Ball games later produced. So, there were sort of spiritual successors to this game that did well.

Furthest point in game: Beat all of the courses, though not without several failed attempts beforehand.