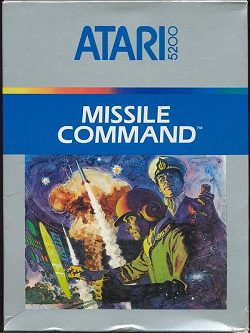 In this review, we check out one of the most well known classic video games of the early 80’s – Missile Command. We give this action/survival game a spin to see if it is still a great game to play today.

The Atari 5200 version of Missile Command was released in 1982 and would be one of the last official releases of the game.

The game is quite simple to understand. You have a hill armed with missiles in the middle of the screen. The objective is to protect the cities as best you can from the onslaught of enemy fire. You have 6 cities to defend. If all 6 cities are destroyed, and you earn no bonus cities at the end of the round, the game is over.

Making matters more interesting is the fact that you have a limited supply of missiles for each round. The supply doesn’t seem to be a big deal at first, but as you advance to later rounds, ammunition becomes a premium.

The kinds of attacks enemies will have are varied. The main weapon is general missiles. These are denoted by lines being drawn in the sky falling straight down. A variation is the missile that eventually splits into a cluster of missiles. These can be avoided if you shoot the missiles early on, but become a problem if you don’t shoot them in time. Another weapon are falling triangle-like bombs that avoid a blast radius. If you shoot a missile in the path of the diamond, the diamond will react by simply moving around the blast radius. The trick is to either shoot it directly or surround it in blast radius’s so that it had nowhere to go.

Additionally, there are planes that fly overhead. These planes will eventually drop more missiles on your cities, so shooting them down before thy have a chance can save you a lot of headaches. Another round spiked object also flies overhead from time to time. Like the plane, it drops more missiles and falling bombs.

At the end of each round, you get a tally of all of the bonus points you earned. The multiplier is displayed at the beginning of each round. You win a 5 point bonus for every missile you don’t use. For every city you save, you gain a 100 points.

For every two rounds you complete, the multiplier increases up to, I believe, 6x. From there, every round simply gives you a 6x bonus multiplier. Points are critical to your survival in later stages because you gain a bonus city for every 10,000 points earned. For each stage you advance, the difficulty ramps up. This is mainly by having enemy missiles fall faster, causing you to test your reflexes more and more until you just can’t keep up with the carpet bombing. Lose all of your cities and earn no bonus cities at the end of the round and the game is over.

Overall, this game can be surprisingly addicting. It’s a simple enough game, but there was plenty of motivation to keep me playing extra rounds to see if I could get any further.

Graphically, this game wasn’t bad for a game released in 1982. Most objects could be clearly seen and easily identifiable (minus the triangle thing of course). the colorful blasts were also a nice treat for the eyes in my opinion as the blasts looked neat in their own psychedelic ways. Even the game over screen was nice and flashy.

There was no music, but the audio was nicely done. The alarm at the beginning of each round was pretty good. The blasts, while all the same, were nicely done. The fizzle sound of your rockets firing were pretty good. So, overall, audio was pretty decent for a game with no music. Not sure how much music is necessarily needed for a game like this though.

Overall, this game was an addicting one. It had a decent enough difficulty curve and the looks and sounds were decent enough for a game on such an old system. If you’re looking for a game that really represents the early 80s well, I would definitely offer this as a recommendation. Great game all around.