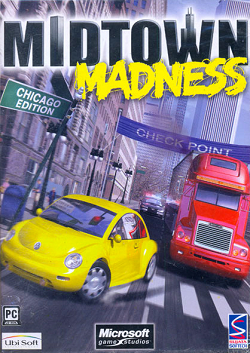 In this review, we check out a racing game called Midtown Madness. We find out if this game did a good job at kicking off the series.

Midtown Madness was released in 1999 and would kick off a small series.

There’s no real plot, but the idea is that you drive like a maniac through the streets of Chicago with a commentator making the odd remark here and there throughout the races.

The game features four modes: Cruise, checkpoint, circuit and blitz. Cruise just allows you to cruise around town. Checkpoint closes off all traffic and pedestrians, blocks off other roads, and keeps the race to just a set of checkpoints, laps, and your opponents. Blitz, on the other hand, pits you against the timer and it’s up to you to cross through the checkpoints and finish by any means necessary. You have to weave in and out of active traffic on top of it all. Checkpoint is a hybrid between blitz and circuit. You race against opponents and race through checkpoints to the finish while avoiding traffic.

Guiding you along the way in the races is a green arrow that points to the next checkpoint. Depending on your mode of racing, you can simply take whatever rout you feel is best to get from one checkpoint to another.

Collisions with objects or other cars (or even buildings for that matter) are inevitable. As you hit other things, your car will take damage. How much damage depends on you cars stats. Gradually, the body starts getting dents and dings and even crunch marks. After that, your wheels start getting wobbly and your car shakes like an off-balanced washing machine at high speeds. If you take enough damage, your race will come to a screeching halt. If you crash your vehicle in circuit, you’ll be assessed a 5 second penalty. In other modes, your race ends entirely.

For the most part, your goal is to achieve the top 3 places in the normal difficulty. Doing so will not only unlock new courses, but also new cars with better performance statistics. You can unlock a Fastback, Roadster, bus, or even a police car. Unlockable cars can definitely aid you in winning more courses.

A major pitfall with this game is the controls. Plenty of publications have said that the controls are simplistic. What I believe is meant by that is that the up arrow is gas, down arrow is breaks, and left and right arrows turn. If that is what is meant by simplistic, then I absolutely agree. If we are discussing vehicle control, that is an entirely different thing. I found vehicles extremely difficult to control. One tap of the arrow key can cause your car to instantly pull a 180 degree turn for some vehicles. Other vehicles will spin 90 degrees and flip on their side. The car will then proceed to skid on its side for a good 20 to 30 seconds down the road until the game finally decides to ease your car back onto your tires again. By the time that happens, all of your opponents have likely sped past you and the race is pretty much over. This is an extremely frustrating element in this game to say the least. To alleviate this a little, sometimes the ultra-realistic maneuver of breaking while turning helps. This can avoid a lot of spinouts and allow you to take more turns, but it doesn’t avoid it all of the time. Because of this, it seems that computer opponents have more turning ability than you as you seemingly require using the full 6 lanes and 2 sidewalks to accomplish a simple 90 degree turn that computer players end up having no problem accomplishing with half the lane space at the same speed.

So, overall, I thought that this game did have some interesting elements, but the turning abilities of the available vehicles really ruined the driving experience for me. Still, I do like the open world style of this game.

Graphically, this game does offer a lot in terms of really bringing Chicago to life. A lot of landmarks and familiar places are found in this game. The racing vehicles look decent enough, but other vehicles seem blocky and archaic for a game of its time – let alone a PC game of its time. The buildings were nicely done and the weather patterns were also pretty decent overall. Unfortunately, there was one major bug that completely wrecks the game for me in this department: headlights. When the headlights are on on certain races, the framerate seemingly drops – sometimes to nothing as the game waits for the vehicles to clear out. When they do, the video continues with you likely in a massive pileup off to the side of the race with other non-player vehicles. This alone made some races completely unplayable for me.

Audio was interesting in this game. The announcer was great and really added a humorous element to this game. The sound effects were OK, but the screaming from other drivers was a very nice touch. The music is touch and go depending on your system. If you are running this game from an older computer, then you could easily have a nice set of tracks to really help give this game a nice bit of oomph to the racing experience. If you are on a newer computer, however, the music will simply not work entirely. This is something I can’t fault the game for, though, as it was designed with Windows 98, at least, in mind. So, the music is pretty good if you can get it to work.

Overall, this was a fairly decent game when it’s working properly. I do like the maniac vibe I get from this game. The ability to turn and the frame rate drops to zero really killed a lot of enjoyability in this game, though, and dropping the graphic settings doesn’t seem to really help much in that problem. A decent overall quality of sound does help. One thing to keep in mind, though, is that games like Driver and Diddy Kong Racing were around in this era already, and, compared to those games, I would say this game is quite average.