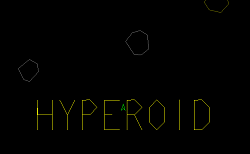 Hyperoid is an open source clone of the classic top-down shooter Asteroids. We take a look to see how this clone play today.

This clone was released in 1991 (as per about portion of this game). The game was created by a developer who wanted to create an arcade game that was enjoyable on Windows at the time. The developer made no secret that he based this game off of the original Asteroids game, but was kind enough to have released the source code for others to play around with.

The game starts off with your ship showing up green with the word “Hyperoid” appearing on screen. The name scrolls up and gradually disappears (as per the image I’m using for this review above). Everything about this is extremely simple vector based graphics, so it is a very simplistic game. As per what the developer says, the object of the game is to “shoot everything”. The main targets are the asteroids that fly around the screen.

By default, the controls are simple, but take a bit to figure out if you can’t understand the general documentation that was provided with this game. You can press tab to use one of the shields. “S” is used for your Smartbombs. Space is used to fire your main weapon (holding it down is ideal as you save mashing the space bar and fire at the fastest rate possible). One thing I should point out, though, is that your main weapon has a limited range, so you need to adjust your strategy and play accordingly. Down arrow is used to fire your main thruster, accelerating you forward. Up arrow for reverse thrusters and pushes your ship backwards from where it is facing. Think of it like a skateboard. To move forward, you push back and to move back, you push forward. The left and right arrow keys is used for turning your ship left or right respectively. When it comes to moving your ship, it’s all about momentum more than anything else. I found the ship difficult to fly, but it winds up being necessary in order to destroy the asteroids faster. The faster you clear out the asteroids, the better the chances of you surviving to the next level.

You’ll encounter many things while playing. The most obvious thing is the main asteroids. Destroying all the asteroids allows you to advance to the next level. If you shoot a large asteroid, this breaks the asteroid into smaller chunks that generally move along the screen faster. If the asteroids are broken up into the simple triangle shape small asteroids, one show will destroy what’s left. There is no difference between the dark yellow asteroids and the grey asteroids that I can tell.

Another object you’ll encounter is enemy ships. These ships will fly aimlessly and occasionally fire it’s own main gun randomly. Destroy these ships so you have one less distraction on screen.

Another object is this weird hourglass-like object that flies towards you. At first, one hit will typically destroy it, but in later levels, it requires multiple shots (each time you hit it, it changes to a different color if it’s not destroyed). Similarly, there are star-like objects that behave in much the same way as the hourglass objects. Again, earlier levels says that it takes one shot to destroy it while later levels requires you to hit it multiple times before it is destroyed.

Finally, there are green asteroids. If you take a little longer to complete a level, a green asteroid appears. This extremely small asteroids are annoying because if you don’t destroy them right away, they split in two periodically like a virus. It’s not so bad when you have two on screen, but when you have 6 of them on screen, they have a tendency to multiply faster than you can shoot them. The only saving grace about these asteroids is that it takes on hit to destroy.

As mentioned, your ship stars off appearing green. This green look is a shield that only takes affect for a very short period of time. After that, your ship turns white. As you take damage, the color of the ship turns to a darker grey until it finally breaks apart from too much damage.

In all, you have three lives as denoted by the hearts. If you run out of lives and die, your level counter will reset to the first level. Curiously, the asteroid on screen won’t go away. Instead, you simply start back on screen with all of your inventory reset along with the Hyperoid logo making a brief reappearance.

While you start with a shield activated, you’ll have three more shields in your inventory. These shields are useful for when you are about to be hit by something (typically the flying objects that target you specifically). They can save you a spare life or two in a pinch if you can hit tab fast enough.

One thing to note is that the playing field wraps. Any object that leaves the screen through the top will reappear on the bottom. This includes your ship. This is useful in that if you are being chased by a flying object (and are about to get hit), simply duck off the side of the playing field and reappear on the other side. The flying object will stop, turn around, and try and fly at you as you appear from the other side. This gives you a little more space to give it a few more necessary hits to destroy if when a smart bomb isn’t in your inventory. Unfortunately, that’s the only positive of slipping off screen. Often times, I found myself slipping off screen and reappearing right next to another asteroid, smacking into it and destroying my ship in the process. So, it’s a very difficult thing to work with and something that should be done sparingly (if at all).

There were negative aspects to this game, sadly. The main problem I have with this game is that when you go off screen, your ship doesn’t immediately appear on the other side. Instead, there seems to be a ribbon all the way around the outside of the play field that you have to traverse before reappearing on the other side of the screen. This can throw off calculations and limit your ability to wrap your shots around the screen as well. I don’t know why this sort of invisible dead zone was put in to the game, but it makes the game more difficult to play in a seemingly unnecessary way.

One nice feature I did like about this game was the ability to fully restart. Simply go into the drop down menu and click on “New Game!” and everything is destroyed on screen, thus wiping the slate clean for another attempt. This was a nice feature added because sometimes, I’m in a bad spot when I start a new game with the existing objects on screen.

One thing I didn’t quite understand was how one gets bonus items for your inventory. I think you sometimes get a free life if you get a high enough score, but I’m not really sure on that. Sometimes, a flying object smacks into me and I get awarded a smart bomb or extra shield. Other times, I simply get hit with one of those flying objects and get damage. Sometimes, I get both damage and more inventory. I’m, sadly, at a loss to explain that and am left to say that this is weird.

Graphically, this is about as basic a game can get. While it is a stark background (a blank background to be precise), the colors of all the objects sometimes are enough to make the screen feel busy. So, the black background, while not necessarily advised for most games, seems necessary here. I also like the effects of when something is destroyed. Some of the lines briefly fly around, simulating debris from something being destroyed. I thought that was a nice touch. I also like how as the bullets from your ship go further and further away, they become darker and darker, indicating a sort of subtle depth to the game. Not a bad idea to say the least.

There is no audio, so I can’t judge this game in the audio department.

Overall, this can be a nice little distraction that is not only accessible to new gamers, but also offers more challenge as you go up into the higher levels. There’s no high scores feature, so a score is practically meaningless, but it is interesting to see what is the highest level you can progress to before you either collide with an asteroid or simply die altogether. It is a kind of fun game even if everything appears to be very simplistic. A decent play.

Furthest point in game: reached all the way up to level 9.