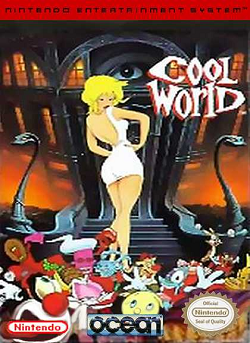 Cool World, based loosely on a movie, is a side scrolling action game based on the concept of an illustrator who’s creations have come to life.

This game was released in 1993 and would be an extension of the Cool World franchise. The premise of the movie and, consequently, this video game, is that an illustrator has been drawing cartoons. One day, he discovers that the cartoons have come to life. A whole world, Cool World, has subsequently been created. All this to stop one particular female cartoon character, Holli Would, who is attempting to retrieve the Golden Spike.

The player is initially greeted with a title screen. Once a game is started, Holli Would tells you to stop her if you can. At that point, you see a tornado hovering over a graphic of the first level. After that, you see the start of the first level where the tornado touches down and sets your character down onto the streets of Cool World.

The player initially has two weapons: an eraser that you throw at enemies and turn into life-awarding collectible candy and a bomb that you can use to apparently open up different parts of the game and kill off bad guys. In the level, you can collect a pen which can also be used as a weapon against enemies. If you fill up the pen, you can find an ink jar to empty it. Not only will you basically reload your pen, but also, you’ll be awarded some extra health in the process.

The goal in this level is to, apparently, enter the Slash club. The only hint of this would be the invulnerable bouncers standing outside. With the hint from a guide, I was able to find out that the bombs are actually stink bombs. You use one to bomb a trash can and move it in front of the club to separate the two bouncers and allow access.

From there, you make your way to a snake window at the top of the next level so you can navigate your way through a sewer level to, apparently, fight Slash, the boss of the level – not that I really made it far enough to fight him as I lost all interest in continuing the game.

Graphically, this game was OK. It wasn’t spectacular, but it also wasn’t abysmal either. A lot of the graphics are simple, but there is also a large amount of different kinds of graphics in this game as well that I noticed. So, average graphics.

The music of this game was good. Not something I would listen to on a regular basis by any means, but it can be enjoyable while you are playing. The sound effects, however, were less than stellar.

Overall, the controls were hard to work with. Sometimes, you hit B to attack and your character doesn’t attack, leaving you with the experience of having less health than when you started your cunning little attack. I wasn’t given any storyline and I wasn’t familiar with Cool World until I played this game. Because it uses a pen and paper, I thought this game was based on writing rather than illustrating given that pens are used to write words as well. I got to the end of the Streets level and wondered why the scrolling stopped after finding two manhole covers. If I didn’t have a guide, I probably would have never figured out how to get into the slash club. I knew that I needed to get into the Slash club after reaching the end of the level and remembering the bouncers. I even knew that I needed to use the trash can by pushing it, but beyond that, I didn’t really know what to do.

Even with help, I didn’t really “get” this game. There were a lot of odd things to see in this game like electrified vines, cars that are half your character height, and purple sewer water that damages you. So, it was a different experience playing this game. Still, I’m just left with an, “Um… OK…” feeling about all of this. Once I did some reading up on this, I knew that this game actually had a great premise, but it ultimately missed the mark entirely beyond the initial concept. I can see why something like this isn’t talked about any more. Even if you were better able to figure out how to get around, I don’t see how this game can be all that appealing. In short, not worth the time if you ask me.

Furthest point in game: Made it most of the way through the sewers level before losing interest.