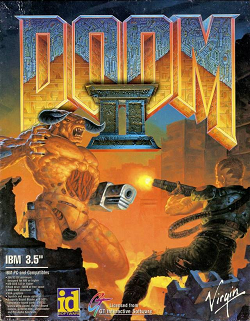 We review the sequel to one of the most classic First Person Shooter (FPS) games ever created. That’s right, today, we are taking a look at Doom II – a game that picks up where the original Doom left off.

The storyline picks up right after the events of Doom. Doomguy (as he is commonly referred to), returns to Earth to find out that the demons have opened a teleporter and have started to invade Earth (hence the name: Doom II – Hell on Earth). Those that survived the initial invasion are trying to escape, but the only way to accomplish that is to reclaim a spaceport that the demons have captured. After this, the Marine is informed that a gateway to hell was located and the only way to close it is through the other side. The only way to deactivate the teleporter is to kill the Icon of Sin, the largest demon ever shown in the series to this point.

The object is exactly like the original Doom, find the exit room and activate the switch found inside. Upon beating the first level, there is the first immediately apparent change in the game. While the game still tallies up a score where you get to find out how many of the total enemies you have killed, how many secrets you found, total time, etc., there is no graphical interface indicating where you have been to and where you are going like the original Doom. Instead, you just get placed in the next level. I was a little sad to see this change because I thought the graphical indicator of where you are headed next was an interesting way to indicate direction and show an overview of the world. That is now gone.

Since the events take place on Earth, there are maps that try to give a look and feel of a city instead of either a hell-like level or a rundown space station atmosphere. I’m not sure that some of these levels were entirely successful, though the map with the skyscrapers was certainly one of the better attempts.

Graphically, this game made pretty much no attempt to improve on what was found in the original Doom game. There’s some new textures and the look of some weapons have been altered, but that’s pretty much it. Considering some of the graphics of games being released by this point in time, I’d say the graphics are pretty decent since many games are still stuck in the 2D world.

The audio was an interesting element to this game. The music more or less took a back seat in this game, so nothing really stood out outside of adding a little bit of atmosphere to this game. The sound effects were, on the other hand, nicely done.

Overall, this game is pretty good. I think the original Doom was a little bit better given that some of the maps weren’t all that great in the sequel (namely town levels). Since little improvement to the game was added, I can say that this game can’t be any better than the original game. While the Icon of Sin monster was interesting in that it was basically a giant wall you were fighting, this game simply feels like an extra bunch of levels that were tacked on after the original Doom and little more. Still, a game worth playing nevertheless.

Furthest point in game: Beat the game on the easiest difficulty (yeah, I know, I’m a wuss). Didn’t have time to find out how many difficulties I can complete in this game.