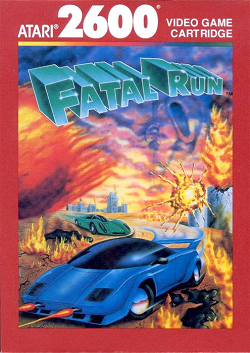 In this review, we push the needle in the Atari 2600 game Fatal Run. We give this racing survival game a try.

The objective of this game is very simple. You need to race to the end of the course to save people. The car you are driving can reach speeds of 200MPH. Even then, reaching the end of the road isn’t exactly easy.

Along the way, you’ll encounter enemy vehicles while will attempt to damage your vehicle. Luckily, you can attack back by pressing the button as you collide into them to take them out.

To make matters worse, there are also barricades that will damage you if you run into them. In addition to this are big splotches of oil on the ground aiming to slow you down and also damage your vehicle.

There is a collectible on the road that seems to net you some extra points. What else it does, I’m not entirely sure, though my best guess is that it offers a small repair to your vehicle.

If you manage to reach the end of the road, you’ll be given some separate points used to restore your vehicle. How many points you get depends on how quickly you get to the end. For every 5 or 10 points, you can restore an aspect of your vehicle. When you are ready to take on the next level, you can simply select “Go”.

You can earn regular points for accomplishing something. One way to earn points is to travel at the top speed of 200MPH for as long as possible. This will allow a slow trickle of points to head your way. Destroying enemy vehicles is probably the biggest source of points in the game, though. Also, running over collectibles will also net you some extra points as well.

This game has a lot going against it. The biggest pitfall of this game is that it is pretty hard to understand. It was luck that I was able to figure out how attack other vehicles with the button and ramming other vehicles.

Another thing that is difficult to understand about this game is how much you can attack. By the time I got to the second level, it seems as though my attack ran out. The only option available after that is to just ride on the shoulders and hope that you can just pass enemy vehicles. The amount of attack just doesn’t seem to be found anywhere.

Although you can repair your vehicle, the restoration process is split between four letters. What each letter stands for is, well, guesswork as far as I’m concerned. I can guess that F stands for Fuel and T stands for Tires. Beyond that, I really don’t know what the rest are for. Even then, I can’t be certain that my guesses are accurate.

One big feature with this game is the ability to save your progress. While a technological accomplishment for the Atari 2600, this feature is far from unprecedented from this point in history. Two years earlier, Zelda II – The Adventures of Link already boasted this feature. Even then, that is far from the first game to accomplish this feature.

Generally speaking, although this game does have some interesting features, this game may have been better served by utilizing more powerful systems that were around at the time. As it stands, a game that has potential is stuck with every conceivable obstacle imaginable. It is very dated for the time. In fact, it is probably a game that is more of a tech demo than an actual game.

Graphically speaking, this game is hit and miss. Although the lines on either side are smoothly animated, obstacles seem to just move at their own pace. The cars themselves can be made out with imagination, but are quite ugly. The backgrounds are smoothly animated for the turns, but are also fairly simplistic for the time.

There is music in this game. The menu tracks are decent enough, but there is no music in the game itself. The sound effects are also extremely basic for a game of its time.

Overall, this game is more of a tech demo than an actual game for its time. It is very dated when compared to other games floating around at the time. These games include Mega Man 2, Cobra Triangle, and Contra. This game shows that this console has reached the end of its life span and needs to retire. Though the save feature was a nice feature, it’s far from a novel one at the time of release. Some features were hard to figure out. Though the graphics were colorful and smoothly animated, objects seem to animate at their own pace. The cars were pretty ugly for a game of its time. Though some of the music was decently done for the system, it is still pretty dated. Sound effects were pretty low quality. So, I would say that this game should be passed over.